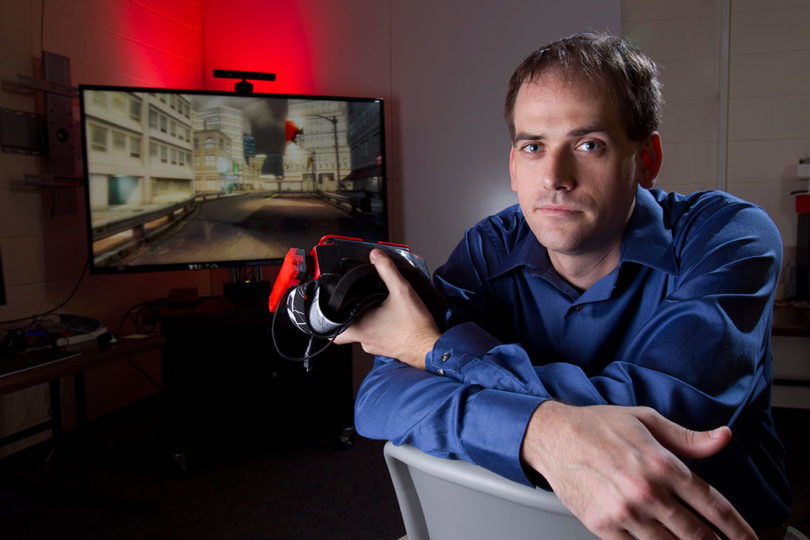 Athens, Ga. – Placing children into a mixed reality-part virtual environment and part real world-has great potential for increasing their physical activity and decreasing their risk of obesity, according to University of Georgia researchers.

Sixty-one Georgia 4-H’ers, 9-12 years old, participated in a study designed to increase awareness and reduce childhood obesity. Participants set goals for the amount of physical activity they wanted to complete throughout the day over a course of three days. An activity monitor was worn to track their activity.

Children were split into two groups but only one group was allowed to train, exercise and play with an obese, virtual dog. The pet, and overall game platform, was developed by an interdisciplinary group of UGA researchers from the College of Engineering, Grady College of Journalism and Mass Communication and the College of Veterinary Medicine. UGA Extension helped find participants for the study.

Researchers found the group of children allowed to interact with the virtual pet averaged 1.09 hours of additional physical activity per day when compared to the group without the pet. The results of the study were published in the April issue of the journal IEEE Transactions on Visualization and Computer Graphics.

Sun Joo “Grace” Ahn, an assistant professor of advertising in the Grady College and one of the lead researchers on the project, said one of the goals for designing the pet was to make sure that it didn’t just have a “cool effect.”

“We didn’t want children to approach the virtual pet and say ‘wow that’s really cool’ and then forget about it,” she said. “We really wanted them to integrate the virtual pet into their individual lives, their social lives and then bring it in as a part of their environment that enables them and encourages them to engage in physical activity.”

The children assigned to interact with the virtual pet were told that their physical activity would be used to improve the health of their individual dog, which they got to name and choose the color of its collar.

The interaction with the pet as well as the goal setting and checking was done using a kiosk. The kiosk setup included a television, a desktop computer and a Microsoft Kinect motion controller. Kyle Johnsen, an assistant professor in the College of Engineering, said the active interface was chosen so the children could interact with the virtual pet as if it were real.

For the group with the virtual pet, if their goal had been met, their dog would give them a congratulatory message and allow them to use controls to cause the dog to perform a trick. For example, if a child set a goal to complete 30 minutes of physical activity and met that goal, then the child would see a real time change in the pet’s physical appearance and response rate and be able to teach the pet to sit or roll over.

Johnsen said the children were allowed to unlock more sophisticated tricks, such as fetch and moonwalk, as they met more of their goals. However, the interaction between the child and the dog lasted no more than five minutes as to minimize screen time.

If goals were not met, the dog would encourage them to participate in more physical activity to meet their goals. Children in the group without a virtual pet would receive the same verbal feedback for completing or not completing their goals, but the verbal response would come from the computer system.

Johnsen said the next steps are to expand the study’s size and duration to better determine how to efficiently use the virtual pet to battle childhood obesity.

“I really believe that emerging technology is able to help people make better decisions and make behavioral changes for the better,” Ahn said.

The UGA Obesity Initiative funded this study. This initiative was launched in January 2012 to help the state address growing childhood and adult obesity. For more information on the obesity initiative, see http://obesity.ovpr.uga.edu/.

Other UGA contributors include: Tom Robertson, an associate professor of physiology and pharmacology; James Moore, a professor of large animal medicine; Scott Brown, the Edward H. Gunst Professor of Small Animal Medicine; Amanda Marable, an Extension 4-H specialist in the College of Agricultural and Environmental Sciences; and Aryabrata Basu, a graduate student in the Franklin College of Arts and Science department of computer science.