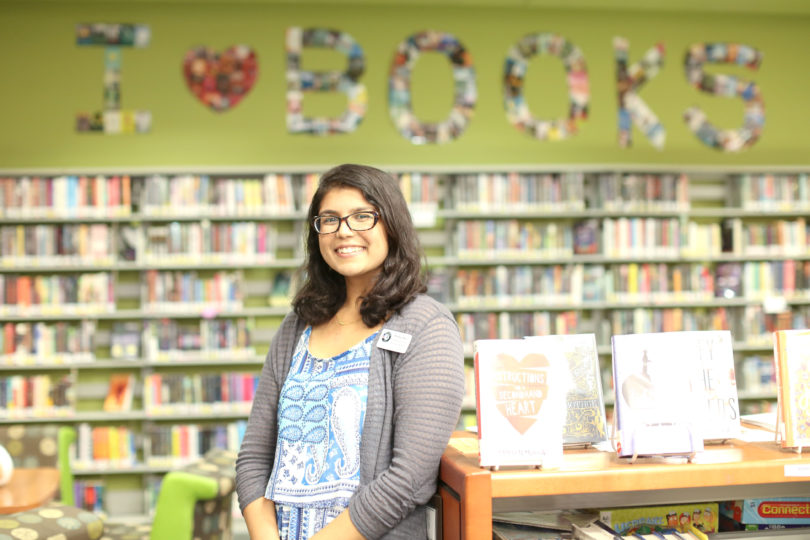 VISTA volunteer Nishat Sial works at the ACC Library this year. Sial increased teen programing at the library by partnering with other community non-profits, business leaders and UGA to bring resources to the library. (Shannah Montgomery/UGA)

On weekdays, the Athens-Clarke County Library on Baxter Street is a popular destination for students from nearby Clarke Middle and Clarke Central High schools. 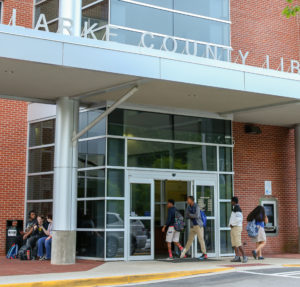 More than 5,000 middle and high school students have participated in more than 200 after-school programs offered at the library so far this year.

And this year, after the University of Georgia’s Office of Service-Learning placed an AmeriCorps VISTA (Volunteers in Service to America) staffer at the library, the place has hummed with activity. Now, sixth- to 12th-grade students are playing chess, painting with water colors and learning how to play drums, among other things. More than 5,000 middle and high school students have participated in more than 200 after-school programs offered at the library so far.

“It was momentous year for the young adult department,” said Devera Chandler, teen services coordinator for the Athens Regional Library System, which includes four library branches in Athens and seven branches in surrounding communities. “We are hitting above the national average in attendance for programs.”

Nishat Sial, a 2017 UGA graduate, was selected as an AmeriCorps VISTA volunteer and was assigned to the library last July.

Charged with finding activities that would engage teenagers, Sial reached out to community leaders, local businesses and UGA organizations, asking them to volunteer their time and expertise to provide meaningful after-school programs at the library. The response, she said, was tremendous.

“I’ve learned there are so many people willing to contribute in the community,” Sial said. “It’s just a matter of identifying and utilizing those resources to empower others.”

About 72 volunteers signed on to work with the teens and the activities varied greatly. EcoReach, a UGA organization with student members mostly from the Odum School of Ecology, holds environment-centered programs once a month. The mission of EcoReach is to raise awareness and enthusiasm for science among school-age children through fun, hands-on activities. 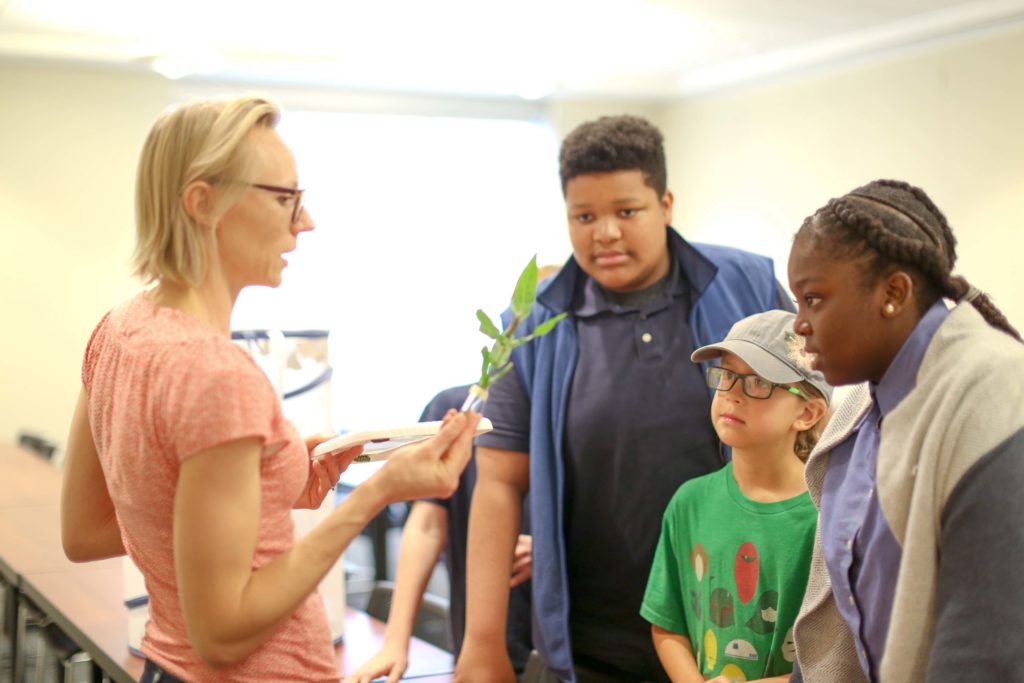 EcoReach is one of many programs brought to the library. It is a UGA organization made up primarily of Odum School of Ecology students, with a mission to raise awareness and enthusiasm for science among school-age children through leading them in fun, hands-on activities

“I like that the programs are fun and innovative,” said Antonio Starks, an eighth-grade student from Clarke Middle School. Antonio is at the library most afternoons and recently participated in an EcoReach program on butterflies, which examined caterpillars and taught students about the life cycle of the insect.

In addition, the library hosted a Bling-Your-Prom event in January, offering free dresses, suits, shoes, accessories, ties, makeup and jewelry to teens. More than 500 materials were donated for teens and 123 high school students showed up to prepare for prom. Volunteer seamstresses offered alterations, and all event attendees received a voucher for a free book. All unused items were kept for next year’s Bling-Your-Prom, donated to high schools or donated to Project SAFE, a charity dedicated to ending domestic violence.

“Seeing the kids’ reaction was priceless,” said Chandler, who, with Sial, made the library look like a store, with racks of clothes and makeshift dressing rooms. Bling-Your-Prom is something Chandler had wanted to do for several years, and she was able to make it happen with Sial recruiting volunteers and identifying community partnerships. The event was such a success the library plans to make it an annual event.

Sial had committed to the VISTA program before she graduated with a degree in English.

“What drew me to apply to the VISTA program was that it was specifically designed to fight poverty through capacity building and identifying long-term solutions,” Sial said. “The opportunity to go into something like that was appealing to me.”

“The VISTAs are a great addition to UGA and to the local community and they complement work already being done by faculty and students,” said Shannon Wilder, director of the Office of Service-Learning. “It is exciting to see Nishat bring so many volunteers together to share their talents and expertise with Clarke County teenagers.”

Even more students are flocking to the library now, Chandler said, and instead of just hanging out they are taking advantage of the resources that it has to offer.

“We are increasing literacy and changing the perception of what a library is today,” Chandler said. “That’s what having a VISTA member has enabled us to do.”

Having the planned programs also addresses a financial problem that loomed over the county. The library had estimated it would need $38,000 for additional security to manage the after-school crowds. Hearing that, Clarke County Commissioner Kelly Girtz, now Athens mayor-elect, organized a meeting between the library and the OSL, which resulted in the new VISTA position. Clarke County is funding the position, about $13,000 a year—significantly less than what additional security would cost.

“It’s been so successful I want to see it sustained permanently,” Girtz said. “As long as there are (teenagers), there is a need.”

Established in 1965, the AmeriCorps VISTA network connects volunteers with organizations that help to alleviate poverty. VISTA members design long-term, sustainable solutions to problems, recruiting other volunteers and strengthening communities by offering new services. VISTA members serve typically for a year, although some positions may be shorter. Sponsors, like the UGA Office of Service-Learning, supervise and mentor VISTAs during their assignments.

Since 2013, the Office of Service-Learning has coordinated VISTA volunteers to help campus organizations, like the UGArden and the Campus Kitchen at UGA; and community organizations like the Clarke County Mentor Program, the Athens Community Council on Aging and the library.