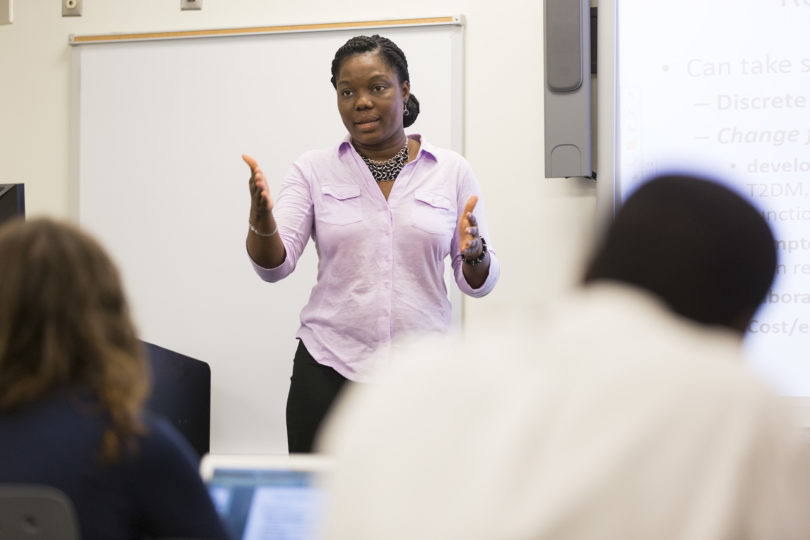 Athens, Ga. – A University of Georgia researcher has found that low levels of vitamin D may limit the effectiveness of HIV treatment in adults.

Those with human immunodeficiency virus—commonly known as HIV—often struggle with declining health because their immune systems can’t effectively respond to common pathogens. Their immune statuses, usually measured by CD4+T cells, normally improve when given HIV treatment.

“Because of the immune-destroying effects of HIV, infection usually results in relatively quick death without treatment. The magic of antiretroviral therapy, the name for drugs to treat HIV, lies in its ability to restore immune function,” said study co-author Amara Ezeamama, an assistant professor of epidemiology and biostatistics in the College of Public Health.

“With antiretroviral drugs, people with HIV are beginning to live longer lives. Our goal was to understand whether vitamin D deficiency limits the amount of immune recovery benefit for persons on HIV treatment.”

The findings were published recently in the journal Clinical Nutrition.

Ezeamama conducted an 18-month longitudinal study in which the immune status of 398 HIV-positive adults was measured at 0, 3, 6, 12 and 18 months. The researchers, through observation, related the rise in immune function to whether or not individuals had adequate levels of vitamin D.

“HIV destroys the capacity of the body to mount effective response to pathogens,” Ezeamama said. “Given different vitamin D levels, HIV-positive adults recovered at different rates. We found a relationship between vitamin D and CD4+T cells.”

During the study, the participants were observed while on highly active antiretroviral therapy, or HAART, which normally consists of three or more drugs and is currently the most common—and most effective—treatment for HIV-positive adults. Those on HAART take it daily.

“It’s a cocktail of several medicines that controls the virus,” Ezeamama explained. “In addition to HAART, ensuring vitamin D sufficiency may also be helpful in restoring immune function.

“As researchers, we want to know what we can do to help. Vitamin D is relatively cheap. If we intervene with it, it could give individual HIV-infected persons a modest immune recovery bump that will likely translate to big public health impact.”

In the future, Ezeamama wants to look at how vitamin D affects immune recovery and long-term health outcomes in HIV-positive children.

“We are now in an era of hope for persons with HIV,” she said. “We know that HIV treatment works, and now people can live for several decades with HIV. We can further delay the progress of the disease and maintain survivors on a higher quality of life if we understand the factors that limit the effectiveness of HIV treatment.”

The study, “Vitamin-D deficiency impairs CD4+T-cell count recovery rate in HIV-positive adults on highly active antiretroviral therapy: A longitudinal study,” is available at www.sciencedirect.com/science/article/pii/S0261561415002289. The research was supported by grants from the Eunice Kennedy Shriver National Institute of Child Health and Human Development of the National Institutes of Health under award number R01HD060333.