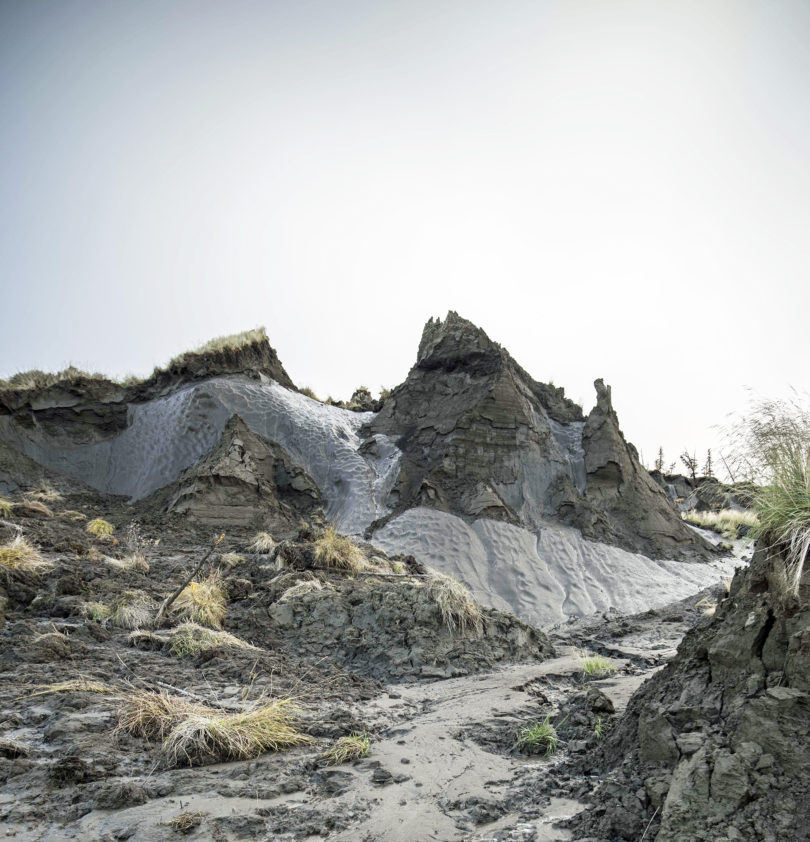 A bank of permafrost thaws near the Kolyma River in Siberia.

Savannah, Ga. – While climatologists are carefully watching carbon dioxide levels in the atmosphere, another group of scientists is exploring a massive storehouse of carbon that has the potential to significantly affect the climate change picture.

University of Georgia Skidaway Institute of Oceanography researcher Aron Stubbins is part of a team investigating how ancient carbon, locked away in Arctic permafrost for thousands of years, is now being transformed into carbon dioxide and released into the atmosphere. The results of the study were published in Geophysical Research Letters.

The Arctic contains a massive amount of carbon in the form of frozen soil—the remnants of plants and animals that died more than 20,000 years ago. Because this organic material was permanently frozen year-round, it did not undergo decomposition by bacteria the way organic material does in a warmer climate. Just like food in a home freezer, it has been locked away from the bacteria that would otherwise cause it to decay and be converted to carbon dioxide.

“However, if you allow your food to defrost, eventually bacteria will eat away at it, causing it to decompose and release carbon dioxide,” Stubbins said. “The same thing happens to permafrost when it thaws.”

Scientists estimate there is more than 10 times the amount of carbon in the Arctic soil than has been put into the atmosphere by burning fossil fuels since the start of the Industrial Revolution. To look at it another way, scientists estimate there is two and a half times more carbon locked away in the Arctic deep freezer than there is in the atmosphere today. Now, with a warming climate, that deep freezer is beginning to thaw and that long-frozen carbon is beginning to be released into the environment.

“The study we did was to look at what happens to that organic carbon when it is released,” Stubbins said. “Does it get converted to carbon dioxide or is it still going to be preserved in some other form?”

Stubbins and his colleagues conducted their fieldwork at Duvanni Yar in Siberia. There, the Kolyma River carves into a bank of permafrost, exposing the frozen organic material. This worked well for the scientists, as they were able to find streams that consisted of 100 percent thawed permafrost. The researchers measured the carbon concentration, how old the carbon was and what forms of carbon were present in the water. They bottled it with a sample of the local microbes. After two weeks, they measured the changes in the carbon concentration and composition and the amount of carbon dioxide that had been produced.

“We found that decomposition converted 60 percent of the carbon in the thawed permafrost to carbon dioxide in two weeks,” Stubbins said. “This shows the permafrost carbon is definitely in a form that can be used by the microbes.”

Lead author Robert Spencer of Florida State University added, “Interestingly, we also found that the unique composition of thawed permafrost carbon is what makes the material so attractive to microbes.”

The study also confirmed what the scientists had suspected: The carbon being used by the bacteria is at least 20,000 years old. This is significant because it means that carbon has not been a part of the global carbon cycle in the recent past.

“If you cut down a tree and burn it, you are simply returning the carbon in that tree to the atmosphere where the tree originally got it,” Stubbins said. “However, this is carbon that has been locked away in a deep-freeze storage for a long time.

“This is carbon that has been out of the active, natural system for tens of thousands of years. To reintroduce it into the contemporary system will have an effect.”

The carbon release has the potential to create what scientists call a positive feedback loop. This means as more carbon is released into the atmosphere, it would amplify climate warming. That, in turn, would cause more permafrost to thaw and release more carbon, causing the cycle to continue.

“Currently, this is not a process that shows up in future (Intergovernmental Panel on Climate Change) climate projections; in fact, permafrost is not even accounted for,” Spencer said.

“Moving forward, we need to find out how consistent our findings are and to work with a broader range of scientists to better predict how fast this process will happen,” Stubbins said.

In addition to Stubbins and Spencer, the research team included Paul Mann from Northumbria University, United Kingdom; Thorsten Dittmar from the University of Oldenburg, Germany; Timothy Eglinton and Cameron McIntyre from the Geological Institute, Zurich, Switzerland; Max Holmes from Woods Hole Research Center; and Nikita Zimov from the Far-Eastern Branch of the Russian Academy of Science.

Skidaway Institute of Oceanography
The Skidaway Institute of Oceanography is a research unit of the University of Georgia located on Skidaway Island near Savannah. The mission of the institute is to provide the state of Georgia with a nationally and internationally recognized center of excellence in marine science through research and education. For more information, see www.skio.uga.edu.