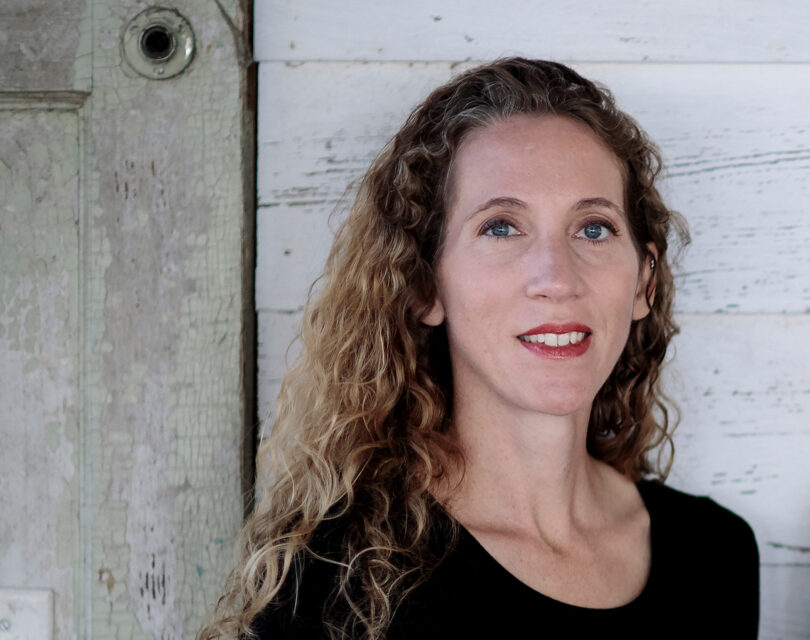 The research and outreach of the University of Georgia’s Elizabeth McCarty has helped keep more than 150,000 towering hemlocks across the eastern United States healthy, all while minimizing the use of insecticide.

McCarty, an assistant professor in the Warnell School of Forestry and Natural Resources, developed a method to optimize the dosing of an insecticide that controls a pest from Asia that has devastated hemlocks from the north Georgia mountains to Maine.

The trees require treatment every five to seven years, meaning that insecticides targeted against the invasive hemlock wooly adelgid (pronounced uh-del-jid) provide only a partial victory. Still, the destruction caused by the hemlock wooly adelgid is emblematic of the complexity of the challenges that are facing U.S. forests, which—depending on their location and management plan—provide recreation, habitat, clean water and nearly $22 billion in annual revenue from timber and related industries in Georgia alone. 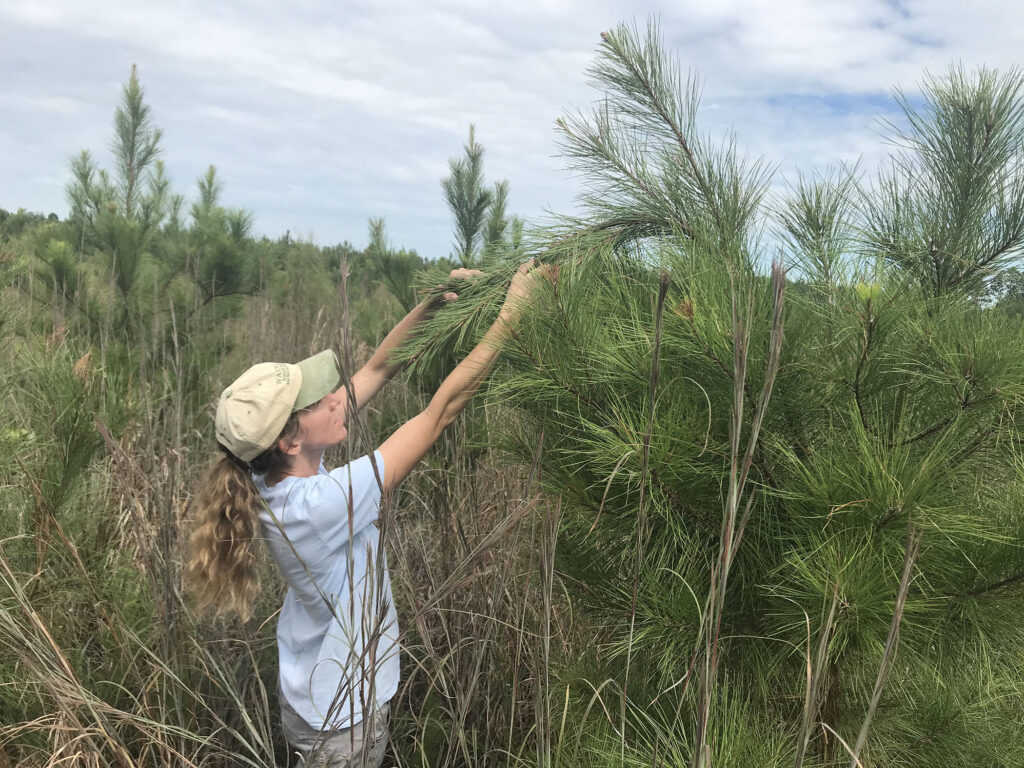 Elizabeth McCarty and her colleagues are evaluating control strategies for the Nantucket pine tip moth, which damages the growing tips of young pine trees. (Submitted photo)

In a field where there are no easy answers, McCarty helps landowners and managers make decisions that are informed by research.

“It really takes intentional decisions on our part to ensure that forests are actually healthy systems,” McCarty said. “There are benefits and consequences to every single management decision that gets made.”

Accidentally introduced to the United States from Asia and discovered in the 1950s, the hemlock wooly adelgid is a diminutive insect roughly the length of a pencil lead. They pierce branches to feed on sap and quickly multiply, forming distinctive white wooly masses. With few effective predators in the eastern U.S., they can kill trees in as little as three to five years in the southern Appalachians, or over a longer period of time in more northern areas with cooler climates. In some areas, such as along the Blue Ridge Parkway and in Shenandoah National Park, up to 80% of hemlocks have succumbed to infestation.

McCarty began working on the problem as a graduate student and developed an efficient, targeted dosing system based on the diameter of a given tree. The insecticide is applied at the base of the tree and drawn up into the plant. Using the appropriate dosing maximizes the effectiveness of the insecticide while reducing pesticide input into forest systems. 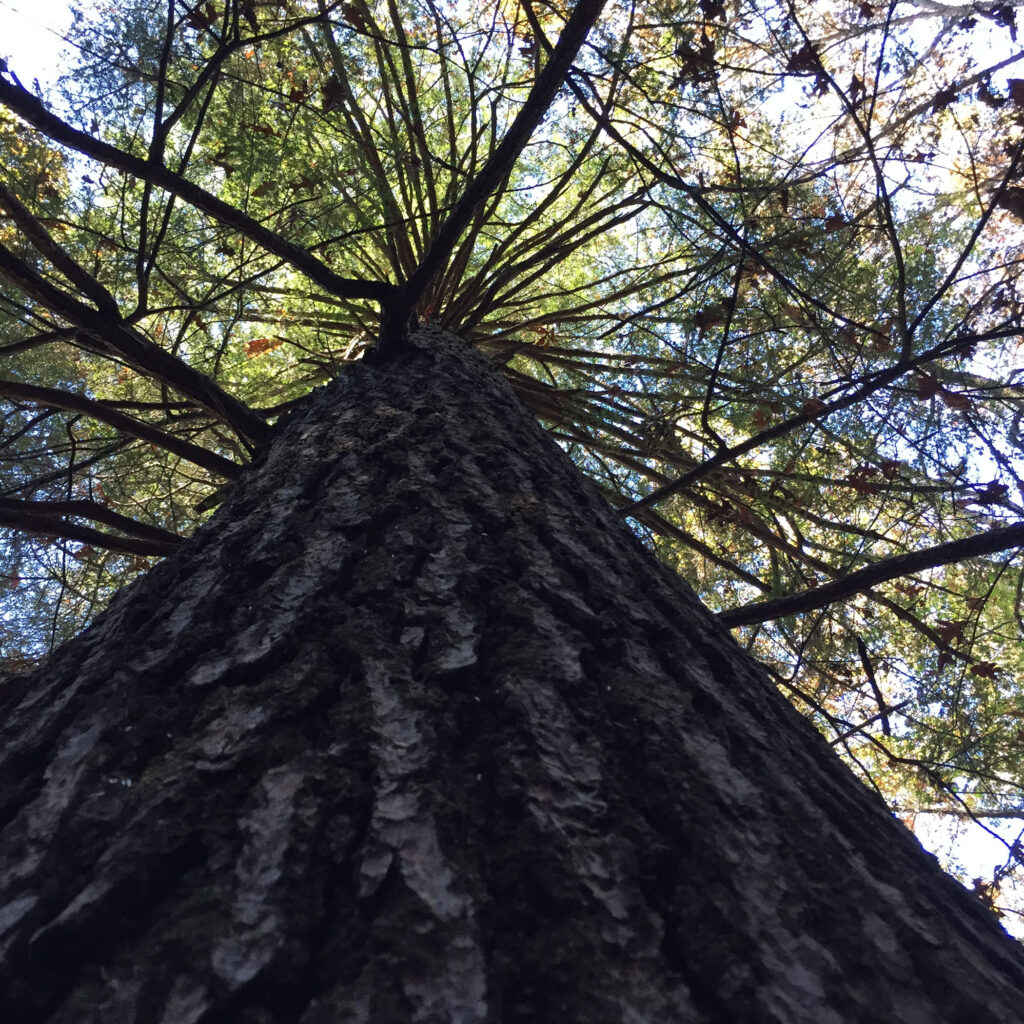 The invasive hemlock wooly adelgid can kill hemlock trees in as little as three to five years in the southern Appalachians, or over a longer period of time in more northern areas with cooler climates. (Submitted photo)

Rather the simply publishing her finding in a scientific journal, she developed and disseminated simple, practical outreach documents and partnered with the Tennessee Division of Forestry to put her findings into action. Her protocol has since been adopted by several state agencies and has been recommended by the National Forest Service.

“One thing I love about my job is that I get to have both sides of that coin,” she said. “I get to do the research, but I also get to work with the people on the ground and talk with them about what they need.”

In addition to continuing her research and outreach on hemlock wooly adelgid control, McCarty also partners with industry, state and federal agencies on research with implications for the economic vitality and sustainability of the region’s pine forests.

Through the Warnell School’s Southern Pine Health Research Cooperative, which she co-directs, she and her colleagues are battling the Nantucket pine tip moth, which damages the growing tips of young pine trees and has vexed pine producers for decades.

“I just want to let y’all know that I don’t think I’m going to solve this problem,” she recalls telling a group at a conference several years ago. “We’re going to add information to help us make good decisions.”

With a better sense of what they are up against, McCarty and her colleagues are currently assessing the effectiveness of different insecticides and weighing them against their environmental consequences. They’re also looking at the susceptibility of different genetic lines of loblolly pine to the moth.

The university’s statewide network of Extension agents has been an essential component of both her research and outreach, and it also connects her with schools, community groups and homeowners across Georgia. McCarty develops and delivers programs and materials that help landowners improve the health of their ecosystems by planting trees and shrubs that benefit pollinators, for instance, or creating nesting boxes known as “bee hotels.”

“We want to keep problems from happening, but we also want to lift things up and make areas better,” McCarty said. “And I think a lot of people don’t realize that they have the power to do that in their own spaces.”