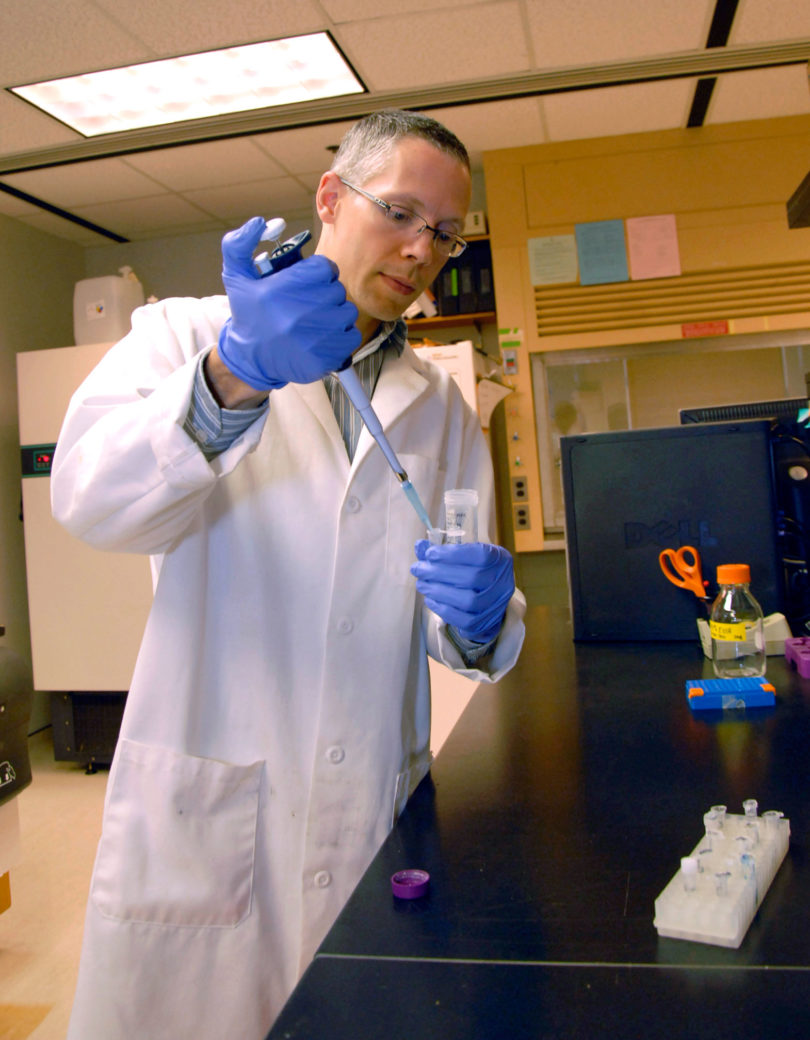 Athens, Ga. – A University of Georgia graduate student in forestry has been awarded a pre-doctoral fellowship by the U.S. Department of Agriculture’s National Institute of Food and Agriculture. Michael Bordeaux, a doctoral candidate in UGA plant scientist Jeffrey Dean’s lab, received $63,000 for his research on the exotic invasive woodwasp Sirex noctilio.

The National Institute of Food and Agriculture, or NIFA, gives training and development awards to pre- and postdoctoral students planning to pursue careers in plant and animal health, food safety, forestry, renewable energy or agricultural systems. Its Agriculture and Food Research Initiative, or AFRI, places a high priority on research, education and extension through its competitive grants program.

“While I felt we were working on an important problem all along,” Bordeaux said of his woodwasp study, “it was overwhelming to learn the USDA agreed and wanted to fund this research.”

Bordeaux, a student in the UGA Warnell School of Forestry and Natural Resources, studies Sirex noctilio, which was first detected in the U.S. in 2004 and identified in 2005. The woodwasp attacks and kills healthy, living pines. Losses of up to 60 percent of North American pines have been recorded where the woodwasp has been introduced. The combination of venom and the insect’s fungal symbiont is lethal to trees.

Working in Dean’s lab, Bordeaux is studying both the biochemical makeup of the insect’s venom and, at a molecular level, the pine’s response to the venom and the pathogen. Dean’s lab previously developed a pine microarray that allows assessment of the venom’s effects on the expression of thousands of pine genes simultaneously. Using the list of responding genes identified with the microarray in combination with chemical information on the activity of the venom itself, Bordeaux hopes to discover the mechanism of the venom’s ability to weaken pine defenses.

“The toughest type of project for a graduate student to tackle is one in which there is no prior experience in the laboratory,” Dean said. “Michael has persevered through a lot of difficult times in order to establish this study system, and I couldn’t be more proud that the USDA panel saw fit to reward his hard work with this funding.”

Another aspect of the woodwasp pathology that Bordeaux hopes to understand is the risk it poses to Southern pines. Collaborating with Kamal Gandhi, a Warnell School forest entomologist, he is using genetic biomarkers he developed to assess the susceptibility of six Southern pine species to Sirex.

“Ultimately we hope to be able to offer landowners information as to which pine species they could plant to reduce potential mortality in their stands,” Bordeaux said.

“Michael is absolutely deserving of the USDA-NIFA fellowship,” Gandhi said, “as he has demonstrated the scholarship, intellect and tenacity to tackle such a complex project that encompasses many fields on an important forest insect. I have been privileged to be a part of Michael’s graduate career at UGA, and this fellowship will allow him to grow as a scientist and achieve his career goals.”

Bordeaux also is using funding from the project to expand general knowledge of insect venoms.

“Our knowledge of hymenopteran venoms has been limited until now to one major suborder,” he said. “There has been no sequence information available for the second branch of the order Hymenoptera, the Symphyta, to which Sirex belongs. We are filling this gap of knowledge by sequencing genes expressed in the venom glands of Sirex noctilio. In addition to helping us identify the active principal in the woodwasp venom, this information will benefit future studies in comparative genomics of the entire Hymenopteran family, which includes bees, ants and wasps.”

Bordeaux said work on this project satisfies many of his own highest values for science.

“I think everyone wants a problem that uncovers basic knowledge while simultaneously identifying solutions to real world problems,” he said. “Additionally, because the Sirex problem touches so many disciplines, it has allowed me to train in microscopy, microbiology, entomology, molecular biology, biochemistry and plant pathology. I then get to pass this training on to undergraduates, hopefully to stimulate their interest as well.”

AFRI, NIFA’s competitive grant program, was established under the 2008 farm bill to fund research in critical areas of plant and animal health, agriculture and renewable energy.