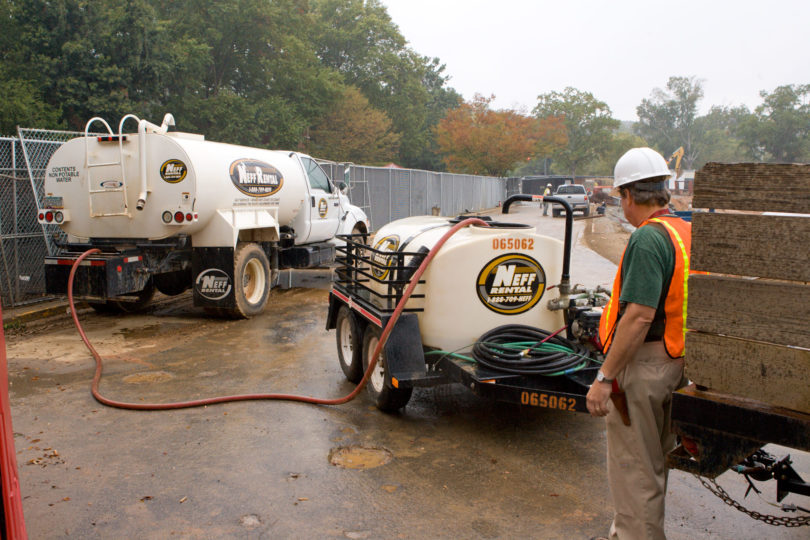 Groundskeeper William Childs transfers water from a large tanker truck to a smaller plastic water tank on a trailer. He then uses the recaptured water to hydrate campus plants and trees. Construction workers at the site of the Tate Student Center expansion have been pumping ground water from beneath the water table into a large tanker truck. After using the water for various projects on the site

Not being able to water the pansies in the Herty Field flower bed is nothing new to Dexter Adams, director of the Physical Plant’s grounds department.

Adams said he’s seen droughts and complete watering bans before, but not even being able to plant pansies is a twist that’s completely new to him. The current severe drought affecting campus as well as much of the Southeast has Adams and many other UGA officials thinking that water conservation issues will continue to arise in the future.

With less than a reported three-month supply of water left in North Georgia reservoirs, UGA’s Physical Plant has taken action to do everything in its power to conserve water: seeking out and fixing leaks, speeding up plans to convert to water-saving fixtures and scrapping many landscaping plans, according to  Ralph Johnson, associate vice president of the Physical Plant.

At a campus noted for its postcard-perfect scenes, exotics like Japanese Katsura trees that require more than rain water have fallen by the wayside because drinking water, not landscaping, is the priority.

“It’s a drill we’re familiar with,” Adams said. “And cutting back even to once a week, we can still sustain plants on campus.”

Adams said that all planned landscape work has been cancelled, and the flower program has been axed because the flowers require water that is simply not available.

In fact, many grounds department employees typically engaged in landscaping duties have been reassigned to other grounds-related activities including maintaining benches, post and chains and trash cans.

Landscaping tasks do remain, including prepping plants and grounds for winter with mulch and top-dressing.

Tree crews also continually check the health of on-campus trees, some of which have been stressed by the drought.

“We’re seeing damage,” Adams said. “We’re not seeing a lot of outright death, but what we’re losing are the mature, established trees, the cumulative effect of recent drought cycles.”

The parched red maples and water oaks, some of which have shed their leaves early because of the lack of water, are getting some water moisture despite the complete outdoor watering ban and lack of adequate rainfall—just not any municipal water.

For now, water drawn from Lake Herrick is used to keep some of the newly planted trees alive—that water use is restricted solely for this purpose.

Adams said that the lake water is restricted to “only what one person can pump and haul. We don’t want to draw down Lake Herrick too much.”

A construction site provides the grounds department with its other main source of water for campus trees and plants.

Construction at the Tate Student Center expansion captures more water than it uses and gives the grounds department a surplus of about 5,000 gallons  a week—enough to water 30 to 40 trees a day.

Situated on one of the lowest parts of campus, the student center addition is located about 6 feet above the water table, so any digging deeper than 6 feet at the site, which years ago used to be a creek bed, will hit water.

The site is also home to a steam condensate pit, a relic of the old Stegeman Hall. The pit connects the condensation gathered from the steam pipes that weave throughout campus heating water.

Because of the construction, the steam pit will be moved 120 feet to fit under the ramp in the first level of the two-level parking deck over which the student center expansion will be built.

The water repurposing program at the site of the student center expansion is not adding additional expense to the project, according to Joe Powell, project architect in the facilities planning office.

The water, which floods in overnight, would have to be pumped out anyway for construction to continue, he said.  If it weren’t for the drought, the water, which is similar to storm water, would be pumped into a nearby Tanyard Creek. Instead, the construction operation uses the water for flushing out new pipes, cleaning tools and keeping dust under control.  Leftover water, which averages around 1,000 gallons a day, is given to the Physical Plant’s grounds department to use for watering trees and plants.

The only public water the operation uses is for mixing cement, a process that requires clean water. If the drought worsens, causing the construction crew to stop using utilities water to mix cement, the project will see an added expense in either trucking water in or installing filters to clean the ground water—it’s a situation project leaders are already beginning to think about.

As for the Physical Plant, long-term plans include significant reductions in irrigation application rates and utilizing a lot more native plants and grasses that don’t need irrigation, just rainfall. Adams said the department is looking to collect rainwater on North Campus to help water the Founders Garden and the department is beginning to look into using air conditioning condensate, which may provide a supplemental water for campus greenery.

“We’ll probably rethink the campus landscape based on this experience,” he said. “I think this is going to be a repeat. I think we’re going to have this problem more frequently, and it’s our obligation to plan for that.”