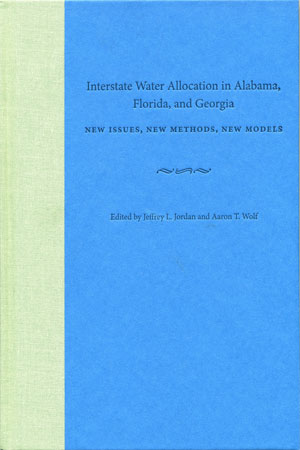 Water is the immigrant of choice. As it crosses political boundaries, it provides power, human sustenance and environmental health to the regions through which it threads.

The problem is that everyone wants a drop of it. And the rain-drenched Southern states of Georgia, Florida and Alabama keep a Hatfields-and-McCoys-like feud in full swing over who gets what share of the liquid gold.

In Interstate Water Allocation in Alabama, Florida, and Georgia, a tribe of authors unpacks the issues, methods and political pedaling that swirls over one of the most quarrelsome and long-lasting H2O debates in history. The book is edited by Jeffrey L. Jordan, professor of agricultural and applied economics in UGA’s College of Agricultural and Environmental Sciences.

Like most drawn-out feuds, the debate has its cast of colorful characters ranging through the rungs of federal and state bureaucracy, but make no mistake: It’s not entertainment. Aimed at researchers and interested parties, the book includes 11 chapters written and edited by scholars about the ins and outs of the debates and possibilities for alleviating shortcomings in the future.