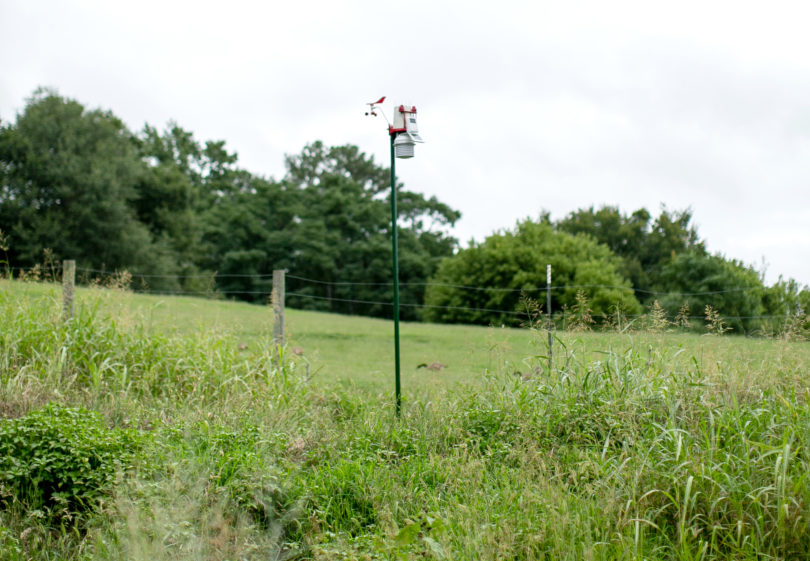 A weather station was installed at the State Botanical Garden. The station links to the internet and provides tools such as text alerts for changing weather conditions and forecasts. Users can also replay time-lapse videos from attached webcams.

The stations, donated by WeatherStem CEO Edward Mansouri, were installed in the State Botanical Garden and on the main campus in early August. The station links to the web and provides tools such as text alerts for changing weather conditions and forecasts. Users can also replay time-lapse videos from attached webcams.

Marshall Shepherd, Georgia Athletic Association Distinguished Professor and director of UGA’s Atmospheric Sciences Program in the Franklin College of Arts and Sciences, worked with Mansouri to have the station in place before the start of the fall semester so that he could use the data in his class on urban climate.

“From a research standpoint, it is rare to have a good network of weather observations in an urban area like Athens,” Shepherd said. “Typically, weather stations are in more rural, open-space areas or airports. There’s also potentially a broad benefit for our emergency preparedness and weather warning efforts in the community.”

The WeatherStem also includes a Football Weather Almanac that can be used to pull up the weather information for any UGA home game since 1954.

In addition to the stations at the State Botanical Garden and atop the geography-geology building on the main campus, UGA Emergency Operations Manager John Newton said they hope to add stations to other areas of the main campus and to the extended campuses to make them more useful for research, teaching and promoting emergency preparedness.

“This is something, I think, that would cross the needs of students, faculty, staff, academics, research, service and outreach to the community,” Newton said. “I just think it is something that crosses all those boundaries.”

Practical applications for the data include using it to monitor heat indexes that could affect athletes and grounds workers as well as advise students whether to take an umbrella when they head out to classes. The stations also provide alerts when lightning strikes are nearby.

The stations also have a customized set of probes and sensors to monitor soil temperature and soil moisture-information especially relevant to the botanical garden.

Wilf Nicholls, director of the State Botanical Garden of Georgia, a UGA Public Service and Outreach unit, said the station likely would be a draw for visitors, both on site and online.

“People from all over the place can watch the garden grow,” Nicholls said. “It gives us a little bit more accuracy but it also gives other parts of campus data they can use.”