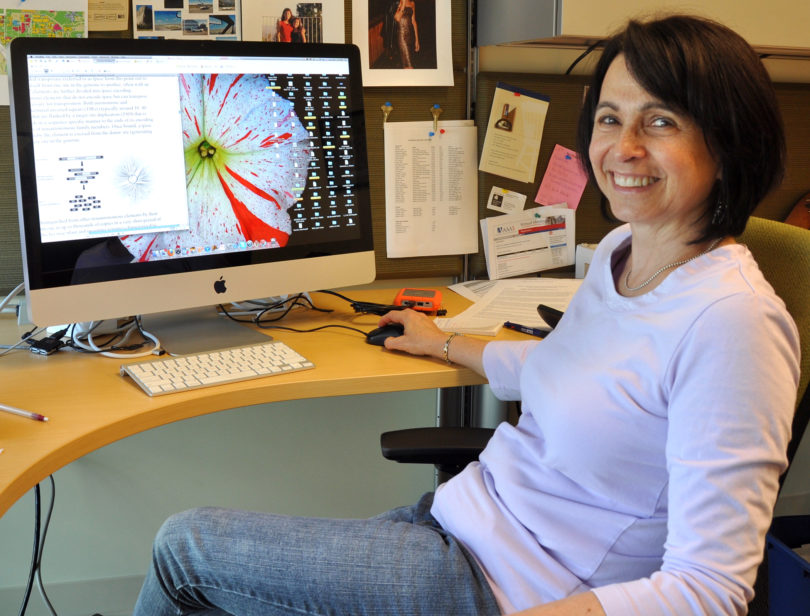 Athens, Ga. – Susan R. Wessler of the University of California, Riverside has been awarded the McClintock Prize for Plant Genetics and Genome Studies, an honor given annually by the Maize Genetics Executive Committee, or MGEC.

The announcement was made Oct. 28 by Jeff Bennetzen, MGEC member and the Norman and Doris Giles Professor of Genetics and Georgia Research Alliance Eminent Scholar at the University of Georgia.

The committee chose Wessler, a Distinguished Professor of Genetics, in recognition of her scientific achievements. A molecular geneticist, she has been one of the nation’s leaders in the study of plant transposable elements for the last three decades—specifically on the roles of plant transposable elements in mutation, genome evolution and adaptation. Transposable elements are fragments of DNA that can insert into new chromosomal locations and often duplicate themselves in the process. They account for at least 45 percent of the human genome and over 80 percent of some important plant genomes including maize, wheat and barley.

“For several decades, Sue Wessler has been the world leader in the study of the mobile DNAs that are the major drivers of plant genome evolution, so her recognition with the McClintock Prize is highly deserved,” Bennetzen said.

Wessler began her career at the University of Georgia in 1983 and worked in various capacities at the university—including director of the Center for Plant Cellular and Molecular Biology and UGA Foundation Chair in Biological Sciences—until she joined the faculty of UC Riverside in 2010. Her laboratory has pioneered the use of computational and experimental analyses in the identification of actively transposing elements.

The home secretary of the U. S. National Academy of Sciences, Wessler graduated with a bachelor’s degree in biology from Stony Brook University, of the State University of New York, in 1974 and earned her doctoral degree from Cornell University in 1980.

Barbara McClintock (1902-1992), one of the world’s most distinguished cytogeneticists and one of the foremost women scientists in 20th century America, is most noted for her pioneering research on transposable elements in maize. For this work she was awarded the Nobel Prize in Physiology or Medicine in 1983. She was the third woman to receive an unshared Nobel Prize in the sciences.

The Maize Genetics Executive Committee awards the Barbara McClintock Prize for Plant Genetics and Genome Studies in memory of McClintock’s many contributions. The prize is given annually to one of the most creative minds and productive scientists in the study of plant genome structure, function and evolution, including the analysis of gene regulation and epigenetics. More information on the McClintock Prize and the MGEC can be found at http://mcclintockprize.maizegdb.org/.

It is the mission of the Maize Genetics Executive Committee to identify both the needs and the opportunities for maize genetics and to communicate this information to the broadest possible life science community. This community includes scientists, funding sources for scientists and the end users for the accomplishments of maize genetics, from farmers to consumers.