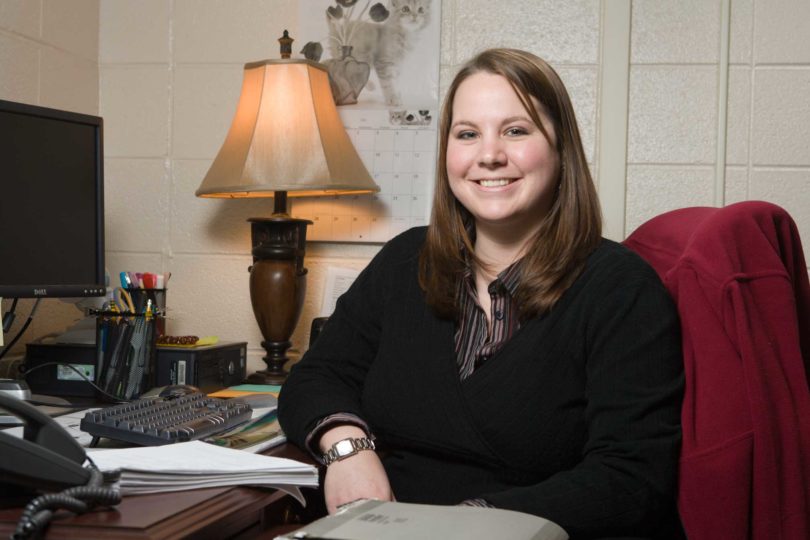 By the time the holiday shopping season rolled around, Jessica Hawks, project manager in the Office of the Vice President for Research, wasn’t worried about money—or job security. In a whirlwind series of events, Hawks had learned of, been nominated for and won the first What A Great Idea! Award and its grand prize: $750.
“It certainly helped around Christmas time,” she said. “Everybody got a little nicer present.”

The WAGI Award is the brainchild of David Lee, vice president for research. He said it’s a way to show appreciation for the efforts of employees in OVPR. The award honors any idea or program throughout the calendar year that supports the mission of the office or contributes to its effectiveness.

“I have been consistently impressed by the quality and impact of the effort that folks in my division routinely put forth, yet equally frustrated by our seeming inability to recognize and reward these efforts in the traditional ways,” Lee said. “The OVPR staff has frequently—and usually with little or no fanfare—found excellent ways to improve our services to the research communities, and we wanted to find a way to say thank you. The WAGI program is both a fun and a meaningful way to do that.”

Lee sent out an e-mail announcing the award in November, and within weeks, Hawks claimed the top prize, using the money (minus taxes ) to ease the holiday money crunch and treat herself to a visit at her favorite hair salon.

Her idea was to move some of the office’s internal programs toward a paperless, online process. The result streamlined workflow, saved time and resources, and simplified document tracking.

Response times that typically required more than a month in some cases suddenly took two weeks.

“It was easy for someone in my position to see where we could save time,” she said. “As the middle person, you get to see both sides—the nitty gritty—and see how things could be changed to ease the whole process.”

The programs she’s worked with so far—foreign travel, internal awards and commitment tracking—have become stepping stones in a larger process, she said. Along with Robert Scott, associate vice president for research, she hopes to move many more of the office’s programs toward an easy-to-use online approach.

“The reason I thought (Hawks’ idea) was one of the best candidates was that it had such a significant impact on time savings, and because of that on people’s time and efficiency,” Scott said. “It impacted so many different units within OVPR.”

Senior staff within OVPR judged the awards. They were not eligible to win. In addition to Hawks, the staff also recognized Gary Rachel as the first runner-up and Helen Fosgate, Chris Ross and LaRie Sylte and Kim Fowler as honorable mentions. They were all compensated for their contributions.

“We plan to do this annually,” said Scott. “The justification is for saving money, saving time or streamlining operations to make people’s lives easier, not necessarily only internally, but also involving interaction with our client base—all the faculty.”

After typing up a letter of recommendation and a description of how the work benefited the office, Hawks turned in her nomination the easiest way she knew how—electronically.