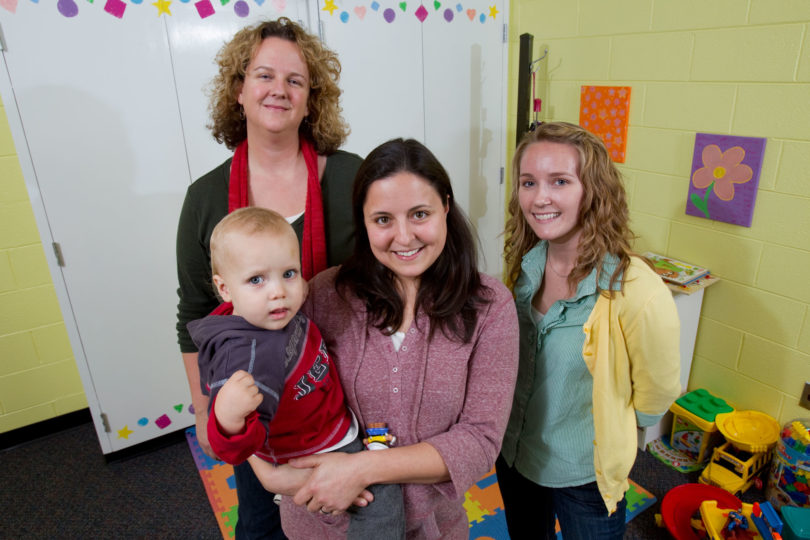 Cortisol may be the Swiss Army knife of hormones in the human body—just when scientists think they understand what it does, another function pops up. While many of these functions are understood for adults, much less is known about how cortisol operates in babies and toddlers, especially when it comes to an important phenomenon called the cortisol awakening response or CAR.

For the first time, psychology researchers from the Franklin College of Arts and Sciences have shown that this response for infants is opposite of what it is for adults. The new information could have implications for how infants handle stress and why proper care from their mothers could affect how growing children react to cortisol in later life.

“Surprisingly, the CAR hasn’t been widely studied in infants or young children,” said psychology doctoral student Melissa Bright, who led the study. “There is consensus that the adult pattern of cortisol response isn’t present at birth, but much less is known about when in the first year of life it is established.”

Other authors of the research, published online in the journal Developmental Psychobiology, are Janet Frick, a faculty member in the psychology department and director of the UGA Infant Research Lab, and Douglas Granger of Johns Hopkins School of Nursing.

Cortisol is produced in the adrenal gland and has dozens of jobs in the body. It is released in response to stress and can increase blood sugar, suppress the immune system and aid in metabolism. And yet it works in more arenas than those. One such area is the CAR, and when adults awake, an organ “team” called the hypothalamic-pituitary-adrenal axis works together to release cortisol—somewhat as a sentinel—alerting the body to stress or threats.

The new study discovered that in infants, cortisol levels actually didn’t increase but stayed stable from the time they awoke in the morning and for half an hour afterward. Cortisol levels didn’t change following naps, either. Interestingly, the research team also found a mother-infant cortisol association called “psychological attunement,” confirming recent research that cortisol levels between mothers and infants are correlated.

“Taken together, these findings raise an interesting possibility,” said Frick. “In infancy, cortisol responses may be less dependent on hard-wired biological rhythms and more influenced by the HPA axis activity of the baby’s immediate caregivers.”

The team conducted the research using 32 baby-mother pairs. Nineteen of the babies were female and 13 were males, and they ranged in age from 7.8 to 17.4 months. After agreeing to participate, mothers were instructed to collect saliva samples using cotton swabs from inside the mouths of their infants and then themselves four times on a single day: when the infants awoke in the morning, 30-45 minutes after the baby awoke, when the baby awoke from its first nap of the day and 30-45 minutes after that. Other requirements applied, but they weren’t difficult for the mothers to follow, said Bright.

No one knows at precisely what age the CAR begins in humans, though it had previously been predicted to be present sometime in the first year. The current data indicates that it emerges at a much older age, however. Why babies don’t emit rising amounts of cortisol in response to awakening isn’t clear, either.

“It is possible that the CAR is absent or more difficult to detect in early childhood because of the developmental stage of the hippocampus and related structures,” said Bright.

The issue of psychological attunement also has possibly important implications for a close, caring relationship between mother and child. Other researchers have studied so-called “behavioral synchrony,” a parent’s ability to identify and appropriately respond to her or his child’s emotions and behaviors. The psychological attunement suggested in the present study may be part of the same paradigm, according to Frick.

Bright said that while there are some experimental-design limitations in the study, this first study of the cortisol awakening response in infants could lead to other research that clarifies why the response in babies is so different from that in adults.