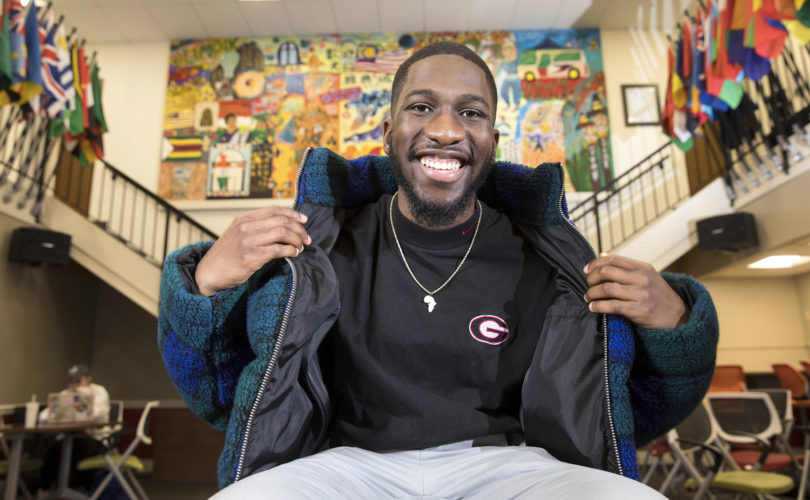 Wilkray Biboum describes himself as a student of a “million and one interests—completely different interests. My biggest struggle in college has been—what is my purpose,” he said. Biboum is very interested in African culture, fashion, business, music and health care. And through the hundreds of student organizations at UGA, he’s able to sing at talent shows and volunteer in the community. (Photo by Dorothy Kozlowski/UGA)

Tour guide gets involved on campus, finds passion for university

This story is part of UGA’s student story series that highlights unique students across campus. This story was written and photographs taken before the suspension of in-class instruction and was originally published on April 16, 2020)

He thought he’d go to dental school. He thought his dream college would have palm trees and white sandy beaches nearby.

But instead he’s at a university he had to be talked into applying to. He’s cooking in his classes and modeling suits in fashion shows. He dances at talent shows. He was named Outstanding Family and Consumer Sciences student, Outstanding Campus Leader by the Black Male Leadership Society, and was named the University of Georgia’s Homecoming King in 2019.

“Bloom where you’re planted,” is how he describes his success.

And his story of how he found his place at UGA and began to thrive is his favorite part of giving tours at UGA’s Visitors Center.

Biboum, a senior from Norcross, was miserable his first semester. “I had this idea that I was going to transfer. I kept people at arm’s length so that by the time I transferred, I wouldn’t have any close connections to the school.”

His mother told him that he’d be at UGA for at least a semester or a year. “Make sweet lemonade out of sour lemons,” she told him.

He decided to make the best of his time at UGA. He already had a job in housing as a desk assistant at Brumby Hall, but he started getting involved and pouring himself into people and organizations. He filled his time with Freshman Forum and Freshman Programs, the Student Alumni Council, the Black Male Leadership Society and the African Student Union.

And gradually, he went from having one foot out of the door to leading tours of the university, telling prospective students how much he loves this campus and wants them to find a place that makes them feel the same way.

There was no one eureka moment, but rather over the course of the semester, he got the feeling that UGA was where he was supposed to be.

It’s what he tells prospective students.

“You can go on a tour, and they can show you the school, show you the perks, show the programs, tell you everything you can gain from it, but the real beauty of whatever school you go to is the way the school makes you feel and tugs on your heart strings,” he said.

That’s what he was really after—a feeling.

Similarly, that’s how he found his major. He came to UGA intending to go to into dentistry. “I had four cavities when I was 10 and had them all removed,” he said. “I started being super into cleaning my teeth.”

But after a day of interning at Mercy Health Center, he knew it wasn’t for him.

And that’s when he found the College of Family and Consumer Sciences, what he calls “the happiest place on campus.”

After “the greatest advising appointment of his life,” Biboum changed his major to nutritional sciences and hasn’t looked back.

He’s also putting himself through school—with jobs at the Visitors Center and as a student assistant at Hill Hall. For a time, he also worked at CVS, juggling three jobs. 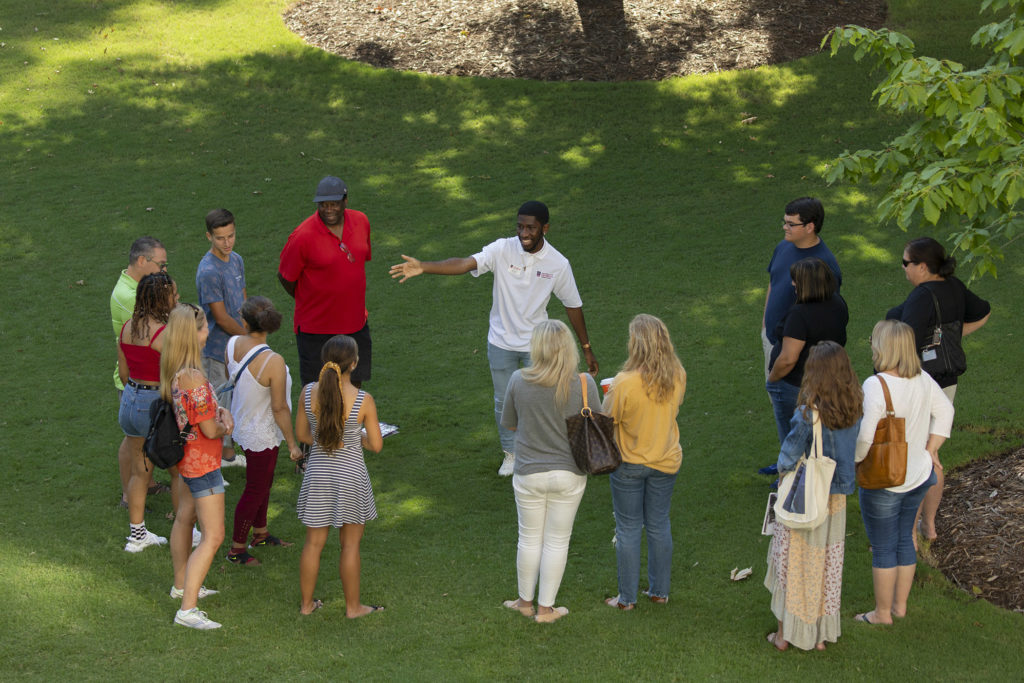 When Biboum started at the Visitors Center, the director asked if he wanted Will or Wilkray on his name tag. It took Biboum two days to decide. He asked his mom, friends and his girlfriend. They all told him to be himself and “go by your name.”

It’s not an old family name—it’s the name his older brother picked out for him, based on a sound he conceptualized in the busy hospital room shortly after his baby brother’s birth. His mother liked it and tried to find a spelling, but the name didn’t exist.

“It took me a long time to like my name. I used to go by every shade of Will,” he said. But after thinking about it, he decided to go with Wilkray on his UGA nametag. And now it’s something he’s proud of.

He even has a rhyme for his name. “Where there’s a wil, there’s a kray.’ Combine it, and you get Wilkray.” 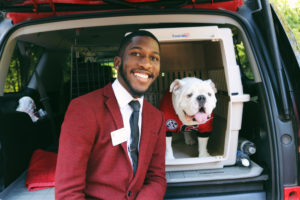 He was born in Cameroon, a country in central Africa. He moved to France and then moved to the U.S. when he was in fifth grade. A first-generation college student, it’s yet another reason why he tries to make the most of his time on campus.

“Everything I do, I do for my parents,” he said. “I’m able to repay them in the tiniest amounts for everything they’ve done for me.”

While being named Homecoming King last fall was a huge accomplishment for him, Biboum was more happy for his mother, whom he FaceTimes once a day. She was in a skybox, taking pictures and experiencing a massive SEC football game for the first time. “She was having the time of her life.” 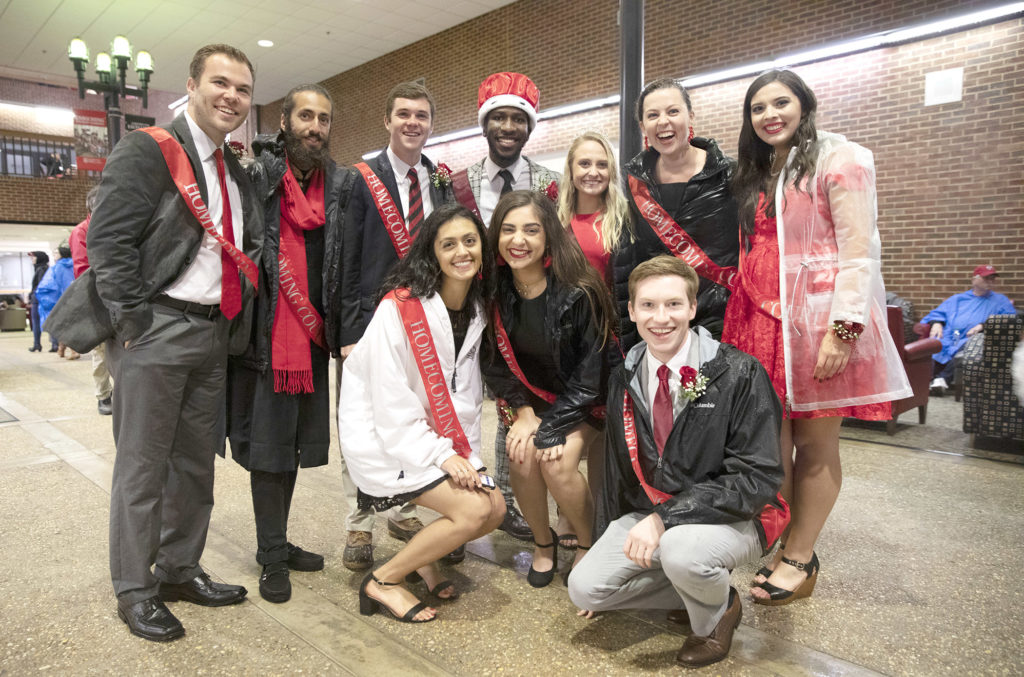 After graduating this May, Bibuom is thinking about graduate school—in particular the STEM MBA offered through the Terry College of Business.

Thinking back on his time at UGA, his favorite memories are of hugs from Miss Sandra and Miss Trudy, and his go-to Wednesday order of sweet potatoes, mashed potatoes and gravy, and fried chicken at Snelling Dining Commons.

“They already know what I’m going to order because I’m there all the time,” he said. “Snelling is going to be what I miss the most.”