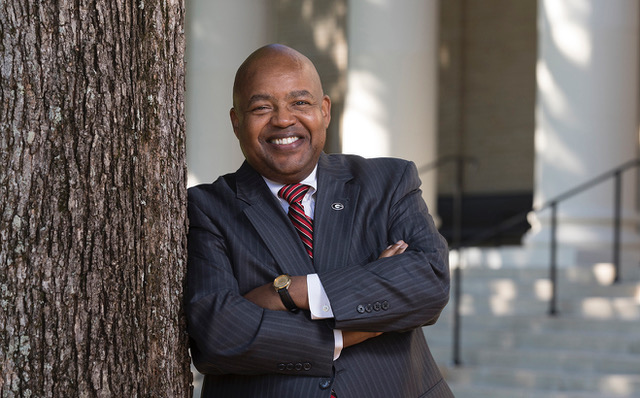 In his nearly four decades of experience in higher education administration and student affairs, Wilson has served as a strong advocate for students and student development, particularly the inclusion and success of students from historically underrepresented groups.

“Vice President Wilson is an outstanding leader and an exemplary alumnus, and he cares tremendously about our students and their success,” said UGA President Jere W. Morehead. “I can think of no better person to inspire our graduates during these challenging and uncertain times, and I am looking forward to hearing his message.”

From 2004 to 2013, he served as executive vice president for student affairs at the College of Charleston, where he established a new student leadership center; improved health, safety and residential facilities and services; and successfully advocated for enhanced diversity education.

He also has held student affairs leadership positions at Agnes Scott College and Northern Arizona University. Wilson began his career at UGA in 1983 as director of orientation and assistant director of admissions.

Wilson has authored numerous scholarly articles and has given presentations on issues of race, ethics, crisis management and staff development in higher education. He holds a bachelor’s degree in social work and a master’s degree in education, both from UGA.

Wilson has held leadership roles in several national organizations, including the National Orientation Directors Association (NODA) and the American College Personnel Association. He has served as a faculty member for the NODA Orientation Professionals Institute, as well as for the Southern Association for College Student Affairs/National Association of Student Personnel Administrators Region III New Professionals Institute. Wilson also serves on the national board of directors for Sigma Phi Epsilon Fraternity.  Locally, he serves on the board of directors for the St. Mary’s Health Care System.

Wilson’s service and leadership activities in the community have been recognized with honors including the President’s Award for Outstanding Service and Contributions to the National Orientation Directors Association, the Outstanding Master’s Graduate Award from UGA’s Student Affairs Administration Program and the recipient of the UGA Blue Key Service Award.

Jack Bush, a 2020 mechanical engineering graduate from Savannah who now works at Lockheed Martin Corporation, will be the student Commencement speaker. He will speak on hard work, growth and excelling inside and outside the classroom.