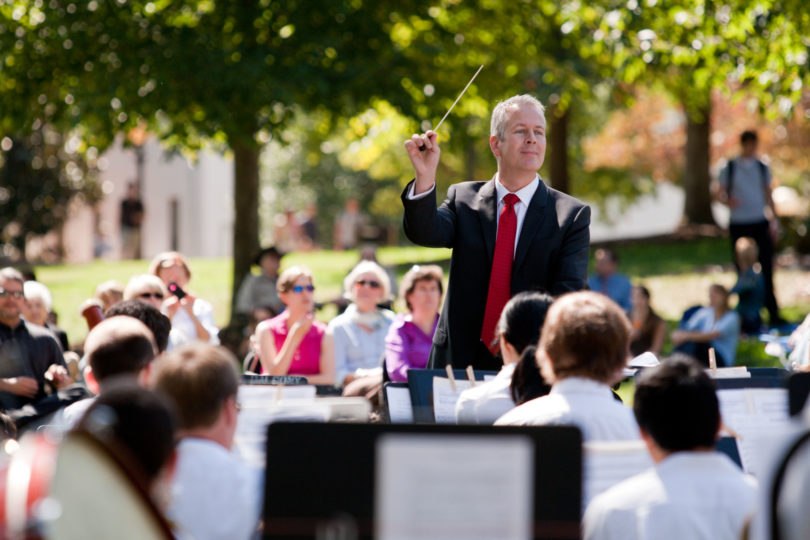 UGA's Wind Ensemble will play a free afternoon concert in front of Old College on Sept. 28. The concert features patriotic marches and an audience sing-along.

The Wind Ensemble will give its annual free Concert on the Lawn Sept. 28 at 12:30 p.m. on the lawn in front of Old College.

The event harkens back to the turn-of-the-century tradition of afternoon band performances in the park and will include patriotic selections including John Phillip Sousa marches. The Wind Ensemble, which has approximately 60 members, will perform Summon the Heroes, written by film composer John Williams for the 1996 Atlanta Olympics; a sing-along of America the Beautiful; and Rossini’s William Tell Overture, famous for its use on the Lone Ranger radio and television programs.

One highlight of the performance will be Charles Ives’ Variations On America. Ives, the son of a U.S. Army bandleader, grew up hearing the park performances the Concert On the Lawn is based upon, and frequently incorporated into his compositions.

“The tradition started in the late 1800s, and these bands would pack literally thousands of people into parks in the summer,” said John Lynch, professor at the Hugh Hodgson School of Music and director of the Wind Ensemble. “The level of playing in these groups was of such a high level, and because of that this pastime took hold and flourished in the U.S. before television and radio rose to popularity.”

In its third year, the Concert on the Lawn is the brainchild of Lynch and George Foreman, director of the Performing Arts Center.

“George’s main research interest is early band literature and instruments,” said Lynch. “He has an enormous library of scores and horns, and it’s something about which he is really passionate.”

The passion of Foreman and Lynch has helped bring the Concert on the Lawn to campus.

“It’s such a wonderful way to engage the community,” Lynch said. “I love seeing so many people from so many walks of life—students, faculty, people from the town, those who just happen by—enjoying live music together on a crisp day in the fall.”