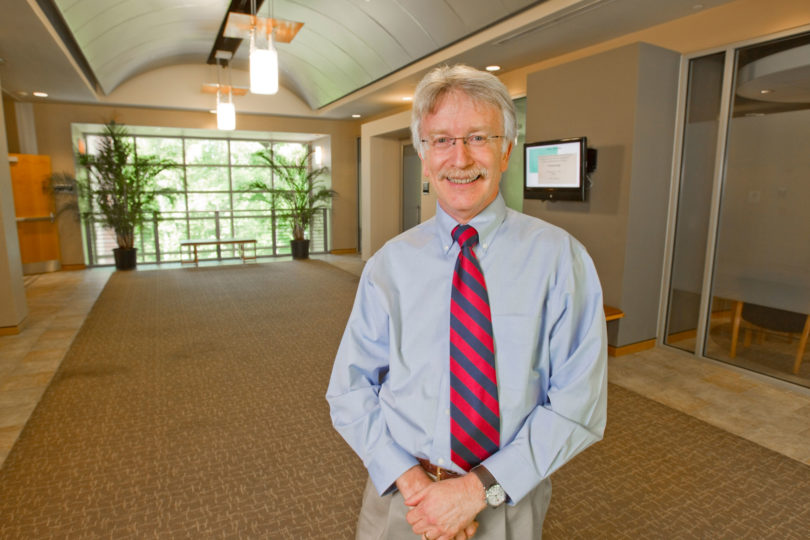 From his office in the Complex Carbohydrate Research Center off Riverbend Road, Alan Darvill has a front-row seat to an annual rite of spring: Turtles crawl out of the river, lay their eggs along the sandy bank and then drag themselves back to the safety of the water.

Darvill revels not only in the beauty of his wooded setting, but also in the overwhelming success of the CCRC-grants totaling more than $180 million over 25 years-and, more importantly, he said, in “the assembly of a top-flight faculty, who serve as a model for successful collaboration.”

Since it was established in 1986, the CCRC has grown into the largest center for carbohydrate research in the world. But what goes on at the Complex Carbohydrate Research Center, and why do scientists who study carbohydrates need their own ­building?

“Studying carbohydrates is difficult because of their complex chemical structures,” said Darvill, in his lilting British accent. “It requires specialized methods, equipment and labs. We study the role of carbohydrates in biology-in our bodies, in plants and animals, and also in microbes, including fungi, bacteria and viruses.”

Unlike proteins and nucleic acids, carbohydrates are branched and orders of magnitude more complex than other polymers. Darvill has been fascinated with carbohydrates since graduate school, where he studied the role of plant cell walls in controlling plant growth.

After earning a bachelor’s degree in biology at the University of Wolverhampton-and a Ph.D. in plant physiology from Abersystwyth University, United Kingdom, Darvill came to the U.S. via the University of Colorado, where he met Peter Albersheim, professor of biochemistry and molecular biology.

Darvill said it was there that the idea to gather a nucleus of scientists to study carbohydrates was discussed extensively. After shopping their idea around to various universities, they ultimately came to UGA because it offered the best opportunity for collaboration across academic and departmental lines.

In 1986, they became co-directors of UGA’s Complex Carbohydrate Research Center, the country’s first center dedicated solely to the study of carbohydrates.

Darvill grew up in Redditch, a small town in northeast Worcestershire, England. He met his wife of 36 years, Jan, “over the test tubes” at Abersystwyth University, where she was studying biology.

As the CCRC marks its 25th anniversary at UGA this year, Darvill marvels at the success of its programs and people. Today CCRC scientists work across four broad interdisciplinary programs to determine the role of carbohydrates in growth and development, host-pathogen interactions and diseases processes.

One research program focuses on carbohydrates in biomedicine. Scientists study the roles of glycoproteins and proteoglycans in animal growth and development, disease and cancer. Researchers in the plant sciences program study plant and cell structures, and the biosynthesis and biological functions of primary cell walls.