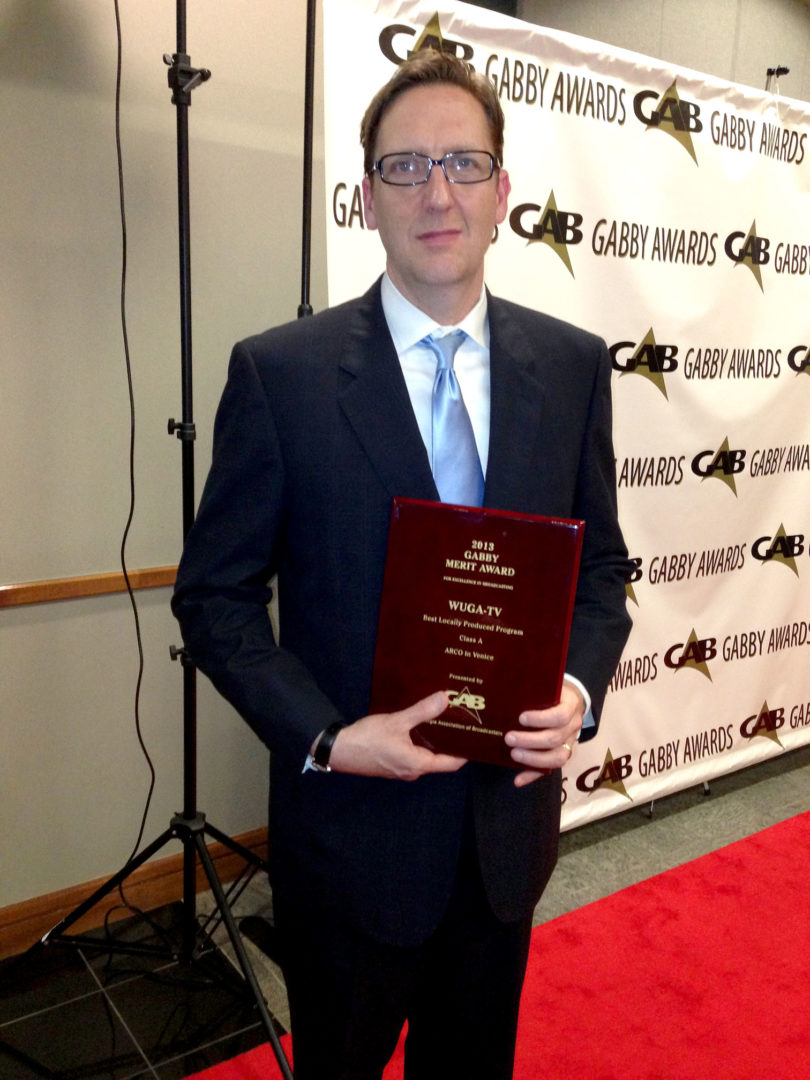 Athens, Ga. – WUGA-FM and WUGA-TV, the radio and television stations at the University of Georgia, won statewide awards for excellence in broadcasting at the Georgia Association of Broadcasters Honors Night held June 7 in Atlanta.

“High Shoals Drifter,” an audio essay that airs weekly on WUGA-FM, received the award for Best Short Form Feature. The program is produced and broadcast through a partnership between community member Eddie dePeterse and WUGA radio. The vignettes, which cover a variety of local subjects—from humorous to sentimental—are written by dePeterse and are voiced by Doug Hatch. WUGA’s program was awarded the Gabby in the category of radio markets of 50,000 or more listeners—including Atlanta.

WUGA-TV received the merit award for the documentary “ARCO in Venice.” The documentary chronicles UGA’s ARCO Chamber Orchestra in its journey to perform a UNESCO-sponsored concert at the La Fenice Opera House in Venice, Italy. The concert was performed under the direction of Levon Ambartsumian, Franklin Professor of violin in the Hugh Hodgson School of Music. “ARCO in Venice” was produced and directed by Alan Flurry of the Franklin College of Arts and Sciences.

“We are delighted that these talented contributors to our stations have received much-deserved recognition for their excellent work,” said Jimmy Sanders, director of TV and radio at UGA.

Also, Chris Shupe from WUGA-FM and Alexia Ridley with WUGA-TV and radio served as on-stage award presenters during the event.

WUGA-TV and WUGA-FM are operated by the University of Georgia through a partnership with Georgia Public Broadcasting. Funding is provided in part through sponsorships, underwriting and listener contributions. For more information, see www.wugatv.org and www.wuga.org.