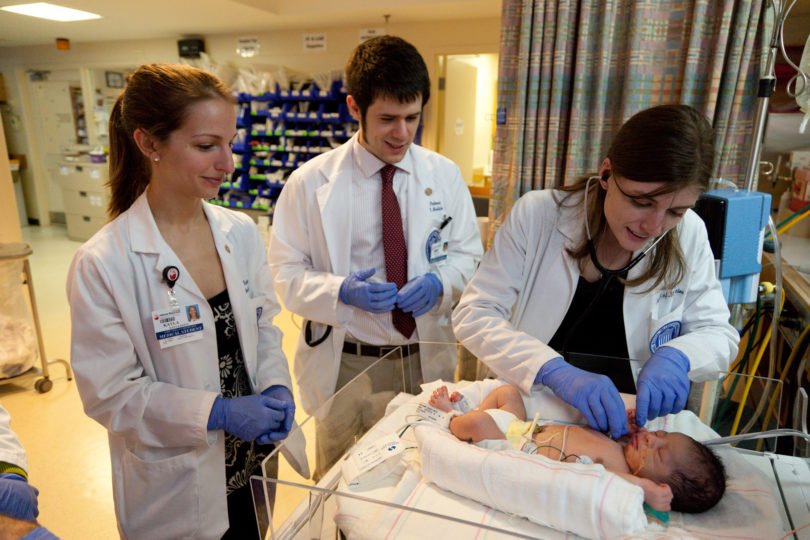 Athens, Ga. – A new documentary by University of Georgia graduate students following the first class of medical students to study in Athens through the partnership between Georgia Regents University and UGA will premiere on WUGA-TV Aug. 21 at 7 p.m.

The 30-minute documentary-“Changes and Transitions: Georgia’s New Medical Partnership,” compiled by a team of health and medical journalism students from the Grady College of Journalism and Mass Communication, is a peek behind the scenes into the lives of the medical students and their interactions with the Athens community.

This anthology of short films produced during the past year documents the students’ lives as they struggle to maintain their own health in the high-pressure environment of medical education. Through their experiences, viewers learn about the students, the community they work in and the local doctors and patients with whom they work.

The documentary will look at the latest stages in the medical partnership’s evolution-including how local community hospitals are being transformed into teaching institutions. It also explores relationships between UGA’s new Health Sciences Campus and the historic Normaltown neighborhood that surrounds it. Neighbors and local doctors are featured prominently in the stories.

Since the medical partnership’s launch in August 2010, three teams of Grady College reporters have produced more than 60 multimedia stories on the medical students, the Medical Partnership faculty and the research community at UGA as well as the health ecosystem in the Athens area. This work is done during fall semester as part of the Advanced Health and Medical Journalism, or JRMC 7356, course. Many of the students also worked on the project through the spring semester as part of an independent study program.

In the spring of 2012, WUGA-TV invited the independent study team to combine existing short documentaries into two 30-minute pieces, which were broadcast last year.

In 2013, a team of three health and medical journalism students created a new half-hour program for WUGA-TV with guidance from producer Melissa Jackson. Grady College graduates Lacey Avery, who was awarded a communication fellowship at the Centers for Disease Control and Prevention; Dian Cai, now working as an assistant producer for SINOVision in New York; and Jessica Luton, now a communications specialist in the UGA Franklin College of Arts and Sciences, produced and edited the show, which draws on multimedia packages produced by them and by classmates Carolyn Amanda Dickey, Jing Luo and Jason Azurmendi.

The journalism students are overseen by Patricia Thomas, a journalism professor in the Grady College. Thomas holds the Knight Chair in Health and Medical Journalism, and earnings on the endowment made it possible for her students to create video documentaries about the new medical partnership and its impact on the community.

UGA Grady College
Established in 1915, the UGA Grady College of Journalism and Mass Communication offers undergraduate majors in journalism, advertising, public relations, digital and broadcast journalism and mass media arts. The college offers two graduate degrees and is home to the Knight Chair in Health and Medical Journalism and the Peabody Awards, internationally recognized as one of the most prestigious prizes for excellence in electronic media. For more information, see http://www.grady.uga.edu or follow @UGAGrady on Twitter.

WUGA-TV and WUGA-FM
WUGA-TV and WUGA-FM are operated by UGA through a partnership with Georgia Public Broadcasting. Funding is provided in part through sponsorships, underwriting and listener contributions. For more information, see www.wugatv.org and www.wuga.org.