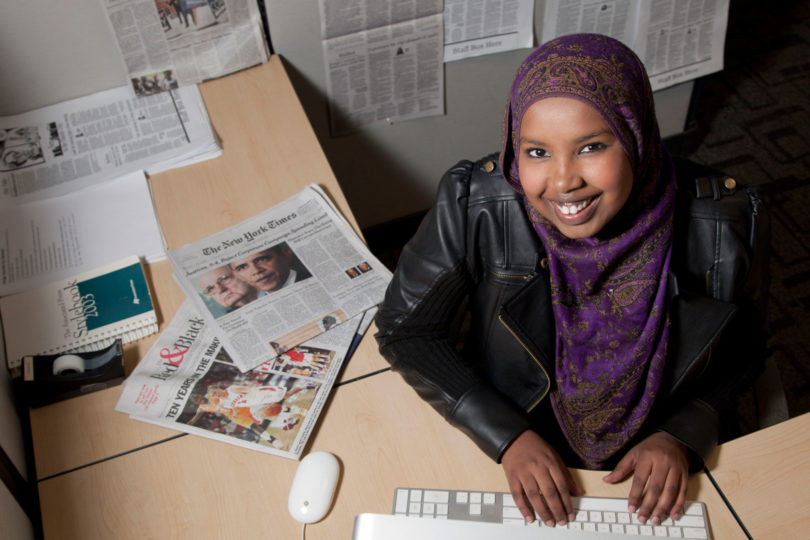 Yasmin Yonis, who is graduating in May, has been named a 2011 Merage American Dream Fellow. She is the sixth consecutive student in the Honors Program to receive this award since 2006.

Yonis, who is pursuing bachelor’s degrees in international affairs and journalism, is one of 10 national winners of the fellowship, which provides up to $20,000 over a two-year period to academically outstanding undergraduates who are immigrants to the U.S. She also earned a 2010 Truman Scholarship.

Born in Somalia, Yonis and her family came to the U.S. when she was 3 years old as refugees from the civil war.

“I grew up in Lawrenceville aware of the privileges of my American childhood compared to those my family had left behind in Somalia,” she said.

“The Merage Fellowship speaks to the best of the American spirit,” said UGA President Michael F. Adams. “Yasmin and her family fled the turmoil in Somalia to seek the opportunity promised in America, and she has made the most of that opportunity. Her determination to serve others in the throes of human rights crises is inspiring, and I look forward to following her career.”

The Merage Foundation for the American Dream administers the scholarship program that was created by Paul and Lilly Merage so that recipients can follow their individual American dreams and become leaders in their chosen careers. UGA is one of 22 partner universities-among them Columbia, MIT, Harvard and NYU-that can nominate up to three candidates per year.

“Yasmin is one of those rare students who not only impresses me, but also inspires me,” said David S. Williams, associate provost and director of UGA’s Honors Program.” She would be the first to say that living in the United States gave her the experiences and the resources to enable her to be an agent for positive change in the world, so to receive an award in recognition of her ‘American Dream’ is very appropriate and meaningful.”

With her personal history as the driving force, Yonis has taken advantage of all opportunities at UGA to prepare for a career in human and civil rights law as well as public policy working with marginalized communities in the U.S. and abroad.

While at UGA, Yonis served as opinions editor of The Red & Black student newspaper and wrote columns and institutional editorials. She gained international reporting experience as an intern for Voice for America through UGA’s Honors in Washington Program in summer 2009. At the multimedia international public broadcasting agency, Yonis worked in the division focused on African events and affairs.

Yonis recently returned from a trip to Ethiopia’s semi-autonomous Somali region where she worked as an intern with Mercy Corps, an international aid organization focused on disaster response, sustainable economic development, health services, and emergency and natural disaster relief.

With additional interests in public policy, Yonis has completed research addressing African women’s empowerment through UGA’s Roosevelt Institution Scholars Program and as one of the inaugural participants in UGA’s Carl Vinson Institute of Government Fellows Program. She participated as one of only 10 law fellows in the University of California’s 2010 Public Policy and International Affairs Junior Summer Institute.

Yonis also has served in leadership roles in the community as the political action chair of the Black Affairs Council at UGA and as a tutor for students of color. She established a mentoring program for African-American girls at an Athens middle school and mentors Somali-American high school students in Atlanta.