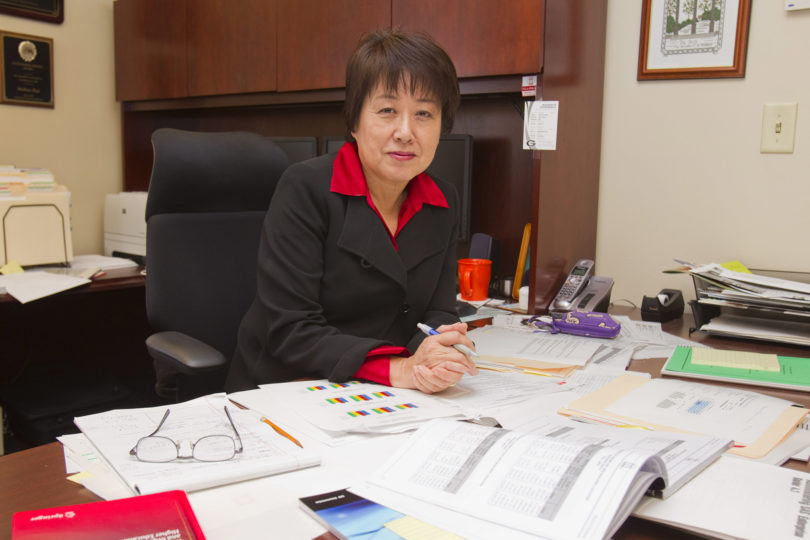 In the same way that people depend on UGA for an educated workforce, innovative research and service that empowers communities, campus decision-makers rely on the Office of Institutional Research, led by Meihua Zhai, for objective data that helps them make informed decisions for the benefit of the university, its students and, ultimately, the state.

“Discovering patterns in seemingly random numbers and then seeing your work get used in decision-making is very rewarding,” said Zhai, who joined the OIR as its director in November 2012. “It’s been a wonderful year; I love it.”

With increasing calls for accountability and resources constrained by economic challenges, the work Zhai and her team do is more important than ever. Zhai earned her doctorate in educational research and measurement from Ohio University in Athens, Ohio. She has applied her talent for using data to drive improvement in higher education in a variety of settings, including public universities, national education advocacy organizations in Washington, D.C., and the University System of Georgia. But she said the most exciting place for her to be is on a college campus, where life-changing activities occur every day.

One of her top priorities as OIR director has been to reduce the number of clicks between data and the people who need it. On the redesigned OIR website (http://oir.uga.edu/), users easily can obtain current and historical information on enrollment, course offerings, faculty and facilities-often down to the departmental or program level. Users also can submit requests for additional information through an online form. In 2013 alone, OIR analysts responded to nearly 300 ad hoc data requests.

A major area of focus for Zhai and her team has been supporting the Complete College Georgia initiative, a statewide project coordinated by the USG to increase access to college as well as retention and graduation rates. At the request of members of the Retention, Progression and Graduation Committee, for example, her team developed a method to track student retention over time at the school or college level. Her team also is working with the Office of Student Financial Aid and the Office of Undergraduate Admissions to track the impact of university initiatives on student success.

Zhai uses data to illuminate how seemingly personal decisions made by individuals affect the university in aggregate. Take, for instance, so-called “last-minute leavers.” These are students who leave the university as seniors, a mere 30 credit hours or so from graduation. Why would they leave at a point when they-and often their families-have invested so much in their education? Research by OIR analyst Ning Wang revealed that nearly a third of these students are doing well academically, with GPAs above 3.0. Of these high-achievers, more than half go on to earn degrees at other institutions, often to pursue degrees that aren’t available at UGA, such as nursing.

At the other end of the spectrum, 17 percent of last-minute leavers have GPAs below 2.0. This group is a prime target for intervention, Zhai said, since advisers could be on the lookout for students who are struggling in their major and suggest academic support such as tutoring or possibly changing to a major more suited to their strengths.

Turning students who otherwise would have been last-minute leavers into graduates could increase graduation rates by 2 percent, Zhai said. That’s a significant boost to a university with a graduation rate that is already the highest among USG institutions and exceeds all but two national peers.

“Our graduation rate is very high,” Zhai said, “but that doesn’t mean we don’t have room for improvement.”

Zhai said that statistics are at their most powerful when they answer questions that are rooted in real-world challenges, which is why she and her staff actively seek collaboration with faculty and administrators.

“We use data to help people identify what they do well and also where they can improve so that we can collectively do better,” Zhai said. “So if you have questions regarding how your program, department or college is doing and what the patterns are, contact OIR.”