In the decade since a tsunami washed over the Fukushima Daiichi Nuclear Power Plant in Japan, triggering the second-largest nuclear disaster in history, the surrounding towns have struggled to return to normal.

But that’s not the case for the wildlife living in the area. For the animals living in this mountainous coastal landscape, the absence of people has allowed them to expand their populations into towns formerly inhabited by people—and, in many cases, thrive in humans’ absence. 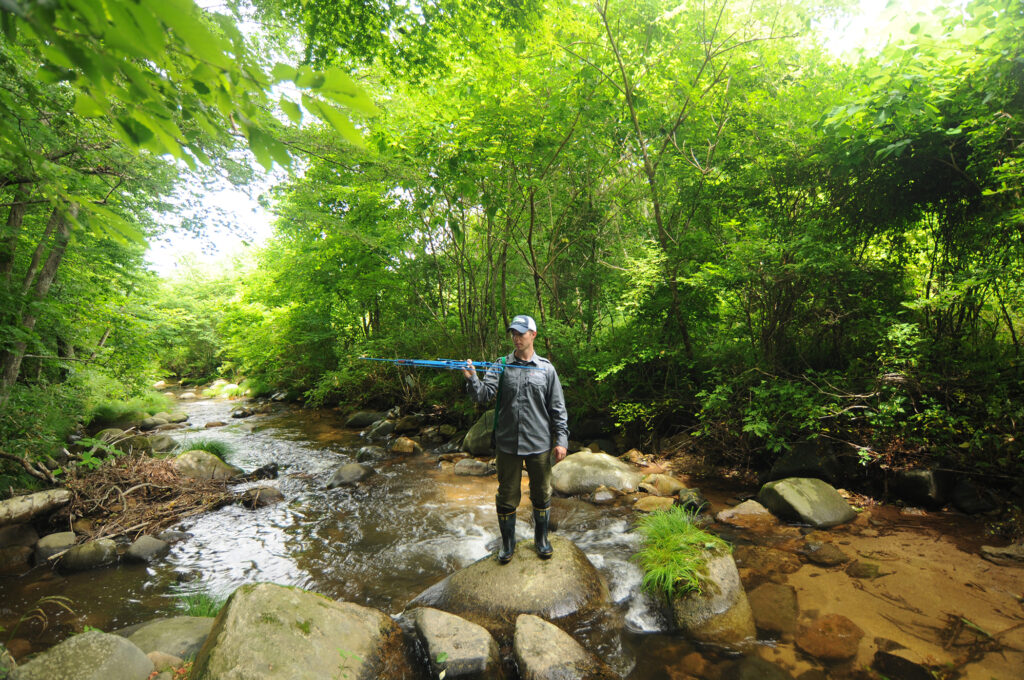 It began when an earthquake on March 11, 2011, sparked a chain reaction that ended with more than 150,000 people evacuated from their homes and thousands of acres deemed uninhabitable due to high levels of radioactive fallout. This area, called the nuclear exclusion zone, is generally off-limits to humans—although the Japanese government has been working since the disaster to remove contaminated soil and other radioactive materials.

While these remediation efforts have allowed some residents to return to the area in recent years, vast swaths of the land once inhabited by people is now home to a larger population of wild boars, monkeys and dozens of other species. 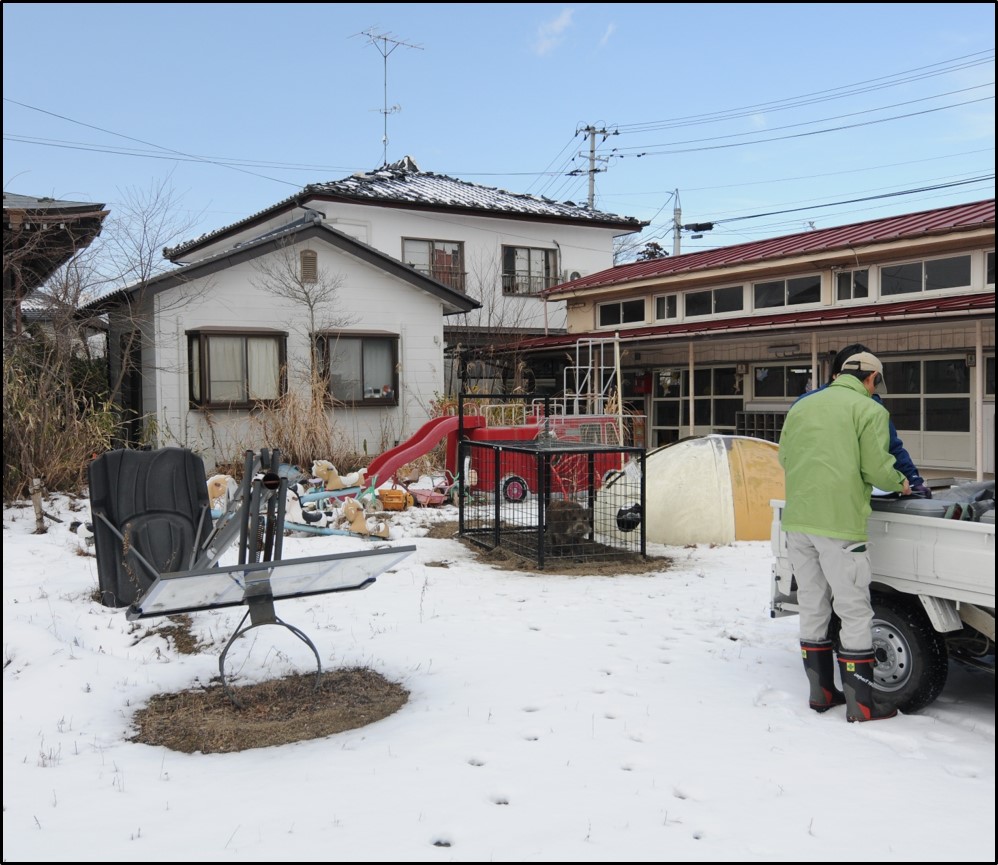 James Beasley works near a wild boar that was captured on the playground of an abandoned school in the Fukushima nuclear exclusion zone.

University of Georgia researcher James Beasley, who has been studying the effects of the nuclear disaster on the area’s wildlife since 2015, said the area’s topography once created a natural boundary between humans and wildlife. Many of the towns and rice paddies were located in the low-lying coastal areas, but as you traveled up the nearby mountains and into the dense forests beyond, the area became more rural, providing habitat and refuge for wild boar, monkeys, Japanese serow and other wildlife species.

“So, over a short distance you can travel between very different habitats that today have vastly different levels of human presence,” said Beasley, an associate professor of wildlife ecology and management at the UGA Warnell School of Forestry and Natural Resources and the Savannah River Ecology Lab near Aiken, South Carolina. 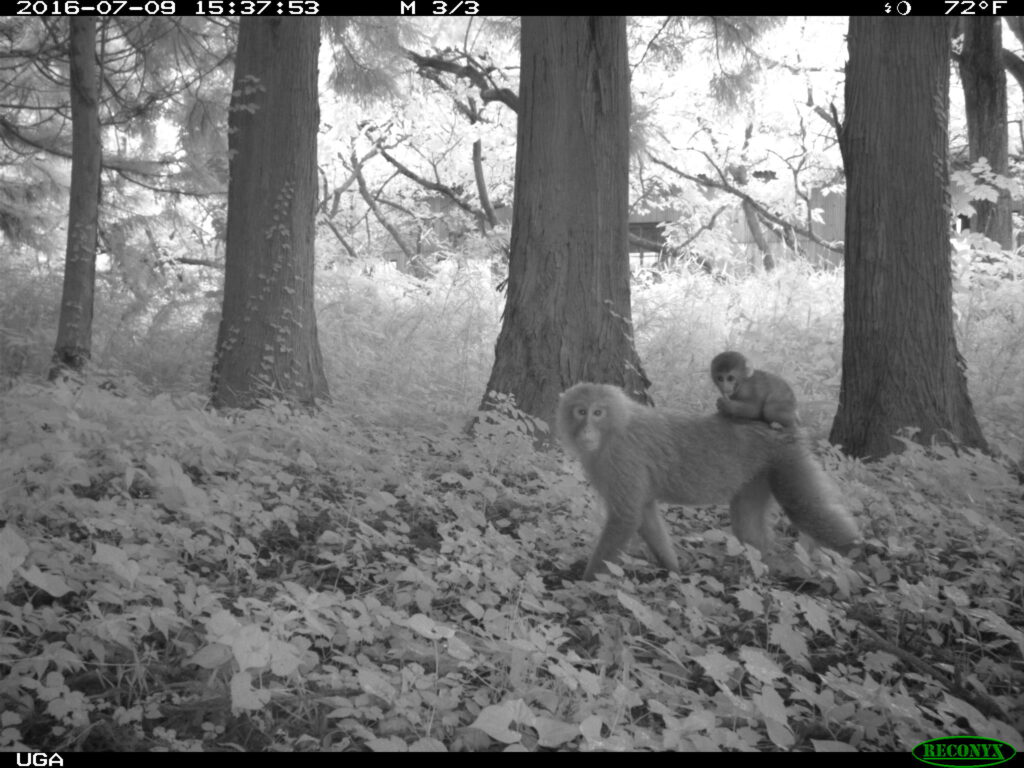 A macaque and her baby in Fukushima.

He and his research team, which has been investigating how wildlife has fared in the nuclear exclusion zone, have found these boundaries no longer hold true. “Some of the species are doing extremely well in evacuated areas, including former towns and villages” he said. “And that’s creating a major human-wildlife conflict issue, particularly in areas that have been remediated and people are beginning to repopulate.”

How have animals’ behavior patterns altered in the absence of human beings?

Today, while large portions of the exclusion zone have reopened, some residents remain reluctant to move back. As a result, many houses sit empty and open to the elements. Residents who have returned now fend off wild boar and monkeys in order to maintain a small garden. Or, some semblance of normalcy. 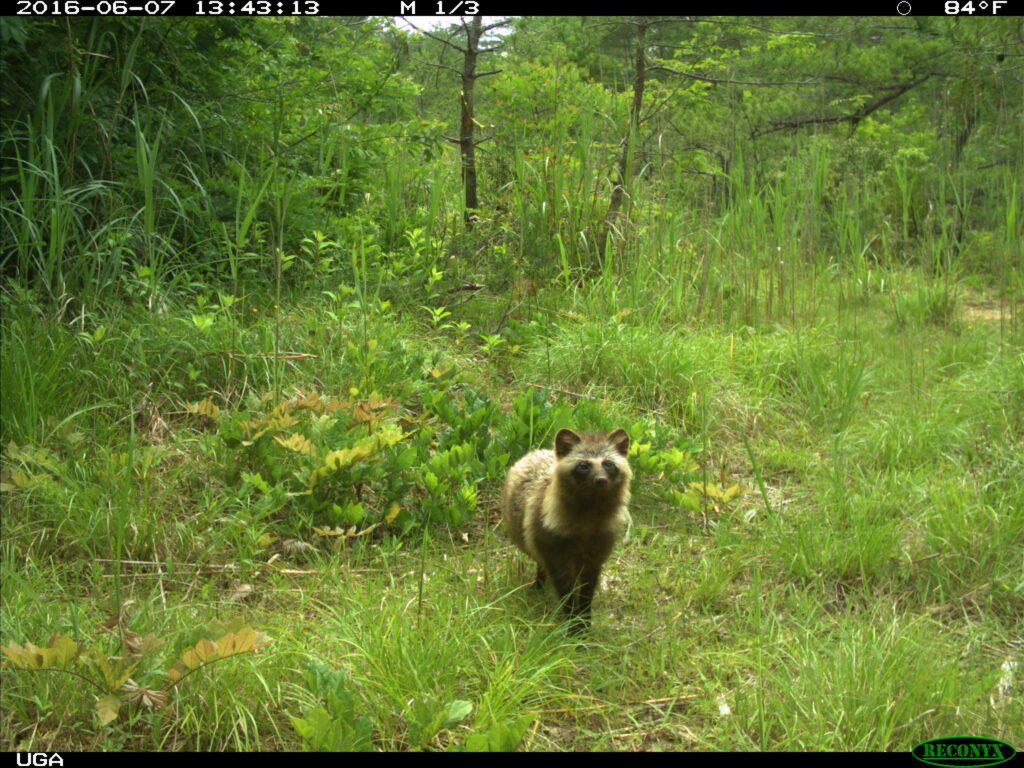 A raccoon dog in Fukushima.

“The wild boar are an issue, but so are some of the smaller non-native carnivores, like raccoons and civets. Some of our work on these species revealed they were denning in abandoned houses,” added Beasley. “And for the people who are trapping the wild boar to control their expanding populations, they are often concentrating their efforts around homes and abandoned lots, rather than in remote forests. Last time I was there, one of the wild boar was captured in an abandoned school playground.”

“So essentially populations have expanded into this newly available habitat, which is likely one of the main drivers of the increase we are seeing in populations of these species” he said. “Prior to the accident, they likely would have been hunted and driven out to minimize damages to agriculture.”

While residents monitor their gardens for invading wildlife, Beasley and his team have been monitoring the larger movement patterns of the animals, gaining a better understanding of their range, population and habits. While comparisons to before the disaster are difficult—nobody collected data on wildlife populations in anticipation of a nuclear disaster—researchers have been able to note substantial increases in some species populations, as well as changes in behaviors. For example, species like wild boar that are typically nocturnal are now routinely spotted during the day. 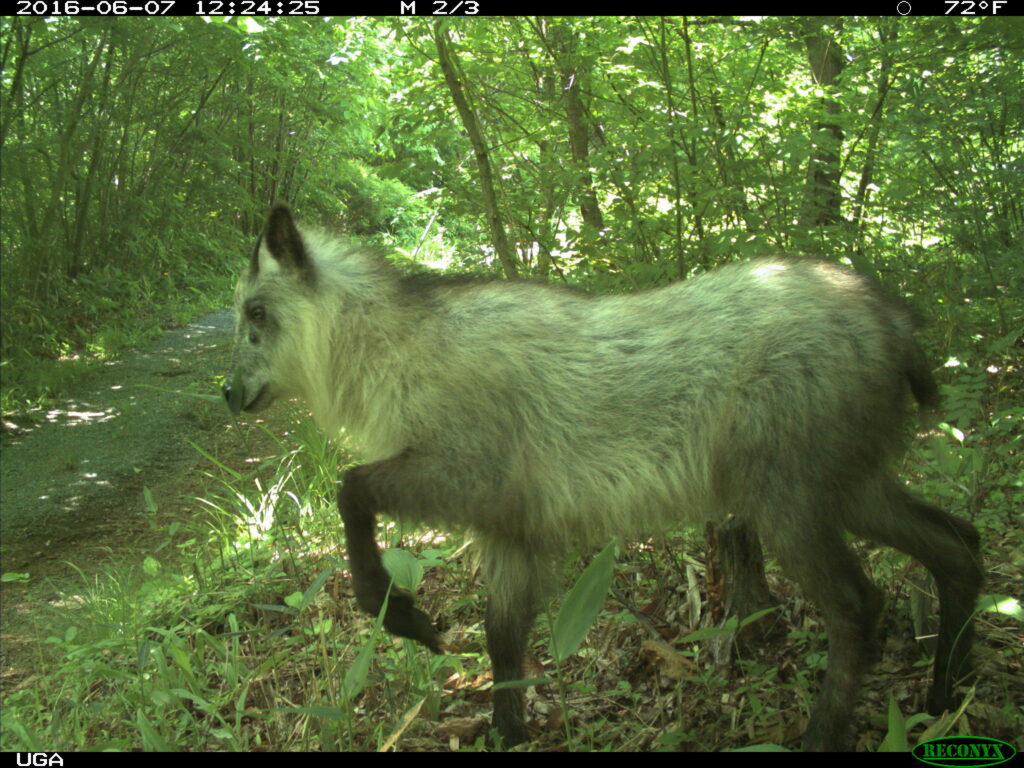 A serow in Fukushima

While there haven’t been any obvious signs that the animals have been affected by radiation, Beasley and others are now investigating potential health effects of chronic radiation exposure and have developed a new type of GPS transmitter that records radiation levels along with the animal’s movements. In particular, Tom Hinton, a professor at the Institute of Environmental Radioactivity at Fukushima has been instrumental in the development of the transmitters and attaching them to wild boar in Fukushima. 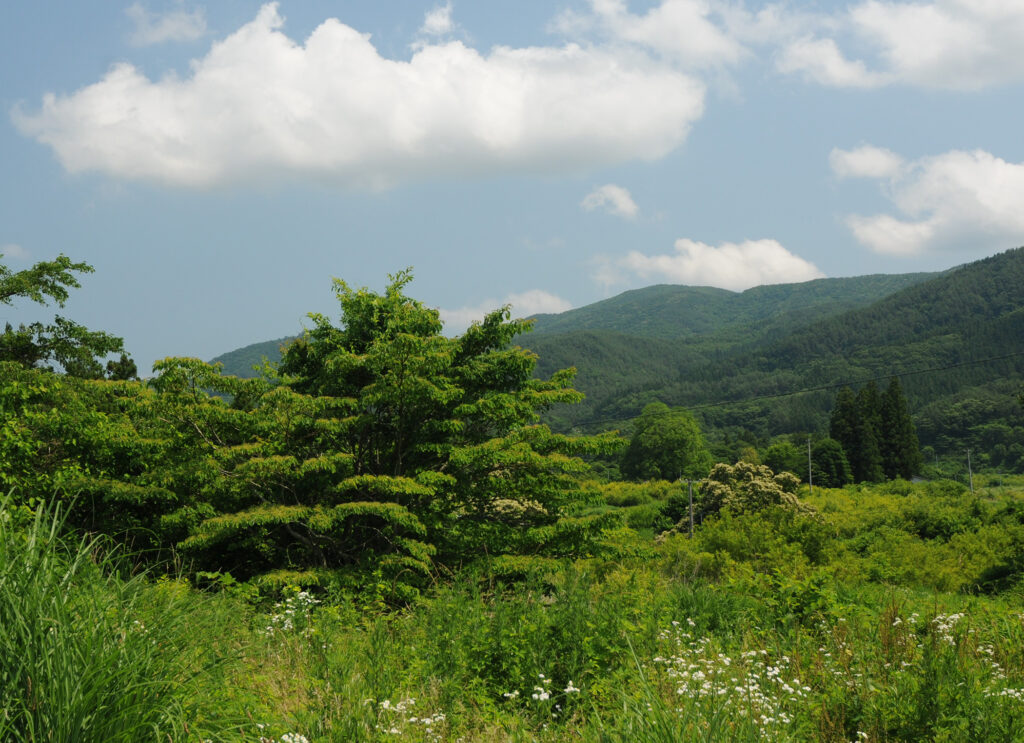 A view of the mountains near the Fukushima nuclear exclusion zone.

“We’ve put these transmitters on wolves in Chernobyl and now wild boar in Fukushima, and also have put dosimeters on snakes and small carnivores in these exclusion zones. We’re trying to understand how space and time influence their radiation exposure,” added Beasley. “Animals can’t sense radiation, and in fact some of our wolf spatial data (at Chernobyl) suggests they seem to be most concentrated in the more interior part of the exclusion zone, where it’s most contaminated, likely due to the absence of people.”

Later this spring, one of Beasley’s graduate students will travel to Japan to gather data on animal movements inside and outside the exclusion zone. This will give the team a better idea of whether animals’ behavior within evacuated areas differs from animals in non-radioactive environments. Other studies later this year plan to look at radiation and its effects on the animals’ health. 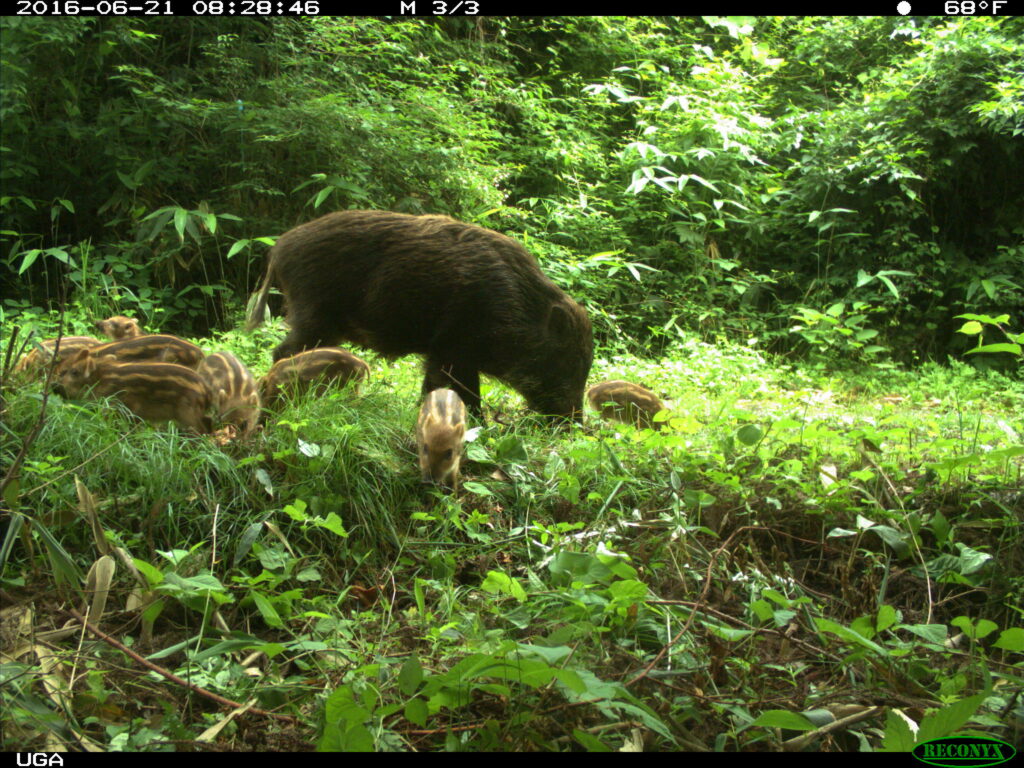 A wild boar and her babies — sometimes referred to as humbugs — graze in Fukushima.

The work has given Beasley and his team a unique opportunity to turn the tables on typical wildlife studies. Often, in his field at least, researchers are investigating what happens to animals when humans displace them. But here, it’s the other way around.

“When (humans) move into an area, animals don’t immediately disappear—it happens over time,” he said. “What happened at Chernobyl and Fukushima are environmental and human tragedies. But in the aftermath, these landscapes have become living laboratories where we have the unique opportunity and responsibility to better understand the effects of radiological contamination, as well as what happens when the humans move out and wildlife are allowed to repopulate at their own pace.”