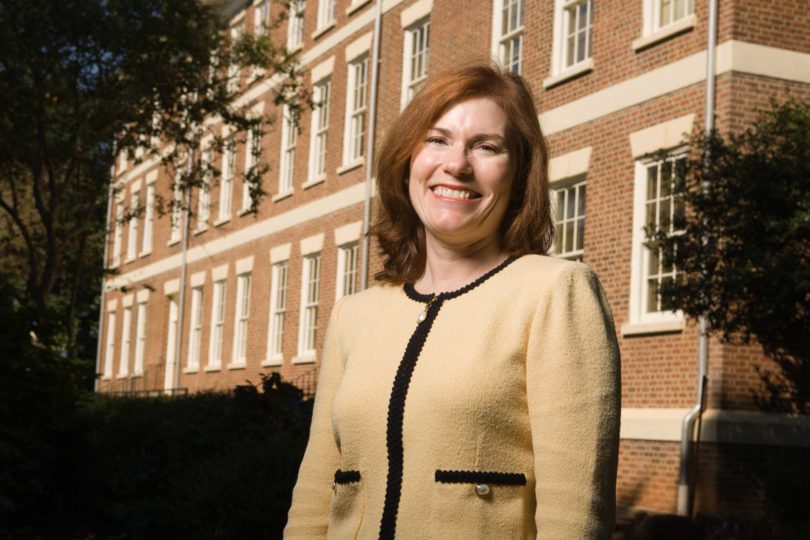 Nearly four years into her deanship

A ceremony will be held at the building Oct. 13 at 10:30 a.m. to mark the conclusion of the rehabilitation work and celebrate the building’s 200th anniversary. The ceremony, part of Homecoming Week, will include a mass ribbon-cutting to symbolically re-open the building.

Construction of Old College began in 1803-two years after UGA began classes in a makeshift wooden structure-and was completed in 1806. The oldest building in Athens and one of the oldest in Northeast Georgia, it has undergone at least two previous major makeovers and numerous minor changes in the past two centuries.

The most recent work began in June 2005 and was finished this past August. It included installation of central heat and air, the addition of an elevator and ramp for disabled access, bathrooms on each of the building’s three floors, new carpet and repair and painting of walls.

Ceilings, which had been lowered in earlier renovations, were raised about two feet to their original height, and a classroom equipped with modern teaching technology was created.

Old College also has new occupants-the dean and administrative staff of the Franklin College of Arts and Sciences, who moved in August from New College. The classroom and presence of the arts and sciences staff reflect the building’s historic past when it was known as Franklin College and served as a residence and dining hall for students as well as classroom space for a few professors who taught Latin, Greek, science and mathematics. In a nod to modern environmental concerns, Old College is also a “green building,” meaning only environmentally safe, biodegradable products are used for cleaning.

The 200th anniversary ceremony is ­scheduled to coincide with Homecoming. Speakers will include UGA President Michael F. Adams; Garnett Stokes, dean of the Franklin College; and Kurinji Pandiyan, a senior majoring in genetics and microbiology from Chennai, India.Also speaking will be George Purd Sessions, a 1952 UGA graduate and retired Atlanta anesthesiologist who is a descendant of John Brown, the university’s president from 1811-1816.

People attending the ceremony will receive a pair of scissors. Old College will be encircled by a ribbon, and on a cue from Adams everyone will simultaneously snip the ribbon. A reception will follow the ceremony.