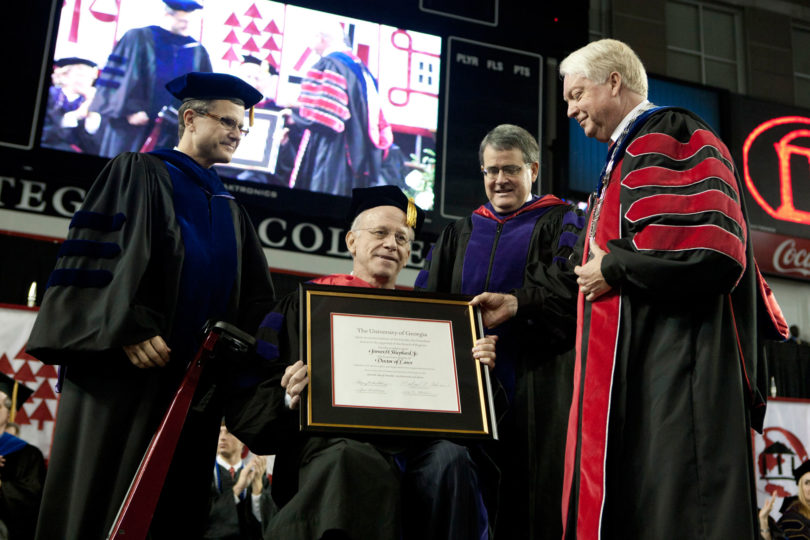 Speakers at the university’s Commencement exercises Dec. 16 used their personal experiences to inspire and inform UGA’s final class of 2011.

James H. Shepherd Jr., chairman of the Shepherd Center in Atlanta; and Syliva McCoy Hutchinson, professor emerita of education at UGA, respectively delivered the keynote addresses at the undergraduate and graduate ceremonies in Stegeman Coliseum. Both are UGA alumni.

“The story of our lives is not what happens to us,” Shepherd said. “It’s what we do about it.”

Shepherd candidly spoke about a near-fatal bodysurfing accident that initially crippled him, but ultimately led to the founding of the Shepherd Center two years later.

The center is the country’s largest catastrophic care hospital, and specializes in the treatment of people with spinal cord injuries, acquired brain injuries, multiple sclerosis, other neurological disorders and urological problems.

The university awarded Shepherd, along with his parents, J. Harold and Alana Shepherd, honorary degrees for their philanthropic commitments and contributions to UGA and the state of Georgia.

Later that day, Hutchinson spoke about her life at UGA as both a student and a professor at the graduate ceremony.

She urged graduates to keep in contact with their professors and peers past graduation, as she has.

“One way you will continue to build your relationships in the future is to stay in touch with your professors throughout your life,” she said.

“Our interest and pride in you goes far beyond graduation day. Your degree is your passage away from here, and then back to us.”

The college experience, she said, doesn’t end with the turn of a tassel. Instead, it stands as a single thread in the tapestry of life.

“You will tell the UGA story. And yours will be a fine story,” she said. “You will tell your UGA story in your companies, your offices, your laboratories, your classrooms. And in that telling, you will invite the finest, most capable young people in turn to join our UGA partnership.”

Approximately 2,225 students were eligible to receive degrees at the Commencement ceremonies.