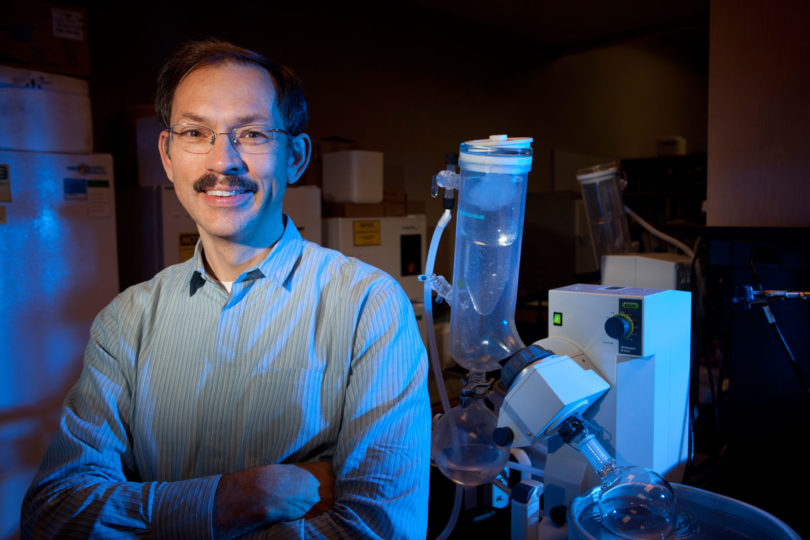 Geert-Jan Boons is the Franklin Professor of Chemistry in the College of Arts and Sciences.

For distinguished achievements in the arts and humanities
William Kretzschmar, the Harry and Jane Willson Professor in Humanities, is recognized as an international leader in each of his four primary areas of research: American English studies, English ­lexicography, corpus linguistics and language variation studies. He is editor-in-chief of the Linguistic Atlas Project, the oldest and largest ongoing American English survey project in the U.S. Under his leadership, UGA has become a national center for dialect research, and the materials of the LAP are the best source for the history of mid-century American English. Kretzschmar is the American pronunciation consultant for the Oxford English Dictionary and American editor of the Oxford ­Dictionary of Pronunciation for Current English. Kretzschmar is also a pioneer in the field of humanities computing. He has introduced numerous techniques of computer mapping and statistical analysis to his field, and has continued his leadership by showing how patterns of language as it is spoken and written can be explained with complexity science.

For distinguished achievements in the sciences
Rick Tarleton, the Athletic Association Distinguished Professor in the Biological Sciences and Distinguished Research Professor, is internationally recognized for his groundbreaking research on Chagas disease and its cause, the parasite Trypanosoma cruzi. Since its establishment at UGA in 1984, the Tarleton laboratory has been a constant source of discovery and innovation. Tarleton’s early research demonstrated that the heart and intestinal destruction associated with Chagas was not the result of immune system dysfunction, as was commonly thought, but was caused by persistent parasitic infection. He has developed a highly productive collaboration with investigators in Argentina, and their studies validated the use of mouse models for the study of Chagas disease. Tarleton also has partnered with numerous groups to ensure his research findings are applied to help those affected by this neglected disease of poverty. His lab is currently developing a promising transmission-blocking vaccine for animals, which are the primary source of parasites that go on to infect humans.

For distinguished achievements in the social and behavioral sciences
Ron Butchart, professor and head of elementary and social studies education, is recognized nationally and internationally for his body of work on freedmen’s teachers in the South after the Civil War and on the history of black education in the U.S. He launched the Freedmen’s Teacher Project, which has identified more than 11,600 individual teachers of freed people between 1862 and 1876. Butchart has compiled these names and biographical information inside a database that is one of the largest individually constructed social history digital databases currently available. This data combined with Butchart’s critical analysis has provided historians with a much clearer picture of the freed people’s teachers, one that necessitates a revision of many previously held beliefs about the education of freed African Americans, the origins of Southern schooling and the history of race and American education.

Michael Arnold, professor of genetics, is one of the world’s best known experts on evolutionary genetics, particularly the study of natural hybridization. He has championed the view of hybridization as a critical evolutionary process in both plants and animals, and he has provided a wealth of empirical data demonstrating that hybridization can be widespread. Through breeding experiments and careful genetic analysis, Arnold has demonstrated that hybridization often leads to significant gene exchange between closely related species. This has far-reaching consequences, as Arnold’s work demonstrates that hybridization is a critical evolutionary process that addresses important questions related to speciation, the origins of new species of plants and animals. He is particularly well known for his study of Louisiana irises, which has become a classic example of the role of hybridization in adaptive evolution and speciation. Arnold is author of three highly influential books and more than 120 academic articles.

Edward Halper, professor of philosophy, has contributed significantly to ancient philosophy and to other areas of philosophy. He is highly regarded as a specialist in Aristotle, especially Metaphysics. Although this Aristotelian work has been widely and intensely studied for more than two millennia, Halper developed a uniquely illuminating approach that he applied in detail in three lengthy volumes. Besides these books, Halper has written a textbook (now in press) and some
50 papers in journals and books. Many of these papers are on the philosophy of Hegel and modern philosophers such as Kant, Spinoza and Nietzsche. A third specialty for Halper is medieval philosophy and philosophy of religion: He has written on Maimonides and spoken at international conferences. Altogether, Halper has presented more than 100 different papers at various conferences. He is currently the president of the Metaphysical Society of America.

Michael Terns, professor of biochemistry and molecular biology and genetics, is a leading authority in the field of RNA biology. Among his many accomplishments, Terns has revealed the pathways that regulate the activity of telomerase, an enzyme essential to the development of most cancers. His research group has studied extensively the C/D and H/ACA RNPs, enzymes that build and support critical cellular machinery, which has provided key insights into the development of the fatal bone marrow disease dyskeratosis congenital and a common neuromuscular disease called spinal muscular atrophy. Terns also has conducted research into CRISPR-Cas systems, small RNA-based immune systems that protect bacteria from viruses and other threats. These systems are being employed to protect domesticated bacteria used in the production of food, pharmaceuticals and biofuels.

Adam Goodie, associate professor of psychology, studies pathological gambling and the cognitive processes, decision-making and personality characteristics associated with this dangerous condition that affects millions of Americans. Goodie discovered that the likelihood for one to gamble does not depend entirely on objective probabilities or how the individual perceives them, but on whether the individual perceives they can control the probabilities. Goodie developed an instrument to study this called the Georgia Gambling Task, in which study participants answer trivia questions, indicate the likelihood that their answer is correct and decide whether to accept bets on their answers. In his studies of active gamblers, pathological gamblers were willing to bet regardless of their level of control over the game, whereas nonpathological gamblers only bet when they actually had control. This leads to the suggestion that pathological gamblers are more easily convinced that they are in control of the game when in fact they are not.

Michael Hahn, professor of plant biology, is a pioneer in research on plant cell walls. His laboratory has generated more than 150 new antibodies that recognize specific carbohydrate structures within plant cell walls, thereby quadrupling the number of such antibodies that exist worldwide. This antibody toolkit provides new tools to researchers and is available through the CarboSource stock center. These antibodies have made possible, for the first time, broad and comprehensive studies of plant cell wall biology. Hahn’s lab has developed a reliable robotized system that makes possible the rapid screening of cell wall/biomass samples for the presence of specific structures recognized by the antibodies in the toolkit. His lab also utilizes the antibodies for visualization of where cell wall structures are located in plant tissues, providing new insights into how walls change during plant development and for observing how cell wall structure is altered during biomass processing for the production of biofuels and other products.

John Lynch, professor of music and UGA director of bands, is a leader in the field of new music for wind ensemble, a relatively new medium that began in earnest when serious composers started writing for the genre in 1950. Lynch is a staunch supporter of contemporary music, and he has commissioned and premiered many new works. His concert programs always include recently composed music, and his various professional recordings feature new music prominently. His latest compact disc, Street Song, which will be released in July on the international Naxos label, gave UGA students a professional recording experience with some of the top engineers and producers in the business. The CD contains four contemporary works, two of which Lynch commissioned. Lynch is also the creator and artistic director of the “neXt festival of Contemporary Music,” which brings together new and established composers writing for wind ensemble, and he founded UGA’s Arch Award for Contemporary Wind Compositions.

Robin Shelton, associate professor of physics and astronomy, is a world expert on our galaxy, the Milky Way. She is particularly interested in the interstellar medium, the gas between the stars. Shelton played a seminal role in revising the Local Bubble model, the theory that violent stellar explosions created a bubble of hot gas around the solar system. By analyzing X-rays, the key evidence for the Local Bubble, Shelton’s research team demonstrated that their brightness is related to the sun’s activity cycle. Thus, most of the X-rays come from the solar wind, not hot interstellar gas. In addition, Shelton has become interested in massive clouds of gas that are falling into, enlarging and energizing our galaxy. Using a cluster of high-performance computers, her group simulates the interaction between these massive gas clouds and material within our galaxy. Her group is the first to accurately track the ionization of the gas, thus enabling them to compare with sophisticated observations.

The award recognizes an inventor for a unique and innovative discovery that has made an impact on the community.
Geert-Jan Boons, the Franklin Professor of Chemistry, is renowned for his many contributions to the field of carbohydrate and glycocongugate research. His group has studied extensively the development of new and better methods for synthesizing complex molecules; the use of new methods in the synthesis and study of complex carbohydrates; the development of synthetic cancer and bacterial vaccines and the use of synthetic compounds for the study of innate immunity. In his most recent work, Boons has developed a vaccine for cancers that share a distinct carbohydrate signature. This carbohydrate-based vaccine elicits a very strong immune response by activating all three components of the immune system, and it has shown great promise in rodent breast cancer models. Boons has developed a number of other novel technologies related to metal-free click chemistry reactions, heparin sulfate synthesis and foodborne illness. He has 13 active disclosures,
10 pending U.S. patents, more than 15 pending international patents and his own start-up company called Viamune.

Established in 2010, the award recognizes a faculty member who has started a company within the past four years based on research.
Tom Robertson, an associate professor of physiology and pharmacology, is CEO and co-founder of IS3D LLC, which creates revolutionary educational software that shows great promise as a more effective teaching tool in science education.
Robertson and his partners began by developing highly realistic, three-dimensional models and animations of basic cell structures and processes, which were designed to replace the traditional two-dimensional illustrations and descriptions used in textbooks and classrooms. Students using this technology showed much higher rates of interest and understanding when compared to peer groups taught the same material with traditional methods. IS3D has since developed even more advanced learning modules that make students active participants in the learning process. Their products allow students to explore three-dimensional spaces inside the human body, collect data from the virtual world, develop their own hypotheses and even play science-themed games on mobile devices. In so doing, students learn about fundamental biological processes such as diffusion, osmosis and filtration.