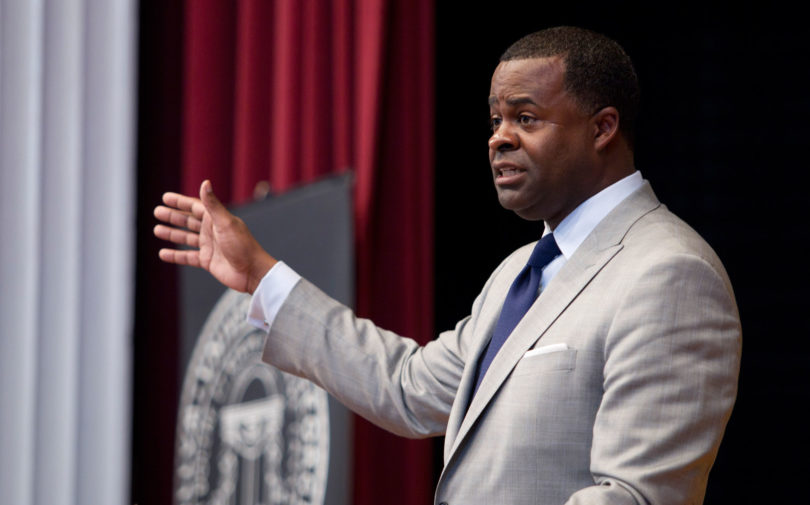 Atlanta Mayor Kasim Reed told those in attendance at the Holmes-Hunter Lecture that the U.S. must now see diversity as an economic imperative.

Conversations about race in America have become harder to have, but they’re vital to the country’s future, Atlanta Mayor Kasim Reed told a packed crowd March 7 at the 2012 Holmes-Hunter Lecture in the Chapel.

“This lecture is a moment for all of us to reflect on what has been done and talk about what we’re going to do going forward,” Reed said. “What Hamilton Holmes and Charlayne Hunter-Gault did was difficult. But I will submit that whenever barriers are shattered, they leave debris. And working through the debris can often be as difficult for the next generation that comes behind as shattering the barriers was originally.”

The lecture honors Holmes and Hunter-Gault, the first two black students admitted to UGA. Since their admittance in 1961, racial issues in America have become more subtle, though still important, Reed said.

“Race relations can get tough once you move away what is simple and what is apparent,” he said. “You can feel pretty good about yourself once you remove the signs over water fountains that say ‘Colored’ and ‘White,’ once you integrate our schools and universities. But I came to UGA to have a conversation about why it is important for us to continue to work at it, even though the University of Georgia has done as good a job as any school in America in making itself more inclusive and more welcoming. It’s worth it because the juice is worth the squeeze.”

Instead of a moral dilemma, the country now must see diversity as an economic imperative, he said.