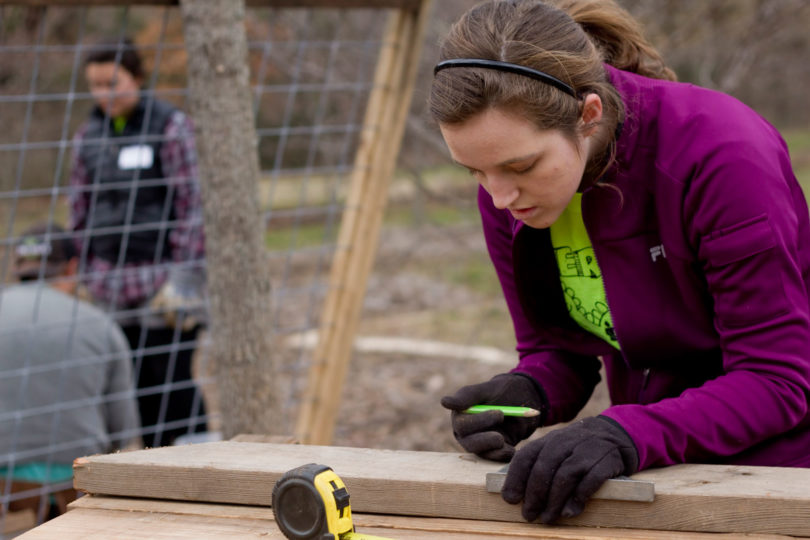 For a few hours on Jan. 16, UGA student Olufeyisayo Bab-Oke took a pickaxe to a slab of asphalt outside the Athens Community Council on Aging. A few feet away, about 50 other students hauled mulch, installed raised garden beds and cleared brush.

Together, they were building the first phase of an intergenerational garden that will be used by both senior citizens and UGA students to learn about sustainable farming. They also were lending their time toward fulfilling a dream enunciated by Martin Luther King Jr. nearly 50 years ago.

“It’s actually my first time doing work on Martin Luther King Jr. Day,” said Bab-Oke, a first-year student in biomedical engineering. “Normally I just sleep or take a rest day, but now that I’m older I felt more responsibility to get out and do something to honor the legacy of Martin Luther King.”

The garden represents a collective effort by UGA’s Office of Service-Learning, Hands On Northeast Georgia, the Athens Land Trust, Georgia Power and other organizations. It should be ready for its first planting by spring, said Shannon O. Wilder, director of service-learning at UGA.

“We’ve had a long-standing partnership with the Council on Aging to develop service-learning course and service opportunities for students, and this is one piece of that,” she said. “It’s being funded by a USDA grant that the Athens Land Trust received. This particular garden is going to be a demonstration garden that will connect Council on Aging programs and UGA courses in nutrition, food waste, food access and gerontology.”

The 17 raised beds, two compost bins and fence were all built by UGA students using wood salvaged from local projects, such as remodeled campus structures or razed community buildings, that would normally be discarded. It’s part of an effort led by graduate student Chris McDowell in UGArden.

“This particular material came from a barn in Oconee County, where we took in 15,000 linear feet of wood,” he said. “It’s easier for a contractor to pay his crew to throw this kind of wood away than to de-nail it. But I have the luxury of student labor, so that aspect makes it a lot easier for me to run this program. The amount of money in these beds, if we had to buy this material at the store, would easily be thousands of dollars.”

The garden was just one of the MLK Day projects spread throughout the Athens area in which residents and UGA faculty, staff and students donated their time and effort to improve the community.

“We had 120 students spread over four different sites,” said Rick Gray, senior coordinator for UGA Service Ambassadors, an organization that connects UGA students with volunteer opportunities in the area. “We had a project going on at the Boys and Girls Club doing outdoor stuff for their playground area. We helped with a rain garden at Cedar Shoals High School; and we did a similar project to this through the Athens Land Trust at Hill Chapel.”

But for Terrance Rhodes, a social work major, the real reward comes from the effort, not the results. “It is important to give back to the community when you can,” said Rhodes, who also is a service ambassador. “It’s good to see people involved because they realize the importance of what Martin Luther King did for us.”