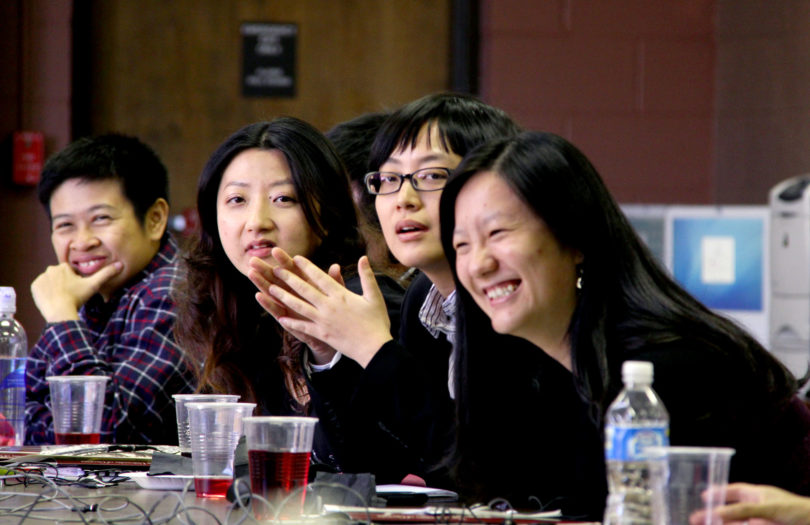 Trade relations between the U.S. and China may have been one of the talking points in this year’s presidential race, but it was the differing practices of the two nations’ media institutions that dominated the discussion at Grady College the day before the election.

Six Asian journalists who cover China were part of that talk when they visited UGA on Nov. 5 as part of the U.S. Department of State’s Edward R. Murrow Project for Journalists.

The program, run in coordination with top U.S. university journalism programs, brings 150 international journalists to the U.S. each year to showcase American journalistic practices. Its aim is to help journalists from other countries understand how a free press operates in American democracy, explore private and political structure in the U.S. and discuss trends and challenges in the industry with other professionals and academics.

This year marks the fourth consecutive year that Grady College has participated in the program. That’s impressive considering that only 10 journalism programs are picked every year, out of nearly 500 in the U.S.

The visiting fellows toured campus and spoke with professional journalists, students and faculty. To foster discussion, Grady College hosted a talk attended by five of the fellows, their translators, faculty and students.

During the discussion, the international journalists asked questions about American politics, in particular wondering who would win the presidential race and what kind of involvement college students had in elections.

In turn, students and faculty were curious about the Chinese government’s involvement in journalism.

Maura Friedman, a senior journalism and political science major, asked the fellows to comment on media censorship in China and how it affects the way they work and the stories they tell.
The journalists seem to agree that censorship did provide some barriers in the types of stories they could cover.

“When you report something, you have to use your judgment,” said Yong May Han, the news editor of Lianhe Zaobao, a Chinese-language, Singaporean-owned newspaper.

Another Murrow Fellow, who requested not to be identified in news stories covering the event, pointed out that Chinese censorship was similar to how political correctness in America causes some media outlets to self-censor.

Still, several fellows talked about the use of social media and other creative ways to skirt censors in getting important news to the public.

“I think we are in the middle of a very exciting stage with the press,” Han said. “Because we don’t have full press freedoms, I think our job is more challenging than that of American journalists.”

After the discussion, Friedman said she was impressed by how some international journalists manage to give important news to the public despite government censorship.

Tudor Vlad, a professor in the Grady College and the assistant director of the James M. Cox Jr. Center for International Mass Communication Training and Research, said the visit by each group of Murrow Fellows is instructive for students and faculty.

Past Murrow Fellows at UGA include from journalists French-speaking African nations and a group from the former Soviet states.

“It’s really useful for the faculty and the students here because they have been exposed to journalists from various parts of the world,” said Vlad. “Students can take for granted things like press freedom and access to information. Suddenly, they realize there are some people who sometimes risk their lives in other parts of the world to do journalism.”