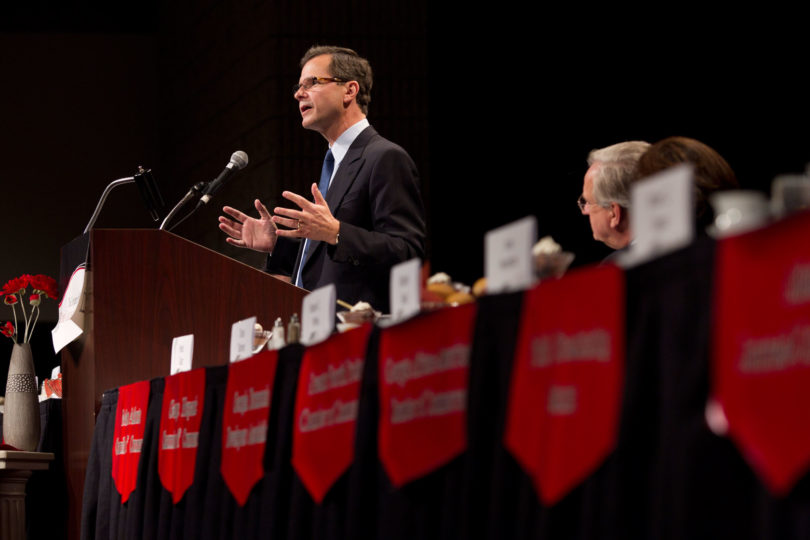 Dean of the Terry College of Business Robert T. Sumichrast gives the state outlook during the Georgia Economic Outlook 2012 luncheon at the Georgia World Congress Center in Atlanta

Slow growth remains the mantra of the Terry College’s economic outlook for the state of Georgia for 2012.

“Our forecast is for more of what we have seen the past couple of years,” said Dean Robert T. Sumichrast. “We might see continued slow growth or, technically, we might see patches of recession. Either way, unemployment will remain high.”

Sumichrast delivered the 2012 forecast of the Selig Center for Economic Growth to an audience of Atlanta executives and government leaders attending the 29th annual Georgia Economic Outlook.

He said the financial crisis and the bursting of the housing bubble dealt a blow to the state’s economic growth-more severe than in other states-and caused the steady influx of people and businesses migrating to Georgia to stop abruptly.

That resulted in a “painful restructuring” of Georgia’s economy to move away from the state’s overdependence on real estate development to fuel growth.

“As of mid-2011, it appears that this massive private-sector restructuring has nearly run its course,” he said. “Property assets have been fully re-priced. And, outside of the financial sector, corporate balance sheets are pristine. Households have also improved their balance sheets.”

“If we hope to be more than an average state, we must change our policies and economic development strategies,” he said. “The population growth driver stopped working during the Great Recession, and we should not make major investments to reinvigorate it.”

Sumichrast offered several ideas to fortify weaknesses in the state’s economic strategy. Among them:

• Economic development incentives. Though the pace of corporate relocation has slowed in the current climate, the state needs to become more aggressive with the incentives it offers companies to locate or expand in Georgia.

“We live in the region of the country where states use incentives most aggressively, but too often Georgia is not able to do what it takes to close the deal,” he said. “Georgia will have to be more assertive when it comes to offering deal-closing incentives for major projects, especially when those projects show good potential for long-term growth.”

• Supporting research and development. “R&D as a share of Georgia’s GDP is less than half the national average,” Sumichrast said. “Georgia scores very well on academic R&D, but we do not score well when it comes to R&D funded by businesses or state agencies. As a result, Georgia does not generate as many patents as you would expect.”

Going forward, Georgia is unlikely to outperform the nation unless we change our economic development strategy,” he said.