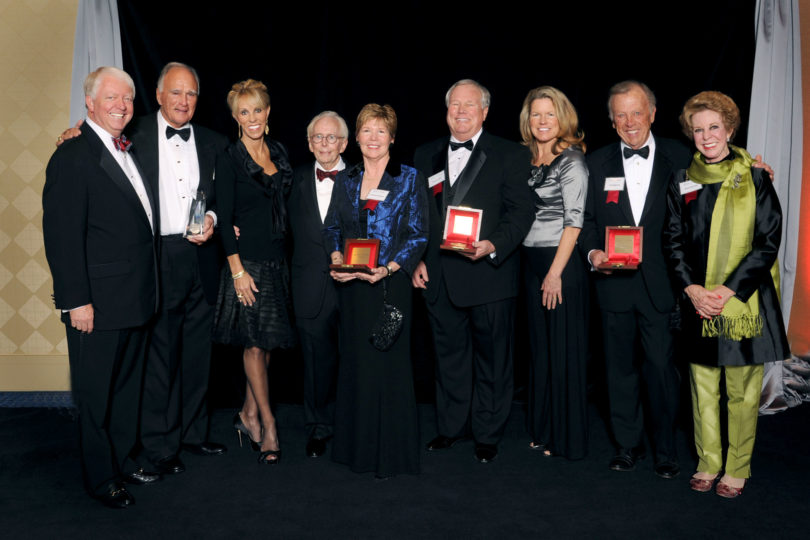 Several of UGA’s donors were recognized for their generosity at the 2013 Celebration of Support Feb. 9 in Atlanta.

“Their tremendous generosity and their lasting commitment to this university are testimony to a giving spirit which I find very moving,” Landrum said.

Amanda and Greg Gregory have given more than $1.1 million to UGA, primarily to support the study of history. The couple’s gift established the Amanda and Greg Gregory Chair in the Civil War Era in the history department, which is part of the Franklin College of Arts and Sciences. The Gregorys also gave money to support Civil War era studies for graduate students and faculty members.

“Mr. and Mrs. Gregory are two of those people who have been very generous with their support to the history department, particularly to graduate student research,” said Angela Elder, a doctoral student in history. “Not only do the Gregorys financially support graduate students and their archival work, they also have a genuine interest in our discoveries. I have greatly enjoyed my conversations with them about my research.”

The couple also provided a $10,000 gift that is being used to bring a prominent historian to UGA to conduct special seminars with students and to deliver a public lecture. Victoria Bynum, professor emerita of history at Texas State University-San Marcos, gave the inaugural Gregory Visiting Lecture in 2010.

Kroger’s more than $1.4 million in donations to UGA has helped support the university’s teaching, research and service missions.

“As a third-year student currently studying in Augusta, I have benefited from Kroger’s financial support through access to the Kroger Learning Center and participation in the White Coat Ceremony, which Kroger sponsors,” said Samantha Burke. “Getting my white coat was a tangible sign that my dream of being a pharmacist was closer to becoming a reality, and I am very grateful to Kroger for that.”

Kroger also supported the Pharmacy South building expansion. In addition, the company’s gifts have helped Cooperative Extension in the College of Agricultural and Environmental Sciences.

Craig and Diana Barrow and the Wormsloe Foundation Trustees have given $1.1 million to help support UGA programs including the university’s libraries, the University of Georgia Press, the Office of Academic Affairs, the Franklin College of Arts and Sciences, the Graduate School and the State Botanical Garden.

“As a Wormsloe Fellow in the College of Environment and Design, my work has focused on cultural landscape research and environmental design. This work would not have been possible without the generous contributions of Mr. and Mrs. Barrow,” said Wes Ryals. “I would like to thank them, along with other members of the Wormsloe Foundation, for their steadfast devotion and generosity to the university. Such generosity is echoed by the family’s longstanding tradition of support for the University of Georgia.”

The foundation supports the Wormsloe Institute of Environmental History, which partners with schools and colleges across campus including the College of Environment and Design and the Eugene P. Odum School of Ecology. The foundation also aids in the preservation of the DeRenne Collection, a group of books and manuscripts—housed in the special collections libraries—that documents Georgia’s history since Colonial times.

Leebern, who has spent the past 20 years helping support UGA, has given gifts totaling more than $7 million. His donations have been used to finance programs in the Athletic Association, the Division of External Affairs, the School of Public and International Affairs, the Terry College of Business, the Performing and Visual Arts Center and many special projects.

Leebern has endowed four scholarships for football and gymnastics as well as provided support for the baseball, golf, tennis and basketball programs. During the past 10 years, he has helped fund 34 full student scholarships.

“I am proud to be a recipient of the Leebern Football Scholarship, and I’m privileged to be a Georgia Bulldog,” said Arthur Lynch, a tight end on the football team. “The Leebern Scholarship has allowed me to fulfill my dream of playing Division I football, but more importantly, it taught me the true value of an education. It has provided me with opportunities I never thought existed and continues to open doors for my future daily. For that, I am forever grateful.”