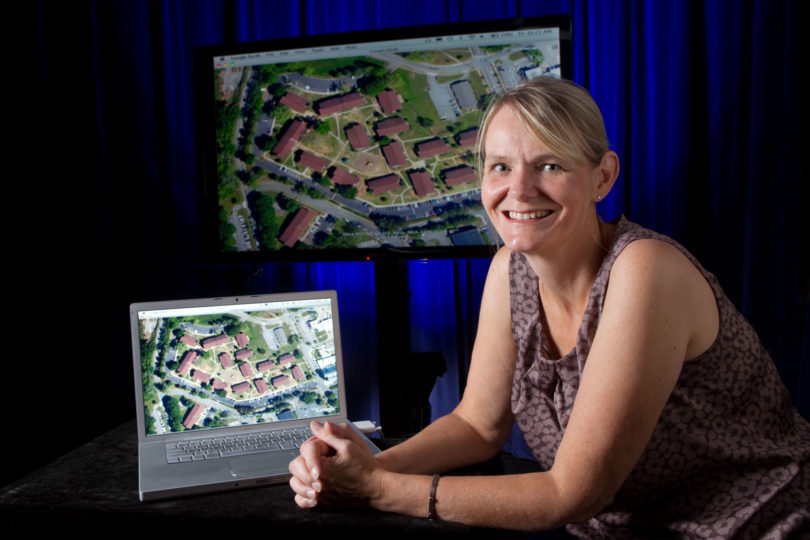 This past spring, Kimberly Skobba took her students to a part of Athens most had never driven by, much less visited. The service-learning class became proficient in the assistant professor’s favorite research technique-interviewing-through talking to residents of the Jack R. Wells Homes, located just off Hawthorne Avenue in west Athens.

The Athens Housing Authority started demolition on the public housing complex, more commonly known as Pauldoe, earlier this year. A mixed-income development will be built in its place.

Before the neighborhood was stripped down to its foundations, “the students interviewed the residents, focusing on how they felt about living there and then about moving,” said Skobba, who works in the College of Family and Consumer Sciences’ housing and consumer economics department.

Some had lived in Jack R. Wells Homes for decades. Its last housing manager grew up playing among the buildings and came back as an adult to live and work in the community.

For Skobba, the project didn’t originate when she was named a Service-Learning Fellow at UGA for the 2012-2013 academic year.

“I’ve always been interested in where people live and neighborhood demographics,” she said, “especially why people in low-income households move so often and what they do or do not accomplish by moving.”

The technical terms for what she studies are chronic mobility and serial inadequacy. She’s most interested in chronic mobility-individuals or families who move every few months-especially in families with children.

Skobba received her bachelor’s degree from Augsburg College in Minneapolis in 1997. A few years working in public relations left her desiring more out of a career, and she headed to the University of Minnesota to earn her master’s degree in design, housing and apparel, which she did in 2002.

Skobba worked in the nonprofit housing field for about 15 years, starting a consulting business in the last five.

In 2008, Skobba finished her doctorate, again at Minnesota. Her research centered on the influence of Section 8 vouchers on the housing careers of working poor families.

“I’m very interested in the community that forms in low-income communities, the idea that if you don’t have financial resources, people become your form of capital,” she said.

After a few more years consulting, Skobba missed academics and packed up her family and moved to Athens.

August marked the start of her third year at UGA. With a service-learning fellowship finished and a summer session course in London behind her, Skobba’s looking forward to writing more research articles and book chapters. She’s also teaching two undergraduate classes this fall and three in the spring. In introduction to housing, she covers subjects from housing styles to the foreclosure crisis. She also teaches property management law, management of government-assisted housing and housing and community development.

As for the students who spent their spring semester interviewing Pauldoe residents-they’re waiting on the results of their hands-on work.

“We’re writing a book or booklet that includes their interviews,” she said. She can’t wait to pass on a little piece of history to her students and, more importantly, the residents who made Jack R. Wells their home.