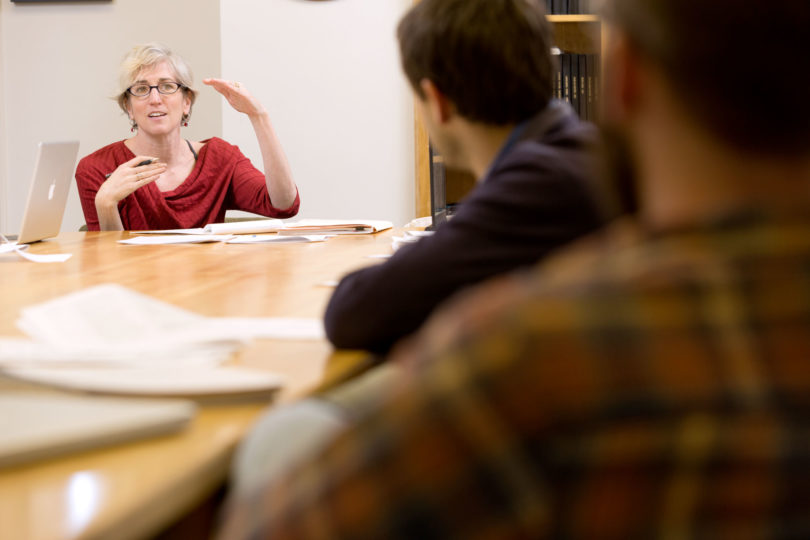 Two faculty members will be named Josiah Meigs Teaching Professors April 15 at the 2013 Faculty Recognition Banquet at the Georgia Center. The professorship is the university’s highest recognition for instruction at the undergraduate and graduate levels. Meigs Professors receive a permanent salary increase of $6,000 and a fund of $1,000 for academic support.

Peggy Brickman’s teaching philosophy is largely about utility, and for a professor who teaches biology to nonmajors, this means teaching young people how to use science.

Because her research focus is introductory college-level science courses, Brickman’s classroom is her laboratory. Working with large classes of undergraduates, she explores new methods to instill a motivation for learning the skills to navigate the world.

“I’ve done a lot of work trying to figure out what those skills would be,” Brickman said. “There are so many ways to learn about information, but it’s crucial to be able to apply what we know and understand how it might be relevant, to be able to evaluate a source or tease apart an argument and try to find the flaws in it from a scientific perspective.”

Brickman is a Senior Teaching Fellow at UGA and recipient of the university’s Richard B. Russell Award for Excellence in Undergraduate Teaching. Her efforts to improve biology education have been featured in the popular press and recognized by her peers with induction as a National Academies Education Fellow in the Life Sciences in 2004. Despite the fact that she teaches nearly 700 students per semester and cumulatively has taught more than 13,000 UGA undergraduates, the key to Brickman’s success is a personalized approach. Her passion for educating students appeals to the individual experience of each person in every class.

“She is the best teacher I have ever had in a science class,” said one undergraduate student. “She unlocked my interest in a subject I had avoided, and I became fascinated about science because of Dr. Brickman.”

Her drive for sharing knowledge also extends toward colleagues and the next generation of teachers in her instructional mentoring of graduate students, postdoctoral fellows and STEM education researchers at other institutions.

“Peggy has helped us see the critical need for good teaching in the large-enrollment introductory classes, general education courses and to think critically about our own classroom practices,” said a 2012 letter signed by faculty members from around the nation. “Several of us have been inspired to make transformative shifts in our curricula and classrooms, and Peggy has supported us throughout the process.”

But it is her focus on nonmajors at the undergraduate level that creates a platform for navigating a complex world: acquainting students with the quantitative evidence and research methodologies they will need as responsible adults and citizens.

“It can be quite challenging, when we have the opportunity to get somebody to become what I’ve heard referred to as a competent outsider,” Brickman said. “So that they can consume theories, facts, ideas and evidence, not necessarily to do science in their own life but to have the ability and confidence to look at things and make real decisions.”

No matter what course she’s teaching, Marisa Pagnattaro’s goals remain the same: She wants her students to understand the relevance of their coursework to the outside world and to be inspired toward lifelong learning.

“I often start class with the most relevant articles, often using an iPad to scroll through key news while projecting them on the big screen for our discussions,” Pagnattaro said. “Students have ready access to the full articles linked to each tweet.

“I strive to include news from a variety of sources, such as the New York Times, the Wall Street Journal, NPR, BBC, The Guardian and the WTO, to encourage them to read widely,” she also said. “I’ve found that this is an effective way to stay connected with students between classes.”

Those connections are important to Pagnattaro, but they’re also important to her students. Pagnattaro’s teaching reviews read like thank-you cards from students who say she’s rekindled their enthusiasm for school and piqued their interests in new careers. Many remark on how much time she spends getting to know each student individually, shrinking the feel of her class size to something personal.

“Dr. Pagnattaro guided me through my junior year with recommendations of books to read, stories of personal triumphs and struggles, and most importantly encouragement to be myself and to find the confidence I needed to be a leader,” one student wrote. “What impresses me most is that her support did not end when I graduated. Throughout the summer, and my first semester at law school, Dr. Pagnattaro has continued to be my friend and offer advice.”

Pagnattaro’s zeal for all kinds of learning is evident by the nontraditional path she took to her position: After completing law school and working as a litigation attorney at a large Atlanta law firm, she left that career to pursue a doctorate in English before winding up at a business school.

Since starting at Terry in 2000, she actively has been involved in a litany of teaching-related service activities-from her work with the UGA Task Force on Writing and the First-Year Odyssey Program to helping develop Terry College’s certificate in legal studies and international business co-major.

Pagnattaro is passionate about her research relating to the law in China, which led her to teach in the MBA China Travels Program three times, most recently in 2011. But even across continents, she managed to make legal studies issues relevant and interesting to UGA students.

“Dr. P challenged our class to be prepared to engage in rigorous discussion about Chinese culture, socio-economic strata, educational systems and business practices,” a former student said. “She cultivated an interest in China for me and my classmates that will last a lifetime.”