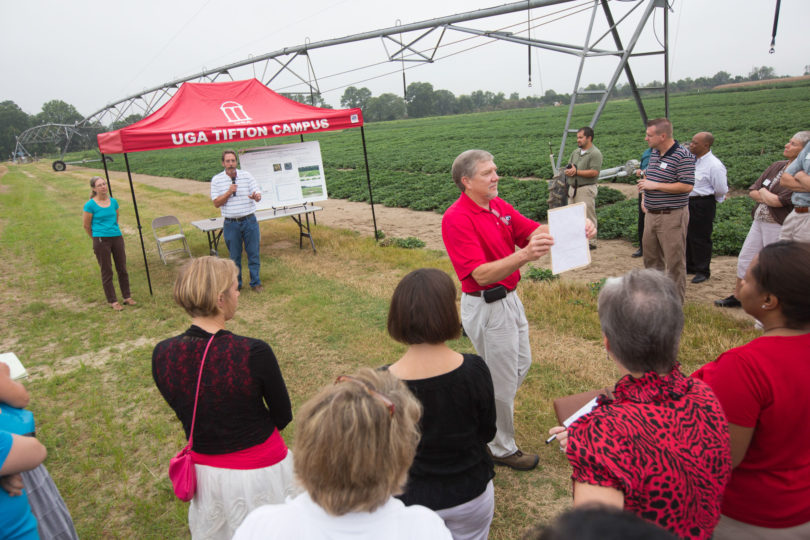 Farm fresh eggs and bacon, homemade biscuits with milk gravy and a lot of coffee greeted UGA employees at Jaemor Farms in Hall County on the first morning of the 2013 New Faculty Tour.

While they ate, and before a tour of the farm, Drew Echols told them a little about Jaemor, which has grown from a family farm into a popular agritourism site in northeast Georgia.

“My granddaddy said, ‘We’re not putting in a corn maze. We’re not growing corn to let people walk through it,’ ” Echols said.

But that corn maze, as well as group tours, educational programs and seasonal activities, turned the farm into a 12-month operation that draws in 130,000 visitors during October alone. In 2006, Jaemor sold 4,000 pumpkins. By 2010, that number had reached 30,000.
“They’re not just coming to buy, ” Echols said. “They’re staying half the day.”

The stop in Hall County was an introduction to agriculture and its importance to the Georgia economy for the 40 faculty and staff members on the five-day tour of the state.

Over the next few days they would learn about other important economic engines in Georgia, visiting the Kia automobile plant, which has generated 10,000 jobs in the region since it opened in West Point in 2009; Columbus’ Fort Benning Army base, which employs 40,000 people from the region; Gulfstream Aerospace Corp., which employs 14,000 people in its jet manufacturing plants in Savannah and Brunswick; and Georgia Biomass, which buys wood from Georgia foresters to make wood pellets that are sold to European countries to burn in place of coal. European countries are under a strong mandate to reduce the level of carbon dioxide, which in part is produced by burning coal. The company says its operation is responsible for 12,000 logging jobs in Georgia.

The tour, sponsored by the Office of the Vice President for Public Service and Outreach, with support from the Office of the Senior Vice President for Academic Affairs and Provost and the UGA Alumni Association, is an opportunity to introduce new employees—those who have been here less than two years—to the state, its people, culture and economy. Through the tour, the faculty and staff were able to identify ways their research could work to assist economic efforts in the state. The tour also exposed local leaders to some of the resources available through UGA as the state’s land-grant institution.

“Contributing to economic development is one of the most important roles UGA can play in the state,” said Jennifer Frum, vice president for public service and outreach. “As President Morehead’s recent focus on our economic development programs makes clear, any way we can stimulate thinking about how our work can support job and wealth creation in the state is a good thing.”

Tim Quigley, a new assistant professor of management in the Terry College of Business, particularly was interested in the group’s visit to Gulfstream Aerospace Corp., which makes private luxury jets. John “Jay” Neely III, deputy general counsel at Gulfstream, told the group that the company used to have 80 percent of its market in the U.S. That has dropped to 50 percent.

“To hear (him) talk about that as a challenge, that’s something those of us in business can help with,” said Quigley, a private pilot who moved to Athens just three weeks before the tour. “It’s just as important to help a successful company continue to be successful.”
Morehead, speaking to the group at a dinner in Gainesville the first night of the tour, reminded the faculty of the public service obligations of a land-grant university, as established by the Morrill Act in 1862.

“It’s critical you keep the land-grant mission of the University of Georgia in mind,” Morehead said. “It’s a mission that crosses all disciplinary areas of our campus. You are the agents of the Morrill Act.”