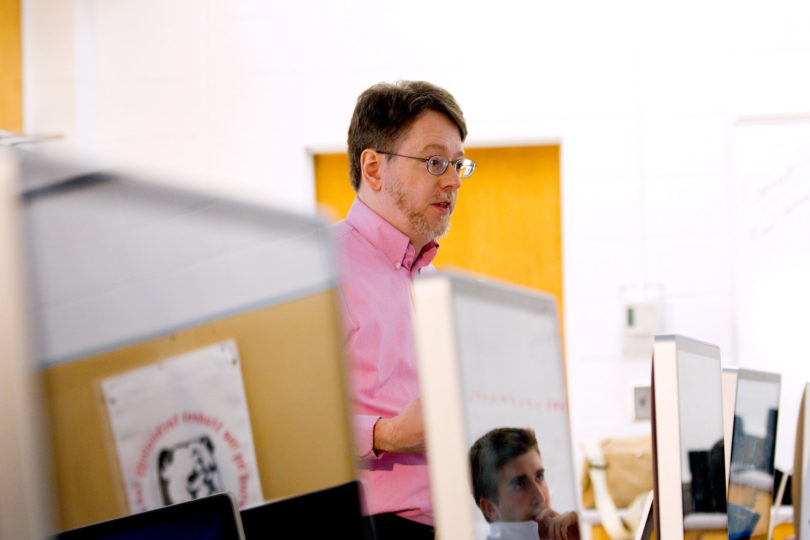 While some instructors dread the challenges of large university classes, John Knox has turned teaching a couple hundred students at once into an art form that those students remember for years to come.

Part of what makes Knox such an effective instructor, according to former students and fellow faculty, is a teaching philosophy that takes an interdisciplinary approach to his subject. He uses history, music and pop culture to emphasize how the subject matter is relevant. He also employs a mixture of teaching methods including role-playing experiments centered on getting students out of their seats.

Joseph Antonio, a former UGA student who is now a middle school math teacher in Norcross, said Knox’s courses were fascinating to him, even though he didn’t have a natural interest in the subject.

“He was relentless in his desire to make the material come alive for the students, whether they were destined to be meteorologists or a middle school math teacher,” Antonio said. “And he always made himself available to students.”

Knox also works to cultivate participation within his larger classes.

“His classroom is a community, his lectures are epic narratives, and he, himself, is pure passion,” said former student Eliese Ronke, now a graduate student in the biological sciences at the University of Arkansas.

Other students have noted Knox’s success in engaging in one-on-one mentoring relationships with undergraduates outside the classroom and as faculty adviser of both the Demosthenian Literary Society and the UGA Aviation Club. The lasting impact of Knox’s mentoring is evident in that five former students are now professors of atmospheric sciences.

As a researcher, Knox has focused on subjects in both meteorology and educational research, earning the National Weather Association’s highest research award in 2010. And in 2012, he was the only geography professor in the nation chosen as one of the “Best 300 Professors” in the U.S. by The Princeton Review.

Working with faculty from the horticulture and foods and nutrition departments as well as the the environmental educator at the State Botanical Garden, Miller created an after-school garden program for Athens-Clarke County elementary school students. UGA students from those disciplines worked in teams with children at the local schools to address issues such as poverty, wellness and sustainability.

The garden program is just one of Miller’s unique classroom experiences. The SAGE Publications and the Council on Social Work Education Teaching Innovation Award recipient describes her teaching method as active, saying she often “encourages students to take risks, to explore ideas out loud and to grapple with and tolerate the uncertainty that accompanies working with humans in human circumstances.”

Miller has employed a range of other methods such as role-playing, small-group discussion, field trips and service-learning in her classes. She also uses a variety of technology such as videos, music and the Internet to help provide more perspective to her students.

While Miller’s use of varied teaching methods in and outside of the classroom has brought her some recognition, it’s her passion and ability to connect with students that makes the biggest impact.

Former students also praise Miller for her enthusiasm and compassion and talk about the effect it had on them.

“When my classmates or I related an overwhelming story from our field experience, she would respond with empathy, but also find strengths in our approach,” said former student Caroline Lozen. “She is the teacher who changed the dynamic of my education from simply retaining information, to making the text meaningful and real.

“It was this new lens on learning that spurred my passion to delve further into the field,” Lozen also said.

Associate Professor of Food Science and Technology
By Merritt Melancon

Ron Pegg’s students know him as one of the only food science professors to still require them to use blue books during exams. However, his colleagues have come to know him as an instructor who is breaking new ground in food science instruction at UGA. Since arriving in 2006, Pegg not only has maintained grant funding for research into beneficial chemical compounds (i.e., bioactives) and nutrients in foods, but he also has developed new laboratory and study-abroad programs that have made him one of the most sought after instructors in his department.

“I must admit that Dr. Pegg’s contribution to student education is indeed rare,” said Rakesh Singh, professor and director of the food science and technology department. “His pedagogical ‘force’ is unique and unlike any other I have seen in my 28 years as a college educator. He has set incredibly high teaching standards for himself, and this has clearly benefited our students.”

Pegg teaches courses ranging from a Freshman Odyssey course on coffee technology to a junior-level introduction to food science class to a senior-level food analysis course and lab to a graduate-level class on functional foods and nutraceuticals. In 2007, he retooled the “Instrumental Methods of Food Analysis” course to include a hands-on lab component in which students learn the techniques and equipment used to determine selected nutrient contents and bioactives of foods. Pegg broke new ground in the food science department when he launched “Coffee (El Grano de Oro): From Bean to Cup,” a Thanksgiving break study-abroad program at UGA’s Costa Rica campus. The course lets students trace one of America’s favorite beverages from the farm to the coffee processor-and provides them with the science behind the perfect cup of coffee.

“One of my primary roles as an educator is to provide the students with real-world or simulated experiences, so that they can discover on their own the need for continued education,” Pegg said. “It is insufficient to theorize how food chemistry happens: I want my students to see and experience it firsthand.”