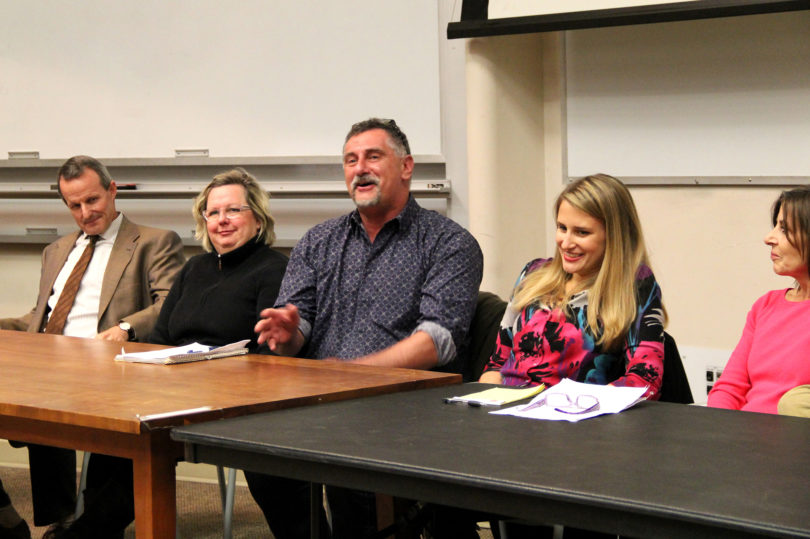 It’s a familiar story for many college students. They find something about which they are passionate, like painting or singing, and their parents worry they will never find a job.

“My dad told me that (music) is a great avocation, but you need to find a vocation,” said Rob Gibson, who received a bachelor’s degree from UGA in 1981. Gibson participated in a panel discussion that was part of the 2013 Spotlight on the Arts festival in which he and others used data and their personal experiences to show that art is a realistic career path.

Today, Gibson is the executive and artistic director for the Savannah Music Festival, an event that earns $3.5 million every year. Seven other alumni and faculty panelists shared similar success stories and bolstered their argument with data such as a recent survey by Georgetown University that found drama and theater arts majors had the eighth lowest unemployment rate of all college majors at 6.4 percent.

The disconnect between the perception of arts careers and the reality stems from a flawed definition of success in the arts, said panelist Dan Bara, professor in the university’s Hugh Hodgson School of Music.

“If making it as a singer in the arts is just singing at the Metropolitan Opera, there are many people who don’t make it in the arts,” said Bara, who has made a successful living as both a performer and an educator of music.

Two themes continued to resurface throughout the discussion: the importance of being well-rounded and the necessity of being passionate about the arts.

“The key is finding that other skill you have, and you can’t teach passion,” said Kim Nogi, publicist for the Atlanta Symphony Orchestra.

Nogi, who earned bachelor’s degrees in journalism and music from UGA in 2009, offered a different career route for arts students: she works on the business end of an arts organization. As a publicist for the ASO, she can use her business skills while still being surrounded by her passion.

Chris Wells, who created special effects for blockbusters such as Avatar and Green Lantern, shed some light on how the entertainment industry has changed in recent years.

“It used to be, you come here (college), you learn what you can, put some kind of résumé together, then you fly to L.A. and hope for the best,” said Wells, who received a bachelor’s degree from UGA in 2010. “Thanks to social media, you have a much wider audience, and a lot of people who will watch what you do as an artist.”

The most important piece of advice, Wells said, is to be as well-rounded as possible. Wells said an eclectic attitude forces one to think abstractly, which is a necessary skill for all arts careers.
Students appeared to be encouraged by the discussion.

“It really showed me the importance of being well-rounded and helped me see the bigger picture of careers in the arts,” said Luke Cho, a first-year pre-business major.