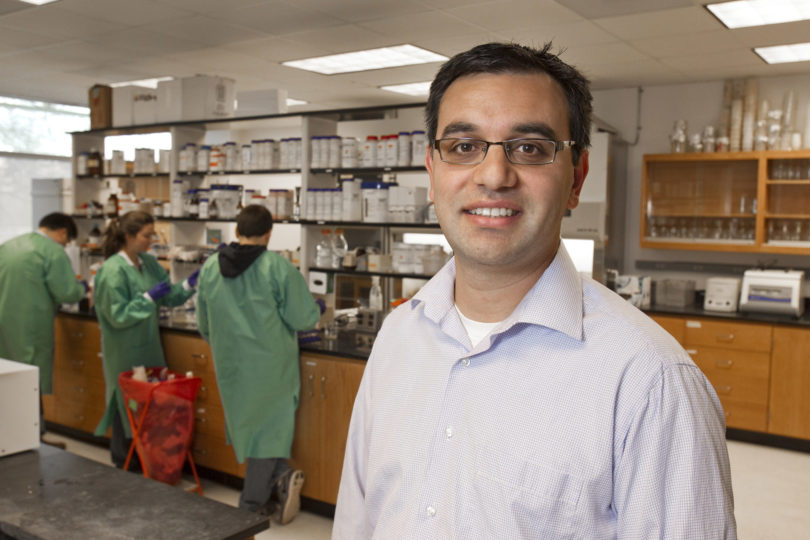 The Creative Research Medals were presented April 10 to five ­faculty members for their outstanding research or creative activity within the past five years that focuses on a single theme identified with the University of Georgia.

Walid Alali, an assistant professor of epidemiology at the College of Agricultural and Environmental Sciences’ Center for Food Safety, conducts critical research focused on the epidemiology and control of salmonella in poultry production. Poultry meat is a significant source of salmonella infections, and Alali’s research provides an improved understanding of the pathogen’s frequencies and transmission dynamics. He led a project funded by the USDA to collect data on salmonella in poultry from emerging market countries, such as China, Russia and Colombia, where there was little data or the data did not exist.

Alali investigated the presence of antibiotic resistant strains of salmonella in these locations and found high levels of multi-drug resistance in these organisms. Alali worked closely with the World Health Organization and local officials to plan and execute a response to this problem. From these experiences, he has published a series of well-reviewed manuscripts in some of the field’s top journals.

Phaedra Corso, a professor of health policy and management in the College of Public Health, has been a pioneer in the application of economic evaluation methods to inform policy making in public health. Economic evaluation refers to applied analytic tools used to systematically assess the impact of policies, programs and practices on costs and health outcomes. Increasingly, governmental funding sources require, in addition to efficacy and effectiveness data, economic evaluations of programs to justify allocation of resources to providers. Despite their value, the field of public health is in the nascent stages of fully incorporating economic evaluations into its mainstream research.

John Drake, an associate professor in the Odum School of Ecology, is an internationally recognized expert in population dynamics. He is particularly well known for his program of experimental research into the causes of population extinction. Drake’s work provided the first experimental support for a longstanding theoretical conjecture and resulted in the description of several new phenomena exhibited by biological populations on the brink of collapse.

This research culminated in a study proposing and showing for the first time that characteristic statistical fluctuations known as “critical slowing down” may be used to devise early warning signals of environmental deterioration. The possibility of translating these early warning signals into systems for predicting catastrophic change in diverse areas of concern-including climate, economic and financial networks, the transmission of infectious diseases and biomedicine-is implied by their generic origin.

Tianming Liu, an associate professor of computer science in the Franklin College of Arts and Sciences, and his students have developed a map of the human brain. Named DICCCOL, which stands for Dense Individualized and Common Connectivity-Based Cortical Landmarks, this map shows great promise as a new guide to the inner workings of the body’s most complex and critical organ.

The DICCCOL map is a next-generation brain atlas that will be an alternative option to the atlas created by German anatomist Korbinian Brodmann more than 100 years ago, which commonly is used in clinical and research settings. The landmarks were discovered using diffusion tensor imaging, a neuroimaging technique that allows scientists to visualize nerve fiber connections throughout the brain. Unlike many other neuroimaging studies, this map does not focus only on one section of the brain, but rather on the whole cerebral cortex.

Michael Usher, an associate professor of mathematics in the Franklin College of Arts and Sciences, developed a new tool known as “boundary depth,” which helps mathematicians working in the field of symplectic geometry better understand the intricacies of an important geometric space known as the group of Hamiltonian diffeomorphisms. While Usher’s contributions are in pure mathematics, the field of symplectic geometry was born from and strongly is tied to applications in physics. Hamiltonian diffeomorphisms of symplectic manifolds provide a unified perspective on the dynamics of physical systems according to the laws of classical mechanics. They are used to mathematically model those physical systems in which energy is preserved. Greater insight into these transformations has improved our understanding of turbulent fluid flow, the stability of the solar system, the foundations of quantum mechanics and many other phenomena.