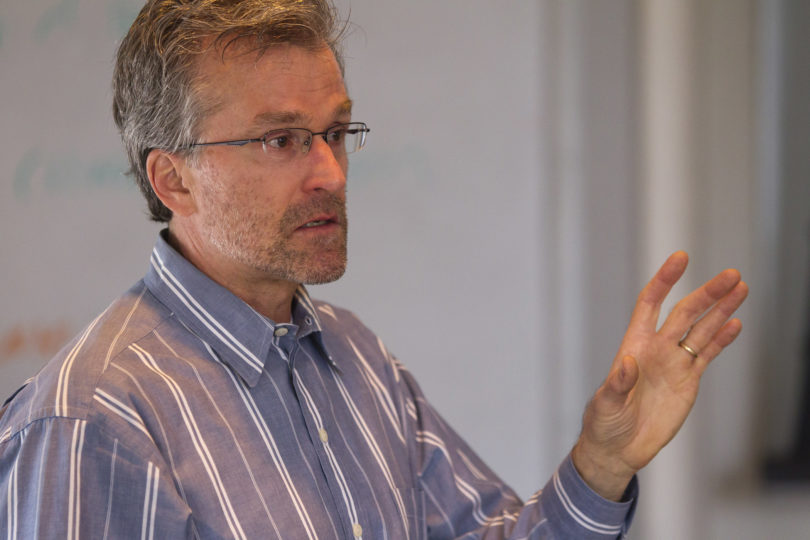 Three faculty members were named Josiah Meigs Teaching Professors April 7 at the 2014 Faculty Recognition Banquet at the Georgia Center. The professorship is the university’s highest recognition for instruction at the undergraduate and graduate levels. Meigs Professors receive a permanent salary increase of $6,000 and a one-year fund of $1,000 for academic support.

By Sarah Freeman
The decision to leave Microsoft Corp. for a career in academia is a clear indication of the passion driving James Hamilton to teach.

“As exciting as putting together a national campaign rollout under deadline can be,” Hamilton said, “it doesn’t hold a candle to having a student stick his head in my office to briefly share that his second exam score in my class was 20 points higher due to my help or seeing my Ph.D. advisee in a dissertation defense confidently fielding tough questions on the fly for an hour from other faculty on her committee.”

Hamilton delivers impressive instruction whether it is in a 300-student introductory advertising class, a 20-person “Advertising Message Strategy” course for majors or a 10-person graduate theory seminar.

“I strive to build students’ abilities so that they can become less dependent on the professor and more reliant on and confident in themselves,” said Hamilton, who also was the recipient of the Grady College 2011 Outstanding Teacher Award.

For as much passion as he delivers to his students in the classroom, his young mentees reflect praise right back.

“Dr. Hamilton expected the best from me from the first day of class,” said one former student. “His desire to find out why things are the way they are not only made for interesting discussions and papers, it also changed the way I look at the world.”

“I have Dr. Hamilton to thank for a lot,” said another alumnus. “Actually, ‘a lot’ would probably be selling him short. It’s likely closer to everything.”

In addition to his ability to “engage a crowd of 300 with ease and enthusiasm,” according to another student, Hamilton leads graduate seminars that are rigorous and effective.

Hamilton is a two-time recipient of the Roland Page Award for Excellence in Graduate Teaching (2003 and 2009), and he was the graduate adviser for the Dissertation of the Year as judged by three major scholarly organizations in the field, the only time that the same dissertation has won all three awards.

Hamilton also co-authored the textbook Alternative Journalism, which has been described by international scholars as “(a) work (that) will inform scholarly analysis of this burgeoning research field for years to come.”

His powerful effect on shaping thought processes is echoed by his students, his peers and academic leaders.

“Dr. Hamilton not only teaches his students, he inspires them to think at a higher level than ever before, and he does so while challenging them,” said Charles Davis, dean of the Grady College. “Rarely do I see such evidence of rigor matched by such evidence of appreciation. Students not only welcome Dr. Hamilton’s challenge, they have come to expect and relish it.”

“Passionate” is the word Audrey Haynes uses most often to describe her enthusiasm for learning and zeal for teaching.

“Whenever I learn something new from research I have read or generated myself, I want to share it with my students immediately and discuss it,” Haynes said. “I used to go and hunt for someone to talk to about a new finding or idea, but now I can use all kinds of tools to generate discussion-I can tweet, post, meme, you name it-and the conversation is started.”

Integrating the use of new media in her classroom, Haynes allows for an interactive learning environment in which students study the institutions and processes of politics. Encouraging her students to discuss, debate and create their own understanding of the topics moves them to extend their learning from theory to practice. Her innovative teaching style leaves her classes engaged in current events and excited to return to her lecture each week.

“I cannot speak highly enough of Dr. Haynes,” said a former student. “She is incredibly knowledgeable and does a wonderful job of stimulating interest in her class.”

Haynes has a proven track record of distinction in instruction not only within the School of Public and International Affairs and at the university, but also nationwide. She is a recipient of the university’s Richard B. Russell Award for Excellence in Undergraduate Teaching and the SPIA Excellence in Teaching Award. In 2012, she was recognized as one of the Princeton Review’s “300 best professors” in the U.S.

“Perhaps what strikes me most about Audrey is her boundless energy, which she radiates in the classroom or wherever else she is,” said Regents Professor Loch Johnson. “Audrey is a presence. This presence comes from her genuine concern for the well-being of students and a desire for them to excel while here in Athens and later in their chosen careers.”

In addition to her teaching and research, Haynes extended her accomplishments as the graduate director from 2007-2011. Her dedication to recruitment and student development has positively impacted the political science department and has greatly increased the overall quality of the graduate program.

An Online Teaching Fellow, she will teach her first online political science course this summer.

Haynes currently is working on a book project, co-authored with undergraduate research assistants Leanne Livingston and Maggie Davis, on the tea party movement and its possible impact on the Republican Party and the 2016 presidential election.

“The excitement of discovery and acquiring new knowledge generally inspires teaching,” Haynes said. “Because that is what teaching is: Sharing what you know and hoping that students will want to make those types of discoveries on their own.”

By Matt Weeks
From students to colleagues to administrators, many people agree that David Mustard’s greatest gift is his ability to inspire.

Mustard came to UGA in 1997, fresh from completing a doctorate at the University of Chicago. Almost immediately, he started to gain a reputation as both a student favorite and a tough grader-two attributes that rarely go hand-in-hand.

As one student put it: “Dr. Mustard is the kindest, most personable professor I’ve had at UGA. He is an incredible asset to the Terry College of Business. I looked forward to his class every single day, and that has never happened to me-coming from a student who didn’t make a single A on an exam.”

Over the last 12 years, Mustard has advised more than 15 student projects for the Center for Undergraduate Research Opportunities, a third of which have produced best-paper winners. These projects cover topics ranging from the economics of midwifery to the detriments of charitable giving.

Kate Vyborny, a 2008 Rhodes Scholar currently completing a doctorate in economics at England’s Oxford University, credits her scholarship to Mustard.

“David Mustard was the person who first got me interested in empirical research in economics,” she said. “I loved his research-based approach to teaching his subject material, and I am very glad to have had such a smart, motivated teacher during my undergraduate career.”

But Mustard inspires more than his students. His colleagues cite him as a gifted instructor and a peerless researcher.

“Mustard has raised the overall quality of education in the department and college in numerous ways,” said Chris Cornwell, head of the economics department. “One clear contribution was his proposal and development of a course in the economics of education, an increasingly vital area of economics research. His motivation for the course came directly from the research we started more than 10 years ago on the effects of merit-based financial aid programs.

ECON4250H quickly became a highly sought-after major elective for Honors students and has sparked more than a few to pursue their interest in education policy all the way to graduate school.”

Ron Carlson, an emeritus professor in the School of Law, said of Mustard: “Dedication to the highest level of instruction is a hallmark of Professor Mustard. He brings his first-rate intellect to bear on all of his university-related tasks, including instruction, service, writing and publishing.”

A video presentation of the Meigs Professors is at http://vimeopro.com/ugabvp/2014meigs.