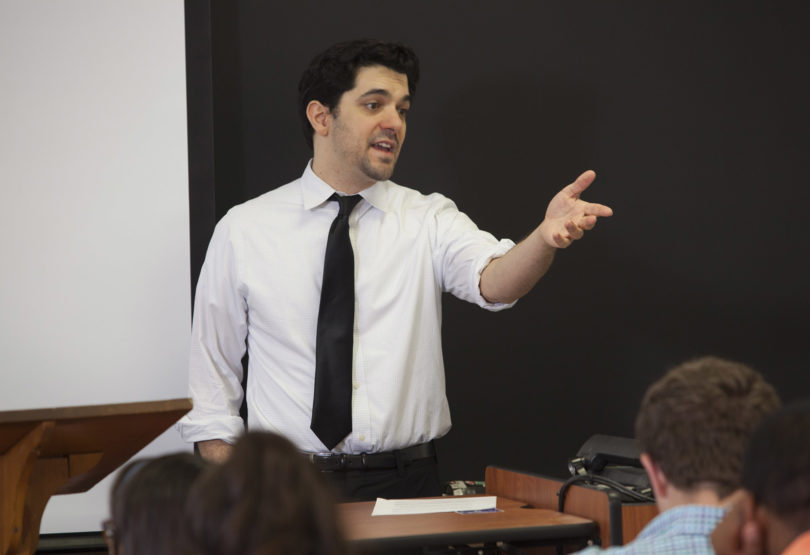 By Aaron Hale
With congressional job approval ratings below 15 percent, it is easy see that Americans are disillusioned by the political process. Anthony Madonna tries to offer undergraduates a more nuanced picture of the political landscape with its inherent compromises.

“Failing to understand these trade-offs can breed cynicism and disinterest in even the most passionate students of the discipline,” said Madonna, whose research specializes in legislative institutions and how policy is formed in Congress. He teaches both American politics classes for nonpolitical-science majors and more advanced courses for students interested in careers in the political arena.

Regardless of whether Madonna is helping students be better citizens by understanding how American politics work or preparing them to be effective leaders in Washington, D.C., his enthusiasm has been shown to engage students in his classes to get excited about politics.

“Throughout my time as an undergraduate at the University of Georgia, I never met a professor more passionate about both his work and his students than Dr.  Madonna,” said former student Melissa Siegel. “He entered every classroom with a huge smile and made every student feel welcomed and comfortable.”

Even in large classes with up to 300 students, Madonna tries to cultivate a small-classroom feel through student discussion. He often grabs students’ attention by highlighting current political events in class with video clips from The Daily Show with Jon Stewart or Saturday Night Live.

Madonna joined UGA in 2008 and quickly was recognized for his excellence in instruction by his students. The Student Government Association honored Madonna with the Teaching Arch Award in his first year at the university.

In nominating Madonna for the Russell Teaching Award, Maltese wrote, “Tony has all of the obvious qualities of a truly outstanding nominee: a strong commitment to quality teaching, an exceptional ability to engage and stimulate students and a keen intellectual preparation for quality instruction.”

Matt Baker, a 2012 political science graduate, said Madonna continues to be a mentor to former students as they begin their professional careers in politics.

“Perhaps Dr. Madonna’s most important contribution to the university community is not what takes place in the confines of the classroom, but rather in the lasting relationships he builds with his students,” Baker said.

By J. Merritt Melancon
Growing up in the suburbs of Atlanta or in a small town in Georgia’s agricultural heartland, many students come to UGA with the understanding that the world ends somewhere south of Jacksonville and west of Baton Rouge.

Maria Navarro uses her experience in international development and travel to broaden her students’ horizons beyond the familiar.

Her ability to bring the world into the classroom and encourage students to explore other cultures has won her national accolades.

Navarro came to UGA in 2005 after spending the first portion of her career working in international agricultural development in Europe, Africa, Latin America and the Middle East.

Originally from Spain, Navarro received her undergraduate degree in agricultural engineering from the Universitat Politècnica de Catalunya. She spent much of the 1990s as program coordinator for plant production at the International Center for Advanced Mediterranean Agronomic Studies.

After receiving her doctorate in agricultural education from Texas A&M University in 2004, she served as a global development intern at the Carter Center before joining the faculty at UGA. This background gives her the insight and experience to inspire students and help them understand their role in the global community. She has created service-learning and study-abroad courses while at UGA and brings both a historical perspective and an understanding of current global issues into the classroom.

Students, both in the College of Agricultural and Environmental Sciences and from other colleges and schools at UGA, routinely describe her “Reflections on Fighting Hunger” and “International Agricultural Development” courses as experiences that helped to direct their career paths.

Not only is Navarro able to explain why and how hunger persists around the world, but she also provides her students with a framework for how they can affect change and help build a more food-secure world.

“Dr. Navarro pushed me to think critically about my own life in order to understand the problems faced by so many, such as poverty and lack of education,” said Mia Catharine Mattioli, who earned a bachelor’s degree in biological engineering from UGA in 2008. “For the first time, through Dr. Navarro’s encouragement, I was able to piece together how my skills as an engineer could address these problems.”

Navarro also has helped to develop the program of study inside the relatively young Department of Agricultural Leadership, Education and Communication, said Kay Kelsey, head of the department. Navarro has worked with other young faculty to set the standard for scholarship and innovative instruction within the department.

By Mickey Montevideo
Given the density of material, engineering courses often can overwhelm students with an ongoing stream of facts before the instructor barely gets started. This information overload leaves precious little time for reflective thinking, which is even more critical to the modern engineer.

However, John Schramski combines his years of industry experience and his formal training in the ecosystem sciences to uniquely contextualize his thermodynamic engineering courses in such a way that his students want to understand the relevance and application of the material.

Schramski credits the College of Engineering’s interdisciplinary culture for initiating and fostering this environment for him and his colleagues. He also credits his belief that many traditional methods of teaching have a rich history of success and still work.

“If I successfully relate the material to the greater biosphere’s functionality or a man-made system, the instructional moment is vastly simplified around the essence of the information presented,” he said. “The teaching technology needed is minimized, and the classroom has an air of simplicity in an otherwise technology saturated modern world.”

“Dr. Schramski’s class was not the typical and dreaded thermodynamics course of a traditional engineering program,” said Clay Elliot, a former student. “Whereas, the overwhelming difficulties were there, Dr. Schramski’s methods naturally sold us on the central role of energy in the biosphere through an ongoing stream of examples from the environment and industry. Somehow, we wanted to learn thermodynamics.”

To support his classroom environment, Schramski fosters a multidimensional learning experience in which the students prod each other.

“Outside the classroom, we want students talking about research, internships, leadership positions, their projects, etc., such that they become mentors to their classmates through numerous interactions every day,” said Schramski, the faculty adviser for the Society of Environmental Engineers. “They then ponder difficult material in a far more mature way. Essentially, we need them to grow up fast. Experience has shown us that confident students can tackle complex material, and confidence building cannot be one dimensional.”

Former student Jordan Evans said, “Through one-on-one coaching sessions, (Schramski) thoroughly prepared me for job interviews and instilled in me the confidence necessary to step outside my comfort zone.”

Another former student, Tyler Smith, said, “Dr. Schramski has not only been a professor to me, but a mentor throughout graduate school and my professional career. It was his early guidance that helped me secure an international internship in Germany as a research assistant and developed my technical and modeling proficiencies. He also insisted that I present my work at an international conference.”