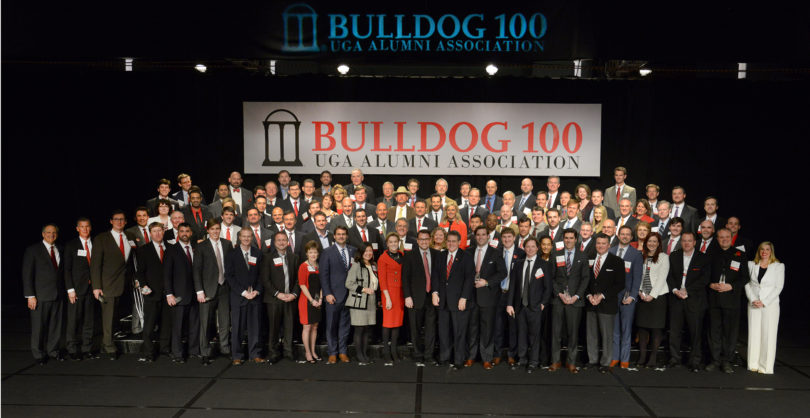 The University of Georgia Alumni Association recognized the 100 fastest-growing companies owned or operated by UGA alumni during the sixth annual Bulldog 100 Celebration Feb. 7

Athens, Ga. – The University of Georgia Alumni Association recognized the 100 fastest-growing companies owned or operated by UGA alumni during the sixth annual Bulldog 100 Celebration Feb. 7 at the Atlanta Marriott Marquis.

The 2015 fastest-growing business was Kabbage Inc., an Atlanta-based firm co-founded by 1995 UGA graduate Marc Gorlin. Kabbage pioneered the first financial services data and technology platform to provide small businesses with financing. The company uses data, such as shipping history, business volume, and social media activity, to extend short-term cash advances to small- and medium-sizes businesses online. Since Kabbage was founded in 2009, it has raised more than $100 million in venture capital. It offers more than $3 million in loans each day and employs more than 80 individuals and serves more than 20,000 customers. Gorlin is the first Grady College of Journalism and Mass Communication graduate to lead the fastest-growing business since the Bulldog 100 program began in 2010.

Nominations for the 2015 Bulldog 100 were accepted between January and May 2014. To be considered for the list, each organization must have been in business for at least five years, experienced revenues in excess of $100,000 for the calendar year 2011, and be owned or operated by a former UGA student who owns at least 50 percent of the company or be the CEO, president or managing partner. The Bulldog 100 recognizes the fastest-growing businesses regardless of size by focusing on a three-year compounded annual growth rate.

More than 450 nominations were received for the 2015 Bulldog 100. The class includes companies of all sizes, providing services and products in a variety of industries, including dentistry, law, IT, consulting, retail and pest control. Companies as far west as Texas and as far northeast as Pennsylvania, made the list this year. The average compounded annual growth rate for this year’s Bulldog 100 businesses was 47.66 percent.

The 100 businesses and the 146 alumni who lead them were recognized by the UGA Alumni Association at the event. The evening began with an optional roundtable discussion session with Bulldog 100 business owners, followed by a reception, dinner and keynote address given by 1981 UGA graduate Hala Moddelmog, president and CEO of the Metro Atlanta Chamber.

“The strength of the businesses on this year’s Bulldog 100 list illustrates the quality of a University of Georgia education,” said Meredith Gurley Johnson, UGA executive director of alumni relations. “The university prides itself on preparing the state and country’s future business leaders and the alumni who own these businesses are the result of that focus on serving the state, nation and world.”

To view the complete list of 2015 Bulldog 100 businesses, photos from the event or nominate a business for the 2016 Bulldog 100, see www.alumni.uga.edu/b100. Nominations will be accepted from Feb. 9 through June 1 at that website.