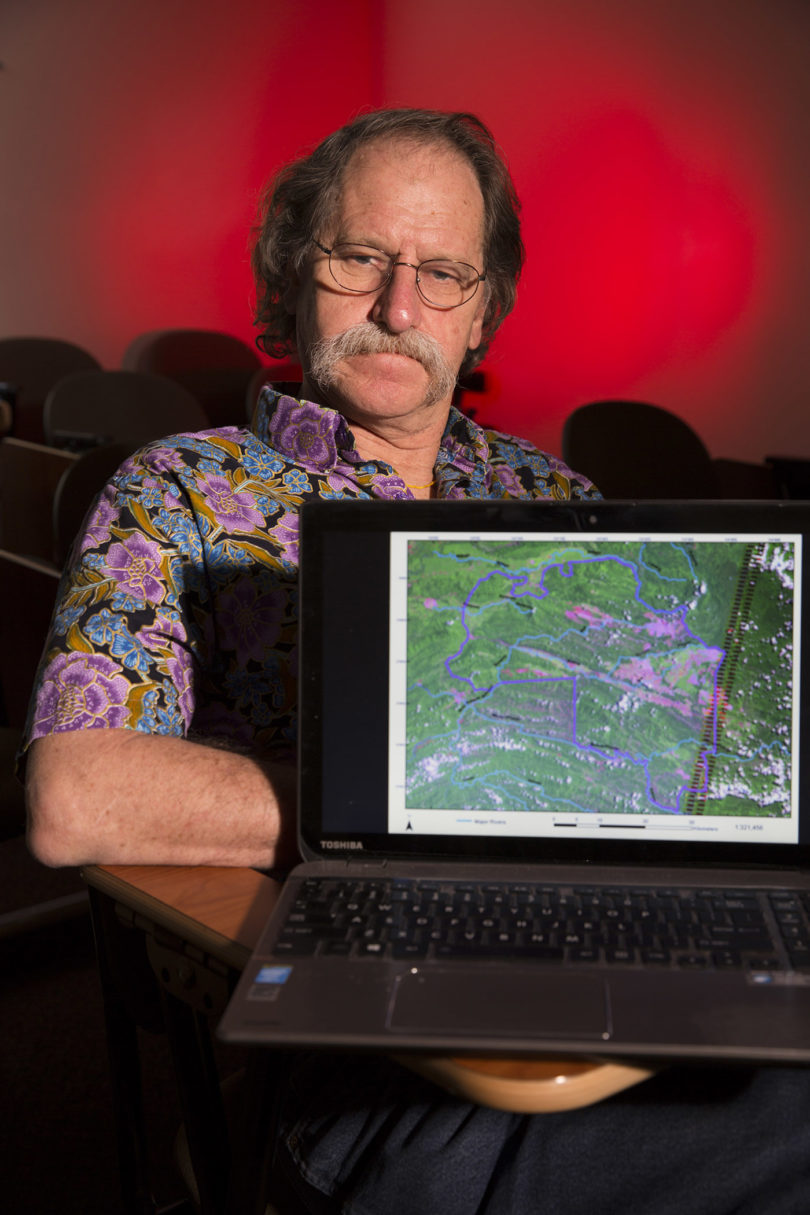 The title of Distinguished Research Professor is awarded to faculty who are recognized internationally for their original contributions to knowledge and whose work promises to foster continued creativity in their discipline.

Peter Brosius, a professor of anthropology in the Franklin College of Arts and Sciences, has been at the forefront of efforts to transform the field of environmental anthropology. He is recognized widely as an authority on the Penan hunter-gather peoples in Malaysian Borneo, and he is also a leading scholar on the political ecology of conservation.

Brosius has used his scholarly expertise to analyze the impact of environmental degradation on local and indigenous communities and to demonstrate the multiple linkages that connect those communities to global institutions and processes. He is also the founding director of UGA’s Center for Integrative and Conservation Research, which promotes interdisciplinary research collaborations that foster the evolution of the integrative approaches that make space for multiple perspectives and ways of thinking about complex trade-offs in conservation and development. Brosius and his colleagues have used this approach to examine a variety of conservation topics, including the social acceptability of bioenergy in the American South. He also continues an active research trajectory focused on the interactions between local communities, conservation and development in Malaysia and Indonesia.

Noel Fallows is associate dean of international and multidisciplinary programs and the senior professor of Spanish in the Romance languages department of Franklin College. He is also a Fellow of the Society of Antiquaries of London.

Literary critic, historian, translator and editor, Fallows is one of the foremost authorities in the world in the field of Medieval and Renaissance chivalric culture. His work focuses on Western Europe, with particular emphasis on the Iberian Peninsula. He has published a large number of influential books and articles on topics as varied as jousts, tournaments, military medicine, early equine medicine, knightly cults of wounds, propaganda campaigns, psychological warfare, mounted combat and riding techniques and arms and armor.

The clear and accessible style of his books and articles offers readers the opportunity to consider social and political questions from the past that remain powerfully resonant today, including questions of war and peace as well as the complexities of relations between Christians and Muslims. His research publications have garnered numerous international awards and have been widely acclaimed for their innovative interdisciplinary research, meticulous textual analysis and thorough cultural contextualization.

Nancy Manley, a professor of genetics in Franklin College and director of UGA’s Developmental Biology Alliance, is recognized internationally as an expert on the development, function and aging of the thymus and parathyroid organs. These areas are highly relevant to the function of the immune and endocrine systems.

Manley has carved a unique niche at the intersection of development, immunology and aging. By using molecular genetic approaches to investigate the biology of the thymus across the entire life span, she has been able to uncover fundamental principles of organ development and aging, including mechanisms regulating stability of cell fate and degeneration of the immune system with aging. These principles have particular relevance to developing therapeutic interventions aimed at improving the immune system in the elderly by rejuvenating or replacing an aged thymus.

She was recently part of a research team that was the first to grow a fully functional thymus in a living animal from transplanted cells. This discovery one day could aid in the development of laboratory-grown replacement organs, and it may form the basis of a thymus transplant for people with weakened immune systems.

Susan Mattern, a professor of history in the Franklin College, has established an outstanding national and international reputation as an expert on the history of Rome. Her first book, Rome and the Enemy, is regarded widely as one of the most important contributions to the topic of Roman imperialism and was among the first to emphasize the informal nature of Roman rule that relied more on negotiation and patronage than scholars previously had realized. Mattern’s second book, Galen and the Rhetoric of Healing, represents a major shift in her research focus. In it, she argues that medicine was inflected by Greek ways of thinking about social values such as citizenship and masculinity. Therapy, she illustrates, was both an intimate dialogue between doctor and patient and a negotiation over power in the patient’s household. Mattern continued to break new ground in her third book, The Prince of Medicine, which is the first to systematically set the prominent Greek physician Galen in his social and environmental context-the ancient Mediterranean world of infectious disease. Previously portrayed as a dogmatic pedant, Mattern argues that Galen carried on an exhausting clinical practice that included several years of battle with the Mediterranean world’s first smallpox epidemic.

Boris Striepen, Georgia Research Alliance Distinguished Investigator and a professor of cellular biology in Franklin College, has made tremendous contributions toward understanding the cell and molecular biology of human parasites. His work has focused particularly on Toxoplasma, an opportunistic pathogen that causes severe disease in patients with weakened immune systems, such as AIDS patients or organ transplant recipients. Striepen studied a novel cell component, which is required for parasite survival and an attractive target for drug development.

More recently, his laboratory has investigated the parasite Cryptosporidium. This organism is a leading cause of diarrheal disease and death in infants and toddlers around the world. Striepen and his colleagues have developed technology to genetically manipulate this organism, which up to now has been notoriously difficult to study. They are using this technology to work toward urgently needed drugs and vaccines.

His genetic analyses of various parasites also have generated a clearer picture of the evolutionary origin and fundamental composition of dangerous pathogens. Striepen views teaching and the training of young scientists as an important and most enjoyable part of his work.