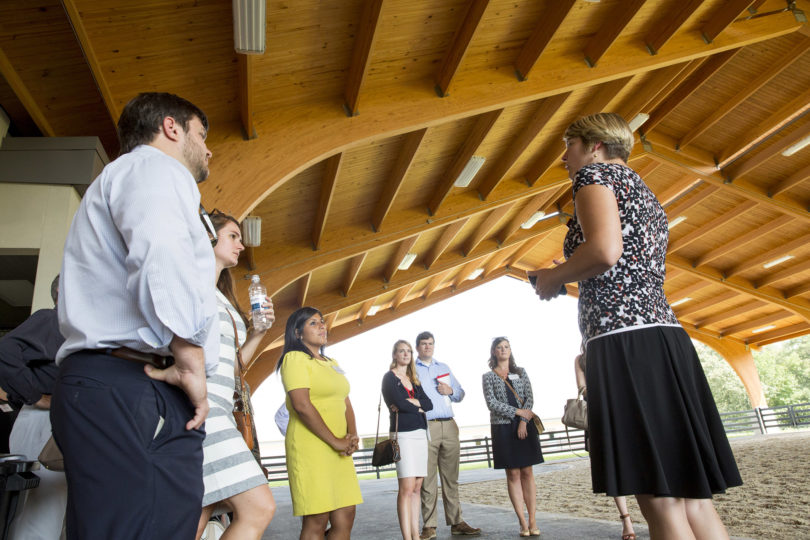 In the race for federal funding, UGA has several strong advantages, and on Aug. 20-21, more than 30 congressional legislative staffers got a firsthand look at many including UGA’s programs in veterinary medicine, infectious diseases and engineering.

“The university is proud of our outstanding students and faculty. We truly enjoy the opportunity to highlight their work and the impact they are having on our state,” said UGA President Jere W. Morehead.

In Athens as part of the annual Federal Legislative Retreat, the staffers’ footsteps echoed down intersecting hallways as they stepped into the Veterinary Teaching Hospital. Representing both Georgia senators and 12 of the state’s 14 congressional districts, they were learning how the College of Veterinary Medicine serves Georgia through animal health and disease research.

Their afternoon was packed. The staffers had just come from an engineering session on transitioning research into industry technology, led by Don Leo, dean of the College of Engineering, and were stepping off a UGA bus after a 3.8-mile ride from campus.

“When you see how much of an impact our students are making in engineering, it’s just incredible,” said Arthur Tripp, who graduated from UGA with a degree in political science in 2009 and serves as Rep. David Scott’s senior policy adviser.

“What I hope to take back is the message that we need to continue to uplift not only our engineering school but all of our schools,” he said. “Funding is a huge part, I think, of why we’re here, of what we can provide.”

Dr. Nicole Northrup led Tripp and other staffers through the College of Veterinary Medicine’s newest facility. As the service chief for outpatient medicine and an associate professor of oncology, she is part of a team that conducts clinical trials on new cancer therapies. Animals are only included in trials with the informed consent of their owners.

“The types of cancer we diagnose in dogs are similar to those in people,” she told the staffers after they moved in waves through the hospital. UGA is part of the national Comparative Oncology Trials Consortium, and what they learn about treating dogs can help not only canines but also potentially translate into helping humans with cancer.

In one of the college’s fastest-growing departments—infectious diseases—researchers are studying ways to prevent and treat both humans and animals. One professor in particular—Biao He—is using a virus common in dogs, known as parainfluenza virus 5, as a way to safely deliver vaccines to humans.

“We’re taking a virus from human’s best friend, the dog, that’s harmless to humans, and we’re re-engineering it and using it in humans to train our bodies to recognize certain antigens,” said He, who is a Georgia Research Alliance Distinguished Investigator.

He’s lab is researching PIV5’s use in vaccines for diseases such as rabies, HIV, influenza, tuberculosis and malaria, and as a novel anti-cancer therapy. His colleague, Ted Ross, who joined the UGA faculty in August as a Georgia Research Alliance Eminent Scholar, is working to develop a flu vaccine that will last a lifetime, instead of a year.

“Flu affects people all year long,” said Ross, whose research focuses on designing, developing and testing vaccines for viral diseases. “There’s a constant level of flu mortality. Our goal is to find a better way to vaccinate people.”

The Veterinary Medical Center tour and presentations were two of the many sessions the legislative staffers attended during their day and a half on campus.

They also heard an overview of UGA’s research from Pamela Whitten, senior vice president for academic affairs and provost; toured the Richard B. Russell Library for Political Research and Studies with director Sheryl Vogt; discussed climate and weather with professor Marshall Shepherd, director of the Atmospheric Sciences Program; learned more about research being conducted at the Complex Carbohydrate Research Center and promoted through UGA’s Innovation Gateway from directors Alan Darvill of the CCRC and Derek Eberhart of Innovation Gateway; and toured Carrier Transicold with Dean Leo.

“The University of Georgia appreciates the strong and consistent support we receive from the staff members of the Georgia delegation in Washington, D.C.,” Morehead said. “Without their support and assistance, the key functions of this institution would be adversely impacted.”

“This annual event is an opportunity to demonstrate UGA’s faithful stewardship of federal research dollars and our service to Georgians and our nation,” said Andrew Dill, UGA’s director of federal relations. “This is a unique opportunity to showcase the great work of our faculty to the leaders of our congressional delegation.”

Staffers meet with 30-plus people daily as they serve their legislator’s congressional district. For Dill, who works daily with UGA faculty members traveling to Washington, D.C., hosting legislative staff in Athens makes his job easier.

“To see the growth that’s continuing to happen at UGA is really incredible,” said Virginia Dent, who graduated from UGA in 2011 and is now communications director for Rep. Rick Allen. UGA has a great impact “on the state, outside of an academic perspective. To find out it has a $4 billion impact on the economy is really eye opening. That over 500 products were put on the market as a result of UGA research—the research aspect, too, is really, really impressive and really incredible.”