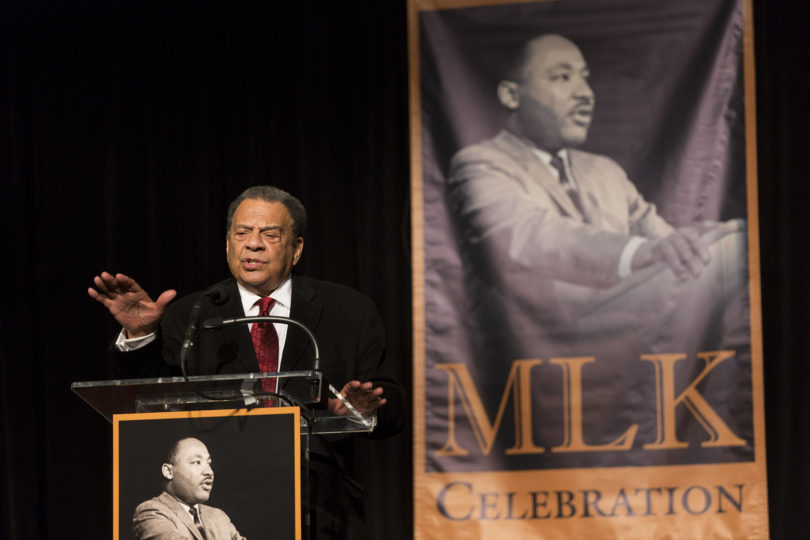 Martin Luther King Jr. became the transcendent civil rights leader who broke down barriers for equality in America because of the “spiritual” way he looked at the world.

That was the message from Andrew Young, former mayor of Atlanta and former U.S. ambassador to the U.N., during the 12th annual Martin Luther King Jr. Freedom Breakfast Jan. 23.

By spiritual, Young said, he meant that King believed in divine miracles that overcame seemingly insurmountable obstacles such as the path to passing voting rights legislation in the 1960s.

Sponsored by UGA, the Athens-Clarke County Unified Government and the Clarke County School District, the MLK Freedom Breakfast commemorates the life of the late civil rights leader. The event, which was held in the Grand Hall of the Tate Student Center, had a capacity crowd with more than 600 people in attendance.

Young, who was a strategist and negotiator with King during the civil rights campaigns in Birmingham and Selma, delivered an inspiring keynote address about continuing King’s work.

“We believe that Dr. King’s message to redeem the soul of America from the triple evils of racism, war and poverty is not only possible but necessary,” Young said.

During his address, Young recalled a meeting he had with King and President Lyndon Johnson at the White House to discuss a push for voting rights legislation in 1965.

According to Young, the president said that while he badly wanted a voting rights law, he didn’t have the political power at that time to get a bill through Congress.

When the civil rights leaders left the White House that night, King told Young, “I think we have got to find a way to get the president some power.”

At the time, Young thought King’s statement was either crazy or arrogant.

But that meeting inspired the King-led march on Selma, which changed the landscape for voting rights. Young said he learned something from King.

“I was like President Johnson,” said Young. “I was thinking politically. (King) had a spiritual view of the world.”

In the present day, Young said fulfilling King’s dream is less about racial issues and more about closing class divisions and finding economic opportunities. Investing in education and training police is one way to address these concerns.

Young said an old friend once told him, “If you think education is expensive, just look at the cost of ignorance.”

Ricky Roberts, an academic adviser in the UGA Honors Program; Charles King, a senior education major from Atlanta; Lemuel “Life” LaRoche, founder of the Chess and Community Conference, Inc.; and Joan Prittie, executive director of Project Safe Inc., received the President’s Fulfilling the Dream Award for significant efforts to build bridges of unity and understanding as they strive to make King’s dream of equality and justice a reality.

The Martin Luther King Jr. Freedom Breakfast and the President’s Fulfilling the Dream Awards are spearheaded by the UGA Office of Institutional Diversity.