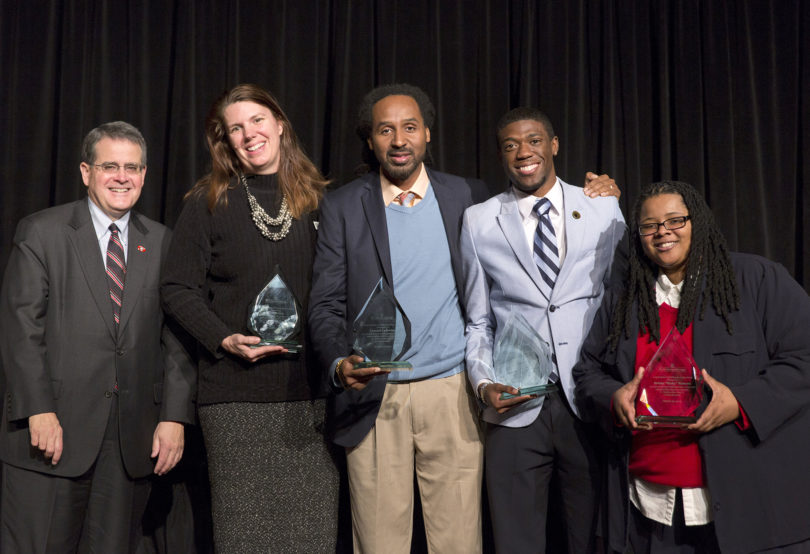 The breakfast commemorates the life of the late civil rights leader. Held at the Grand Hall of the Tate Student Center, the event had a capacity crowd with more than 600 people in attendance.

Ricky Roberts, an academic adviser in the UGA Honors Program; Charles King, a senior education major at UGA; Lemuel “Life” LaRoche, founder of Chess and Community Conference Inc.; and Joan Prittie, executive director of Project Safe Inc. received the President’s Fulfilling the Dream Award for significant efforts to build bridges of unity and understanding as they strive to make King’s dream of equality and justice a reality.

Roberts, an academic adviser in the Honors Program, was honored for her efforts working for fairness and equality for all. She is actively involved in several local organizations that promote equality for the lesbian, gay, bisexual and transgender population, and she wrote the original proposal for domestic partner benefits at UGA, which was passed by the University Council in 2012. She is a board member for Georgia Equality, Athens Pride, the Common Ground LGBT Community Center and UGA’s Black Faculty and Staff Organization.

King is president of the student organization Black Male Leadership Society, which he helped to revive after years of dormancy on campus. He’s worked with faculty, staff and Athens community leaders to create an organization that embraces UGA’s black undergraduate and graduate students while setting them up for success in their academic, social, personal and professional lives. Key accomplishments under his leadership last fall included a candlelight vigil in response to the Michael Brown shooting, a record number of members inducted at the group’s first formal pinning ceremony and ongoing community service with Athens Clarke-County Youth Academy. King also works as a campus recruiter with Teach For America.

Prittie is the executive director of Project Safe Inc., a nonprofit working to end domestic violence through crisis intervention, ongoing supportive services, systems change advocacy and prevention and education. Prittie advocates for laws that will help victims and hold perpetrators accountable. She also has served as chair of the Georgia Coalition Against Domestic Violence, chair of the DHR State Advisory Committee on Domestic Violence and co-chair of the Domestic Violence Task Force of Athens-Clarke and Oconee counties. She has served on the board of directors for the Athens Area Humane Society, Athens Nurses’ Clinic, United Way of Northeast Georgia and recently joined the board of Books for Keeps. She’s been an adjunct instructor at UGA since 2008, first in public administration in the School of Public and International Affairs and now in social work.

Ambassador Andrew Young, the former mayor of Atlanta, was the keynote speaker for event. Young, who was a strategist and negotiator with King during the civil rights campaigns in Birmingham and Selma, recalled his experience with the civil rights leader.

“Ultimately, he (King) believed that all humans beings had a streak of decency that could be brought forth if you treated them with respect and decency,” Young said.