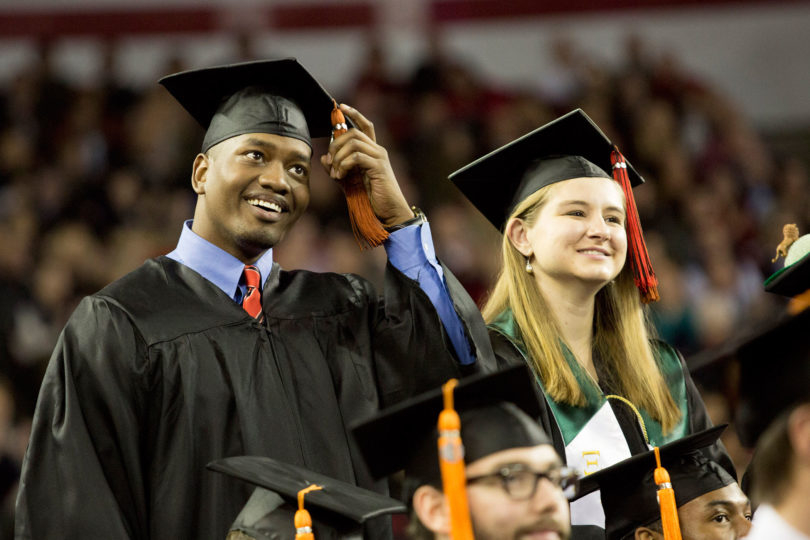 The new UGA alumni are in a privileged position to make an impact on not just their communities but on the nation and the world, but it is up to them to take advantage of that opportunity, according to the speakers at the ceremonies.

Jon Meacham, a journalist and Pulitzer Prize-winning biographer, addressed the 1,649 graduating students at the undergraduate ­ceremony, telling them to look to the past when feeling anxious about the political climate in the U.S.

“History does have the capacity to bring us together,” he said, “for the story of the American journey is ultimately the story of obstacles overcome, crises resolved, freedom expanded and strength enduring.”

This election cycle has been described as one of the most vitriolic in modern times, but America is a nation founded amid fear and anxiety, a nation of “perpetual crisis and provisional consensus,” Meacham said.

Despairing over the future of the nation is nothing new, he said, citing Patrick Henry’s declaration in 1788 that the new American republic was in extreme danger of dissolution. Concern about the future is “not entirely unique” to modern day.

Describing compromise as the “oxygen of democracy,” Meacham encouraged the graduates to remember that diversity of thought and of people makes the nation strong.

“The point of a republic, the point of the world you’re inheriting, is the preservation, not necessarily the resolution, of differences of opinion,” he said. “We have always grown stronger the wider we’ve opened our arms and the more we’ve opened our hearts.”

Meacham advised students to be curious, graceful and hopeful; to love their neighbors; and to vote in every election. He also offered some less conventional advice for a graduation speaker, suggesting they read detective novels, try to look up from the screens of their electronic devices every now and again and subscribe to magazines and buy hardcover books.

Tonya H. Cornileus, vice president of learning and organizational development at ESPN, echoed the sentiment of privilege to 1,108 graduate students and guests during the graduate ceremony. The UGA alumna, who earned her doctorate in adult education/human resources in 2010 and her master’s in human resources and organizational development in 2004, told degree candidates that she feels privileged to have earned her degrees from the University of Georgia and reminded them of how privileged they are for the same reason.

“I start with that truth, graduates,” she said. “The truth is, you are special, and this is a big moment. Let us not underestimate what you have accomplished here. Attaining your graduate degree says something quite magnificent about who you are.”

Cornileus challenged graduates to consider what it means to be privileged and to rise up and ask, “What now?”

She reminded students that their education can benefit their community and that they have a responsibility to give back to the world, telling them that she’s sure they will recognize various needs.

The crowd at the graduate ceremony included many family and friends, including Lance Cpl. John Michael Robinette, who surprised his mother, Michelle Robinette, moments after she received her doctorate in language and literacy education.