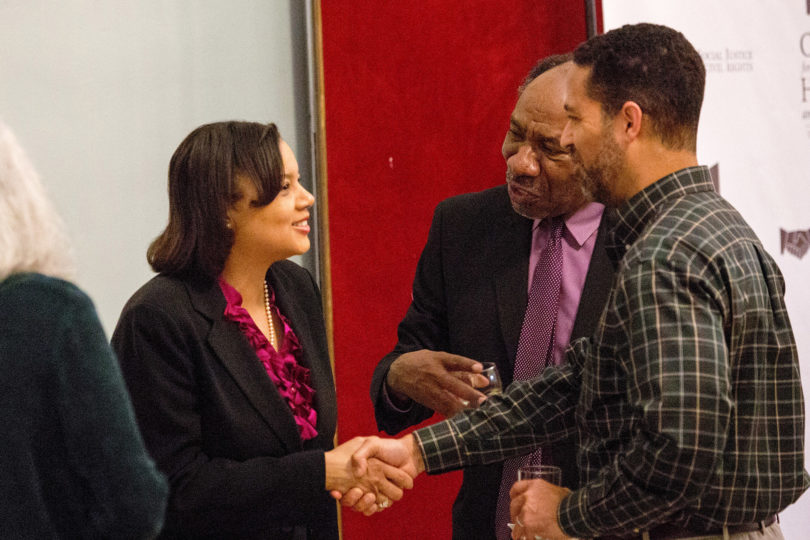 When 15-year-old Constance Baker Motley told her parents that she wanted to be a lawyer, her mother advised her to become a hairdresser instead. Her father said nothing. Even if college wasn’t beyond the means of their large, poor family, it was extremely unlikely in the 1930s that a black female could gain admission to law school.

And yet she did. With the help of a philanthropist, Motley not only entered Columbia University Law School, but went on to become one of America’s most successful civil rights litigators and a distinguished federal judge.

“She lived a paradox of change,” Harvard law and history professor Tomiko Brown-Nagin told attendees March 17 at the fourth annual Donald L. Hollowell Lecture. Brown-Nagin is the author of many articles on civil rights history as well as the book Courage to Dissent: Atlanta and the Long History of the Civil Rights Movement, which won the 2012 Bancroft Prize in American History. She currently is working on a biography of Motley.

The Hollowell Lecture is named for Georgia’s late chief civil rights attorney during the 1950s and 1960s. Hollowell served as chief counsel in the Holmes v. Danner case that led to the desegregation of UGA in 1961. Motley was a member of the legal team on that case.

Motley’s life could have gone in a very different direction, though. After earning a law degree in 1946, she initially sought employment with financial corporations in New York, but no one would hire the young, black woman.

Motley accepted a job with the NAACP Legal Defense and Educational Fund and went on to win nine out of 10 cases before the U.S. Supreme Court as well as many landmark desegregation lawsuits throughout the South.

Despite her successes, she still encountered bias. After nearly two decades with the LDF, Motley was bypassed for its leadership in favor of a male lawyer. The choice stung, but she moved on.

“Motley didn’t call herself a feminist. She played the inside game,” Brown-Nagin said.

After being named the nation’s first black, female federal judge in 1966, Motley continued to weigh in on issues of discrimination until her death in 2005. As a judge she ruled for female reporters’ right to enter professional male athletes’ locker rooms to conduct interviews, and she argued for more diversity in the judiciary.

One shouldn’t look at Motley’s career as the only way to frame success, however, added Brown-Nagin. Litigation in the South took her away from her husband and children for extended periods of time and exposed her to great personal danger.

“It is so important to appreciate that there are many paths to the mountaintop,” Brown-Nagin said.

After the lecture, Brown-Nagin and Cornelius took questions from the audience. Several questions concerned issues of gender bias and how to create a more inclusive society.

“This lecture is part of the center’s commitment to foster in-depth conversations regarding human and civil rights,” Cornelius said. “I look forward to more conversations like this, which can inspire future research, scholarship and community engagement.”