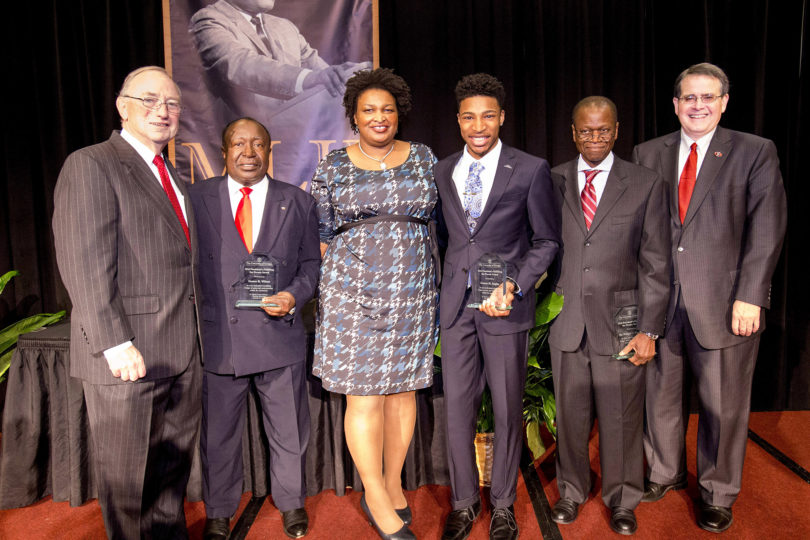 The breakfast commemorates the life of the late civil rights leader. Held at the Grand Hall of the Tate Student Center, the event had a capacity crowd with more than 600 people in attendance

William Kisaalita, a professor in the College of Engineering; Homer Wilson, owner of Wilson’s Styling Shop; and Darren Anglin, a senior from Covington, received the President’s Fulfilling the Dream Award for significant efforts to build bridges of unity and understanding as they strive to make King’s dream of equality and justice a reality. The late Richard M. Graham, the first full-time African-American faculty member at UGA, was also recognized at the breakfast. Graham died in May.

Kisaalita is the faculty mentor for Engineers without Borders, the National Society for Black Engineers and the Peach State Louis Stokes Alliance for Minority Participation. He serves meals at a local soup kitchen, Our Daily Bread, and invites freshmen in his Odyssey Seminar to participate. Through his church, he works with Meals on Wheels and Project Safe. Kisaalita, who was born in Uganda, developed a milk cooler designed to help dairy farmers, particularly those in sub-Saharan Africa who lack access to refrigeration. The coolers decrease milk spoilage thereby increasing production and profits. His goal is to increase income among those earning less than $5 a day.

Wilson owns Wilson’s Styling Shop, a barbershop formerly owned by his father. In the early 1960s, when black students from Athens High and Industrial School organized a sit-in campaign to integrate downtown lunch counters, the barbershop became a site of both moral and financial support. As a teenager, Wilson helped serve food and drinks to his friends, foot soldiers in the movement for civil rights in Athens. Wilson and his father founded the Hot Corner Association in 2000. For the past several years, their nonprofit has organized the Hot Corner Festival. Wilson and the Hot Corner Association have also created educational scholarships for local students.

Anglin is senior majoring advertising with a minor in consumer economics and communications. He is a mentor for the Black Educational Support Team, vice president of finance for the National Pan Hellenic Council and vice president for the Zeta Nu Chapter of Phi Beta Sigma fraternity. He’s active with the UGA chapter of NAACP. He mentors more than 20 Athens-Clarke County middle and high school students in the Sigma Beta Club. He created a temporary organization to raise $1,000 in scholarships for local minority students. In July, he will begin work for Allstate as a part of its Leadership Development Program.

A tribute to Graham was also made at the breakfast. Graham was a former director of the Hugh Hodgson School of Music, which is part of the university’s Franklin College of Arts and Sciences. He joined the UGA faculty in 1968 where he taught music education and music therapy at the Hodgson School. He retired from the university in 2000.

In her address, Abrams talked about the slow but steady progress, “one step at a time,” toward equality and justice in America pushed forward by King and other civil rights advocates.

“The constant demand of progress is yoked to patience that is a profound calling,” Adams said. “The power of our dreams requires constant action-a constant movement forward.”