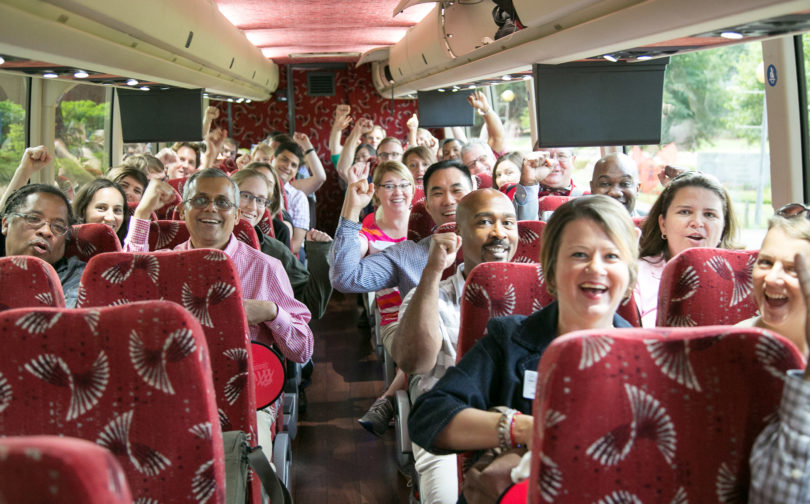 Before leaving for a five-day tour of Georgia

Starting with a lesson on the growing agritourism industry at Jaemor Farms near Gainesville to hearing about the state’s first oyster hatchery at UGA Marine Extension and Georgia Sea Grant in Savannah, 36 new faculty from 13 schools and colleges saw the economic engines that drive the state during the 2016 New Faculty Tour.

At the State Capitol in Atlanta, the faculty members got a crash course in Georgia politics from Georgia House Speaker David Ralston, who talked about the changing demographics of the state and how that could affect voting patterns in coming years.

In Senoia, where The Walking Dead television series is filmed, tour participants were surprised to see “walkers” wandering the streets downtown and stunned when people stepped into the street and killed the zombies. Actors from Georgia Tours, who offer walking tours of Senoia to visitors, provided the drama.

In West Point the faculty members visited Kia Motors, the automotive company’s first North American plant, where an assembly line of robots assemble Sorentos, Optimas and Sedonas among other models of Kia cars as well as some Hyundai models.

Roosevelt’s Little White House in Warm Springs, the Carnegie Library in Americus, the UGA campus in Tifton and the CSX Rice Yard, the largest train transfer station in the Southeast, in Waycross, were among the stops where new faculty learned about the economy, culture, history and people of Georgia.

Scott Nelson, a UGA Athletics Association Professor of History, appreciated the history of the Little White House, built as a retreat for President Franklin Delano Roosevelt. Roosevelt first visited Warm Springs in 1924 when he traveled there to see if the natural warm mineral springs would help his polio-related paralysis. Roosevelt died at the house on April 12, 1945, while sitting for a portrait, which was later completed and is displayed at the site.

“I knew that it was in the South but I didn’t realize it was in Warm Springs, Georgia,” Nelson said. “It was fascinating to see it.”

On the last evening of the five-day tour, faculty members visited the Savannah base for UGA Marine Extension and Georgia Sea Grant, where they went out on a trawl in the Skidaway River and learned about the key drivers of the coastal economy: shrimp, jelly balls, freeze-dried at a nearby processing plant and shipped to Asia, where they are a culinary delicacy, blue crabs and clams.

On the way back to Athens, the bus stopped in Sandersville, where faculty members learned about the Archway Partnership, another public service and outreach unit, and kaolin, a white, alumina-silicate clay used in hundreds of products, including paper and cosmetics. Sandersville, in Washington County, is known as “the Kaolin Capital of the World.”

“Not being a Georgia native, I’ve learned a lot about Georgia and what it has to offer,” said new faculty member Jennifer Tucker, an assistant professor of animal and dairy science in the College of Agricultural and Environmental Sciences. “I have learned a lot of interesting things and areas that I would like to go back and visit at some point.”

The New Faculty Tour was launched in 1977 after the Georgia business community indicated it wanted to see more understanding and collaboration between Georgia industry and higher education. More than 1,400 UGA faculty members have made the tour, which has been held all but seven years since it first began. Those years—1991, 2003-2004 and 2009-2012—tours were canceled because of budget constraints.