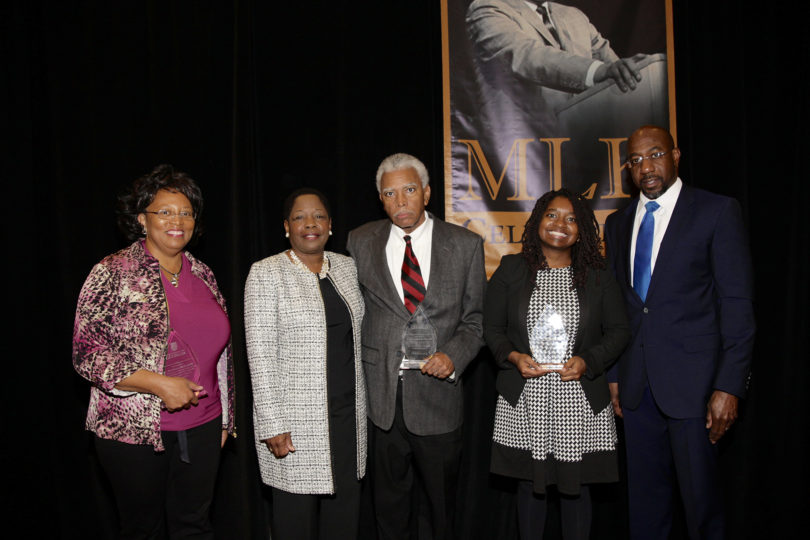 The breakfast commemorates the life of the late civil rights leader. Held at the Grand Hall of the Tate Student Center, the event had a capacity crowd with more than 600 people in attendance

Elizabeth Louis, a doctoral candidate in psychology; Barbara McCaskill, professor of English and co-director of the Civil Rights Digital Library Initiative; and Fred O. Smith and Lee E. Zimmerman Smith, co-founders of the Creative Visions Foundation, received the President’s Fulfilling the Dream Award for their efforts to make King’s dream of equality and justice a reality.

Louis works as graduate assistant in UGA’s Office of Institutional Diversity, where she provides support for the Diversity and Inclusion Certificate program, the Dialogues in Diversity Lunch Series and the Count Me In survey, among other initiatives. Her research interests include ethnic minority and immigrant mental health and trauma; the influence of culture, religion and spirituality in coping with traumatic experiences; and disaster mental health and humanitarian psychosocial interventions.

McCaskill, who has been on the UGA faculty for 25 years, helped develop and implement the English department’s multicultural American literature curriculum. She has published four books and scores of essays and book chapters on African-American literature and literary subjects. In the Athens community, she has taught classes about the literature and film of the civil rights movement for UGA’s Osher Lifelong Learning Institute. She also has participated in related programming at the Athens-Clarke County Library, the Morton Theatre and with Athens area youth through the Experience UGA program.

The Smiths have been active in many organizations, including Habitat for Humanity, the Athens Tutor Program, Boy Scouts of America, Citizens for Better Government, the Economic Justice Committee and the Athens-Clarke chapter of the NAACP. In 1989, they started the Creative Visions Foundation, a community based nonprofit organization that provided after school, weekend and summer educational enrichment to Athens area youth. In 2012, they created the first Athens Area Black History Bowl, aimed at connecting youth to their history through questions specifically about local and regional African-American history.

In addition, Kerry Miller, Mary Diallo and Harold Black, the first African-Americans to enroll at UGA as freshmen, were present at the breakfast and were recognized on the 50th anniversary of their graduation as part of the Class of 1966.

The Rev. Raphael Gamaliel Warnock, senior pastor of the historic Ebenezer Baptist Church in Atlanta, was the featured speaker at the event. He encouraged attendees to take on King’s unfinished work.

“Dr. King loved Schubert’s unfinished symphony. It is a classic, but unlike most symphonies, it only has two movements,” Warnock said. “If you think about it, all of our lives are like an unfinished symphony. We die with a project unfinished. While we celebrate his work, let us not cash in the dream for sentimental memories. He understood that this work builds one block upon another.”

Warnock reiterated the importance of investing in people, particularly children, calling them “the most important resource we could ever have.”

Warnock ended by saying that when he gets discouraged, one might imagine he looks up, “and the truth is, when I look up, most of the time all I see is birds.” He said that he especially likes to see geese and the way they fly in formation and go further together. The bird out front works the hardest, but when that bird gets tired, it moves a new position because “geese understand that my individual location is not as important as our collective destination.”

The Martin Luther King Jr. Freedom Breakfast and the President’s Fulfilling the Dream Awards are coordinated by the UGA Office of Institutional Diversity.