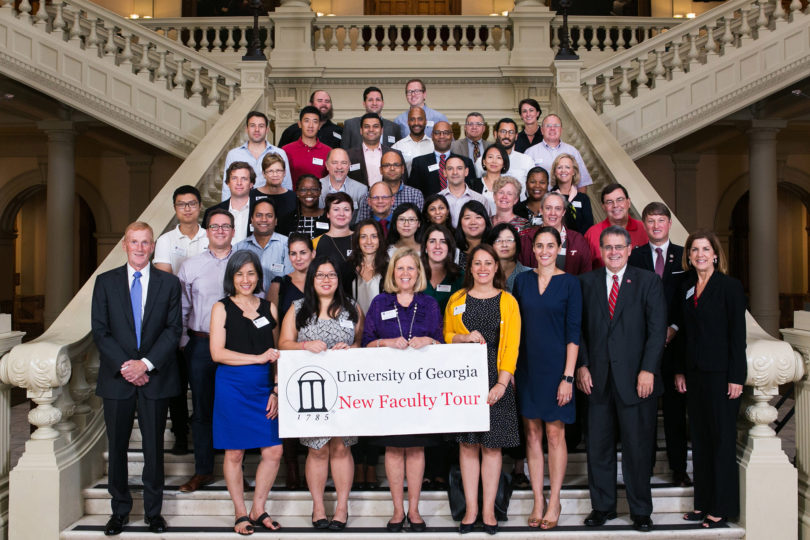 During a stop in Atlanta

Thirty-nine new faculty members spent five days on the road the week before the fall semester began, traveling from the mountains to the coast to see firsthand the economic engines that drive the state of Georgia.

Agriculture and agritourism highlighted the first day, as the tour stopped at Jaemor Farms near Gainesville, Wolf Mountain Winery in Dahlonega and Amicalola Falls State Park in Dawsonville, where the group spent the first night.

“I wouldn’t come to these places on my own, at least initially, because I’m new to Georgia,” said Ruchi Singh, an assistant professor in the department of legal studies and real estate at the Terry College of Business. “This is really interesting and an awesome experience. You get to learn so much that you wouldn’t have experienced otherwise.”

In Atlanta, the tour stopped at the state Capitol to learn about the Georgia General Assembly and then walked to the University System of Georgia offices to sit in on part of a board of regents meeting.

Over the week, the faculty passed through 43 of Georgia’s 159 counties and 14 cities, stopping at the National Center for Civil and Human Rights in Atlanta; in downtown Senoia, where The Walking Dead is filmed; the Georgia Public Safety Training Center in Forsyth; Robins Air Force Base in Warner Robins; the Okefenokee Swamp in Waycross; and Gulfstream Aerospace and the Georgia Ports Authority in Savannah.

The tour also included stops at the UGA Griffin and Tifton campuses and at UGA Marine Extension and Georgia Sea Grant and the Wormsloe Institute for Environmental History, both in Savannah.

At Marine Extension and Georgia Sea Grant, the faculty members went on trawls aboard the R/V Georgia Bulldog and R/V Sea Dawg, toured the UGA Aquarium and had their pictures taken with Uga X, the Georgia Bulldogs football mascot.

At each stop, faculty members on the tour—most of whom are not from Georgia—saw or heard something that helped them better understand Georgia’s geography, history, culture or economic drivers.

“We’ve seen just how important the University of Georgia is as far as supporting the state through the land-grant mission,” said Joseph Watson Jr., the inaugural Carolyn Caudell Tieger Professor of Public Affairs in the Grady College of Journalism and Mass Communication. “We’re doing our part to make sure the state does its part to make sure this is a wonderful and prosperous place for Georgians to live.”

In addition, the tour provided an opportunity for faculty from different disciplines to meet and explore possible connections between their areas of expertise.

“I had a chance to learn a little bit more about the people I’ll be working with across campus,” said Barry Croom, an associate professor of agricultural leadership, education and communication in the College of Agricultural and Environmental Sciences. “It also helped me develop a few partnerships. This morning I was talking to a couple of my colleagues and perhaps we can discover some research together. That’s what UGA wants us to do, and that’s what we’re going to do.”

Photos from the tour are at https://www.instagram.com/uga_serves/.