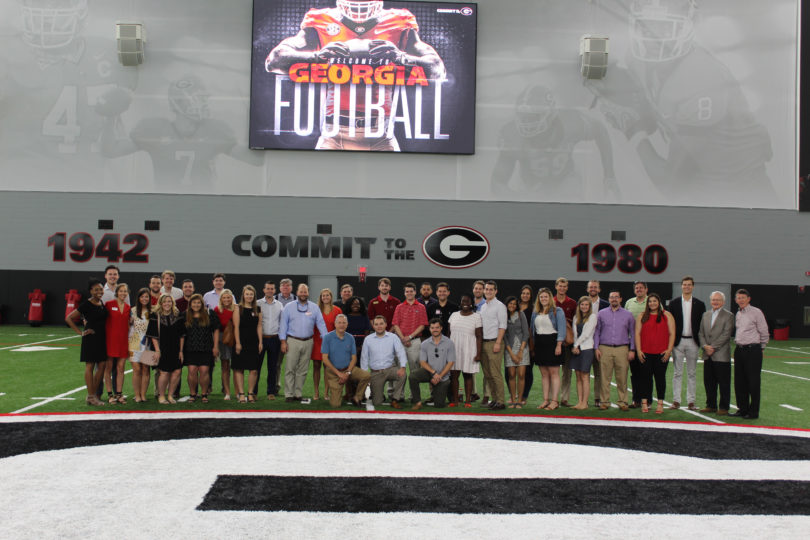 After receiving an overview of the university’s growing research enterprise from Vice President for Research David Lee, staffers visited a number of sites across campus that featured innovative and wide-ranging research conducted at UGA. They toured the Regenerative Bioscience Center and learned about associate professor Franklin West’s translational stroke and traumatic brain injury research. In addition, Jason Locklin, director of the New Materials Institute, demonstrated how his research is creating sustainable products and reducing global waste, such as plastics.

The retreat also took staffers to the Institute for Disaster Management, a state-of-the-art emergency operations center, lab and workspace that supports the training and research of students, faculty and other disaster management practitioners from around the world. The session, led by University Professor Cham Dallas, showed staffers how the institute helps more than 140 hospitals, 100 long-term care facilities and 500 community partners across Georgia develop emergency response plans to disaster risks.

Federal staff members also learned about UGA’s plans for the future of its research enterprise. Kyle Tschepikow, assistant to the president, shared how work by the president’s Innovation Task Force will advance the university’s land-grant mission as well as the community and state’s innovation ecosystem (see story). Staffers also visited the Indoor Athletic Facility and heard from head football coach Kirby Smart.

The retreat, held annually during the congressional recess in August, allows UGA to showcase the university’s academic and public service initiatives, research advances and institutional priorities to federal staffers. This year’s retreat was held Aug. 16-17.

“These retreats are a great way for folks at the federal level—like me—to see firsthand what our investments can do to not only put Georgia at the forefront for innovative technology but also to advance our nation in that sphere as a whole,” said Nick Scoufaras, a legislative assistant to U.S. Rep. Rob Woodall.