Three faculty members were honored as Meigs Professors at the 2018 Faculty Recognition Banquet. The professorship is the university’s highest recognition for instruction at the undergraduate and graduate levels. Meigs Professors receive a permanent salary increase of $6,000 and a one-year fund of $1,000 for academic support. 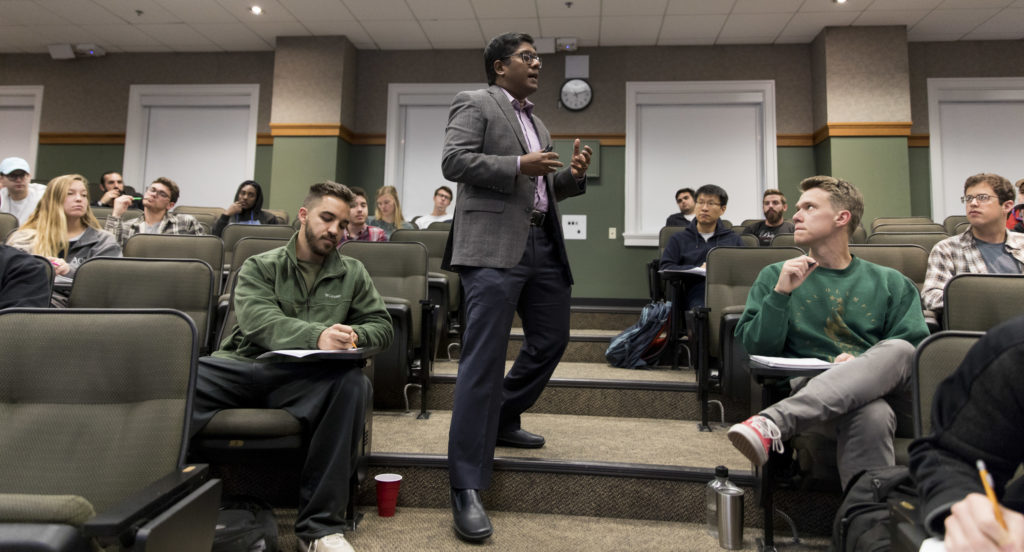 Santanu Chatterjee’s teaching style has proven to be engaging for students whether the courses are introductory or at the graduate level. His former students have praised him for his versatility in the classroom.

“He brings in personal experiences to give useful, interesting and often entertaining insights to the material,” said one student about Chatterjee’s Growth and Development course. “Thanks to his style of teaching, the amount of class involvement and discussion in this class has been much higher than any other Terry class I’ve been in.”

Chatterjee’s work extends far beyond what is expected of him.

Former student Mark Kelly said the professor pushed him to continue his studies in macroeconomics and set aside time for him when he needed extra help.

“Despite his busy teaching schedule and additional responsibilities as the department’s graduate coordinator, Dr. Chatterjee offered to meet with me one-on-one for a yearlong independent study of growth theory,” Kelly said.

Chatterjee’s work also has helped students who have graduated and started their careers.

A faculty member at UGA for 16 years, Chatterjee has taught more than 10 courses in four academic programs, including study abroad programs in Costa Rica, China and Peru. He also has had a large role in the curriculum and program development for both undergraduates and doctoral students at the university.

Additionally, Chatterjee has served as the director of the Full-Time MBA program since August 2014 and has helped to create new dual degree programs with the College of Engineering, the School of Law, the College of Pharmacy and a 2+2 deferred MBA program for UGA undergraduates.

He also has overseen the development of two new graduate programs that will launch in fall 2018: the Master of Science in Business Analytics and a one-year MBA for STEM undergraduates at UGA. These programs promote interdisciplinary education and graduate enrollment at the university.

These boards currently are working with Terry faculty members to make the MBA program’s curriculum more market driven and improve the student experience, both in and out of the classroom, as well as expand employment opportunities for students in the program. 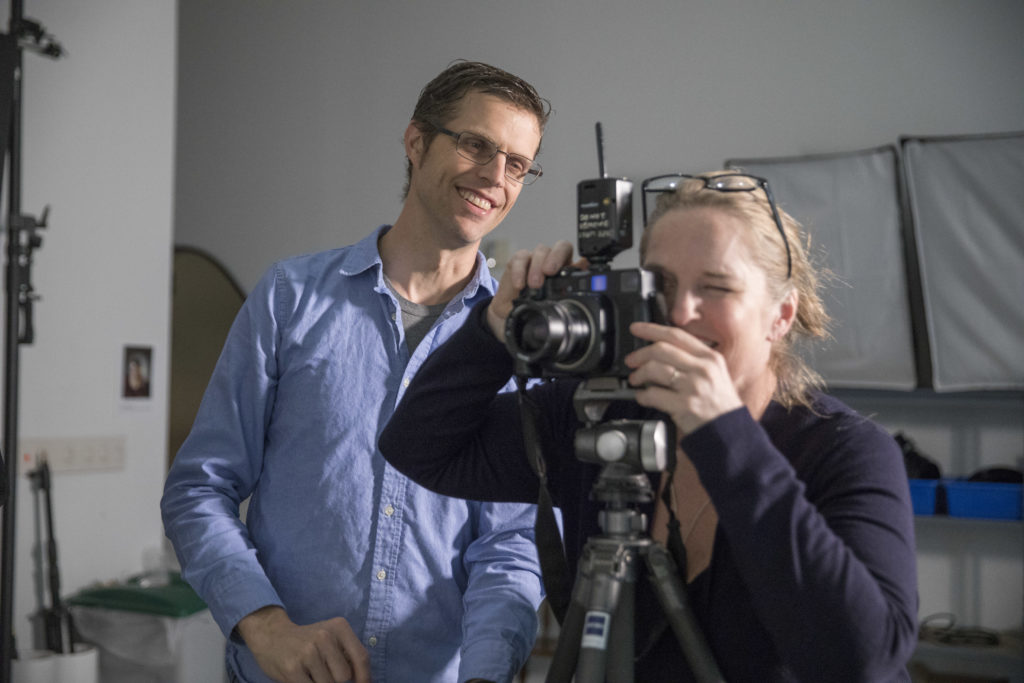 Michael Marshall believes that artists should have a role in facilitating change and shaping the world around them. He has put that philosophy into practice and guides others to do the same.

“Change can be difficult, and I am consistently impressed with Michael’s ability to frame a discussion, keep on topic and his approach toward resolving resistance to change,” said colleague and LDSOA lecturer Eileen Wallace. “His vision for innovation in education and specifically for the Lamar Dodd School of Art is motivating.”

In the classroom, Marshall has an ability to provide students with a balanced approach to facilitation. He gives students ample space to find their own path, while providing institutional support and valuable critical feedback.

“There was never a time when he was not prepared to gift his knowledge to inspire creative and most importantly, to help a student find their own voice,” said former student Joseph Moguel.

Marshall joined UGA in 2001, became the head of the photography area in 2006, and in 2015 become associate director of curriculum at LDSOA. He made changes to the photography curriculum by restructuring the photo concentration to allow more flexibility; reconceptualizing and reforming courses and, overall, guiding curriculum design at LDSOA to expand impact to students and instruction and outreach across campus and to the community at large.

He also has worked to embed service-learning experiences into both graduate and undergraduate classes. Students have engaged with a host of community partners including local nonprofits such as the Athens Community Council on Aging, communities across the state through UGA’s Archway Partnership and Watershed UGA, the campus initiative focusing on the health of campus streams. These courses gave students an opportunity to deepen their technical skills while simultaneously developing awareness and solutions to local community needs with visual art skills.

In 2017, Marshall received the UGA Sustainability Outstanding Faculty Award for his work integrating the arts into sustainability efforts across campus. He is now on the advisory board for Watershed UGA and is a faculty mentor for the Artist in Residence internship position at the UGA Office of Sustainability.

“Michael has a dedication to service that never wavers,” said Marni Shindelman, LDSOA associate professor and area chair of photography. “It is at the core of his pedagogy: To engage students as citizens of a community and problem-solvers of the future.” 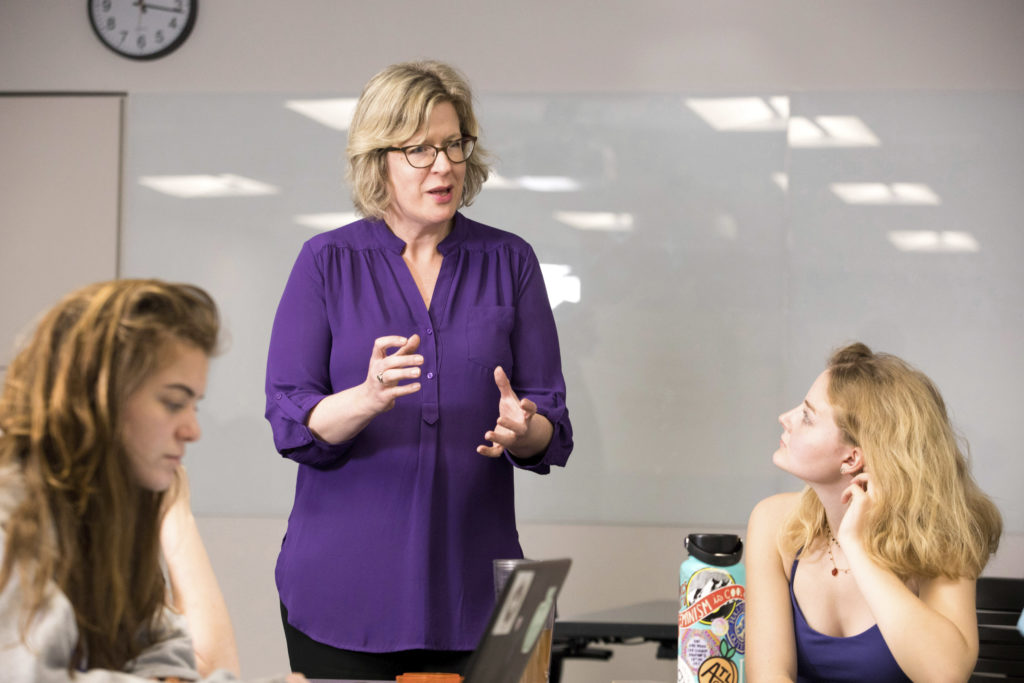 Patricia Richards is known as a demanding instructor who dares her students to accept challenges that make them want to think on a level beyond a single course or grade.

Fostering intellectual excitement in the classroom that inspires students, she helps build some of UGA’s most forward-thinking interdisciplinary programs.

In addition to her joint appointment in the sociology department and the Institute for Women’s Studies, Richards is a core faculty member in the Latin American and Caribbean Studies Institute as well as a faculty affiliate in the Institute of Native American Studies. Her special focus on global and transnational content has led her to introduce a series of courses focused on global issues, particularly those related to Latin America, where she conducts research.

“She has led us to increase the quality of our programs through re-evaluation of our policies and curriculum,” said LACSI director Richard Gordon. “We have been able to teach more students as well as improve the impact of our major, minor and graduate certificate.”

This global perspective translates to a passionate ­approach to critical thinking and research methods that pushes students to develop a broad understanding of the world. Many of her students have said they felt empowered by Richards to take responsibility for their own learning.

“She celebrated the power of my research while asking how and why it mattered,” said Stephanie Shelton, assistant professor at the University of Alabama College of Education.

“Dr. Richards’ teaching style inspired me to take charge of my own education,” said former student Abigail Kahn. “I was enthusiastic to engage with a leader and a teacher who has strong convictions yet can look at her students and allow them to form their own opinions.”

Richards has served on 30 dissertation or master’s committees and directed the work of eight graduate students. Her blend of interdisciplinary expertise has led her to serve on committees of students in numerous disciplines, including political science, journalism, geography, anthropology, public health, kinesiology and higher education. Richards has chaired the biennial Women and Girls in Georgia Conference, which brings scholars and activists from the local, state and national communities to UGA.

“The 2017 conference, whose program was created by Dr. Richards, is yet another example of her ability to extend the classroom beyond four walls and to center her teaching and learning in the relevance of our broader society,” said Juanita Johnson-Bailey, University Professor and IWS director.